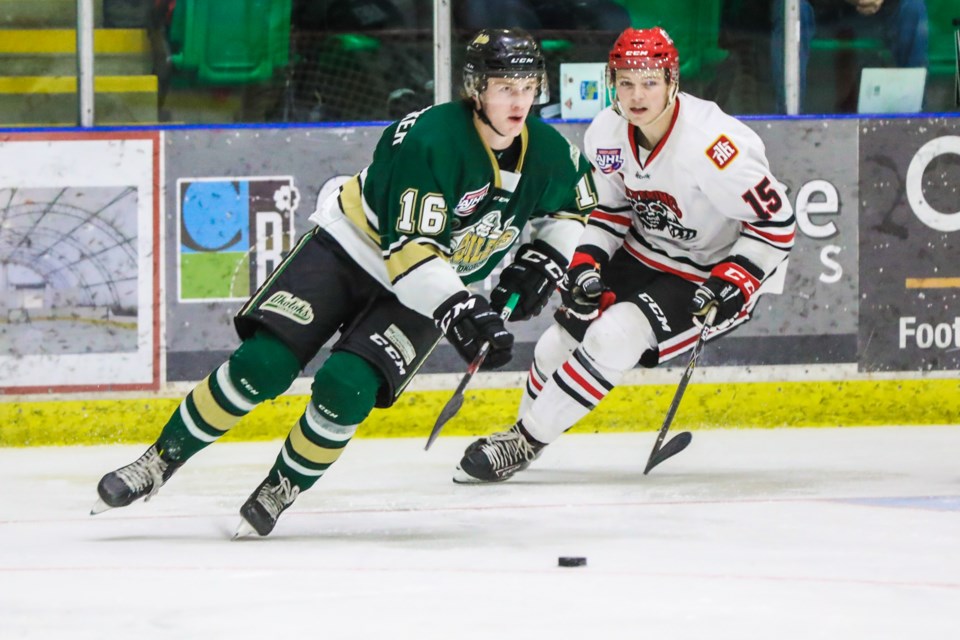 Okotoks Oilers defenceman Seth Bernard-Docker, pictured above skating the puck up ice versus Whitecourt, has committed to the University of Denver Pioneers for the 2021-22 season. (BRENT CALVER/Western Wheel)

After two years of rapid growth the path has been charted from Okotoks to the Mile High City.

Okotoks Oilers defenceman Seth Bernard-Docker earned a commitment to attend the University of Denver Pioneers for the 2021-22 season on the heels of a stellar sophomore year cut short in the playoffs in Big Rock Country.

“It was obviously pretty disappointing not finishing the year, but Denver I had talked to them a little bit earlier,” said Bernard-Docker. “I believe (the Oilers) will have a pretty solid year this year and recently Denver put an offer out and I just really liked the look of it.

“It was a good opportunity and a good place for me to go with the academics and the hockey team and I’m super excited about that.”

The smooth-skating 2001-born blueliner is coming off a career high 5 goals and 32 points in a strong second season with the Green and Gold.

“With my progression in junior, coming from a rookie and last year I think I can have a really good year this year and hopefully be an impact player heading into college,” Bernard-Docker said. “I think I’ve just learned a lot, about the locker room and my skill and my skating, my play on the ice has come a long way as well.

“But my leadership and earning a spot and that type of stuff, Deiser (head coach Tyler Deis), guys that I’ve learned from in Okotoks have really shown me a lot there.”

The Pioneers compete in the National Collegiate Hockey Conference, arguably the top conference in college hockey, against the likes of Colorado College, St. Cloud State, Minnesota Duluth and North Dakota – who feature Seth’s older brother Jacob, a former Oilers standout and first-round draft pick of the Ottawa Senators in 2018.

“I’m excited,” Bernard-Docker said. “I’m sure I’ll get some boos when we head into North Dakota, but I’m looking forward to it and hopefully we can get some wins on them so hopefully I’ve got something to bug Jacob about.”

Denver has a proven track-record of developing defenceman with the likes of Ian Mitchell, Will Butcher and Tariq Hammond – a former Oiler who helped the Pioneers win the 2017 NCAA title.

“It’s a pretty historic hockey program and they’ve also done a good job producing good D over the years with guys like Butcher and Mitchell and some other pretty big names,” he said. “They’re great with the hockey, eight national championships, and also really good academics.

“And having a few buddies from Calgary going in the same year as me is pretty cool.”

In Colorado, Bernard-Docker plans to study business while potentially minoring in sports science.

Before heading south, he’s got some unfinished business on an Oilers squad that appears to be loaded for the 2020-21 season in the Alberta Junior Hockey League.

Back home in Cochrane for the offseason, the 5-foot-11, 176-pound defenceman is making the most of the resources at his disposal.

“We actually have a pretty sweet home-gym here,” he said. “So we’re working out every day and just started working out back at Edge as well- that just opened up. It’s working out lots, rollerblading and shooting pucks to try to keep the edges a little bit fresh and just working a little bit to make some money.