As Canadians from coast to coast commemorated the 40th anniversary of hockey’s most famous goal on Friday there was an Okotoks Oiler who was walking with an extra pep in his step.
Oct 3, 2012 12:00 AM By: Remy Greer 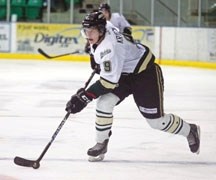 Second-year Oiler Spencer Kryczka has a deep family legacy in hockey as the grandson of Joe Kryczka, Canada&#8217;s chief negotiating officer for the 1972 Summit Series.

As Canadians from coast to coast commemorated the 40th anniversary of hockey’s most famous goal on Friday there was an Okotoks Oiler who was walking with an extra pep in his step.

Paul Henderson’s famous rebound tally in the eighth and deciding game of the 1972 Summit Series lifted the Canadians over the Soviet Union in the historic and trailblazing battle of cultures on the ice.

If it wasn’t for the negotiating prowess of Joe Kryczka, the grandfather of Okotoks Oilers forward Spencer Kryczka, who was Canada’s chief negotiating officer for 1972, the series might never have happened.

“It’s tough that I didn’t get to meet him ever,” said Spencer, 17, whose grandfather lost his battle with cancer in 1991 at the age of 55. “But everyone I ever talk to says he was such a great guy and for him to be able to do something that everyone I come across knows about and says ‘wow that’s amazing’, it’s really awesome to have that in my heritage.”

The rangy Oilers’ forward said he’s constantly learning more about just how integral his grandfather was to one of hockey’s most storied moments.

“I always knew that he was involved, but it seems like every day I find out something new that he did that’s so impressive,” Spencer said. “It was him and another guy who signed the agreement for the series to actually happen and I think a lot of people still don’t even realize that he was pretty much the guy.”

Joe Kryczka, who earned his law degree in 1958 from the University of Alberta, made a meteoric rise through the administrative hockey ranks in the late 60s and early 70s and by 1971 was serving as director of Hockey Canada and president of the Canadian Amateur Hockey Association (CAHA).

Throw in his cultural background, as Kryczka was a first generation Canadian whose parents immigrated to Crowsnest Pass from Poland, the reasons for Joe’s high profile role at the negotiations in Prague become clear.

“He always said he was in the right place at the right time,” said Patrick Kryczka, Joe’s son and Spencer’s father, of Joe’s involvement in the 1972 series. “He spoke I think seven languages, he understood the Russians so he was kind of the secret weapon in the negotiations with Charlie Hay from Hockey Canada.

“He was also a player agent and it was all volunteer for him, it was really all about the game,” said Patrick. “I never saw him much growing up, but he had a real passion.”

Kryczka’s legacy extended far beyond the Summit Series, he was also a major reason for Calgary being selected as the host city for the 1988 Winter Olympics.

“I think for him the Olympics was the crowning achievement,” Patrick said. “The Russians, when they had the vote to move the Olympics to Calgary, they told Frank King, the chair of Olympic Committee for Calgary, that if Joe Kryczka doesn’t run the hockey we’re not voting for Calgary.

“So he was the swing vote because we won it by one vote.”

Kryczka is a member of the Canada Sports Hall of Fame and in the Canadian Olympic Hall of Fame, but is conspicuously absent from hockey’s most hallowed hall.

“He’s not in the Hockey Hall of Fame which is something we’ve kind of pushed for over the years,” Patrick said. “But, with the NHL it’s a difficult process.”

Spencer, the oldest of three siblings, admitted he does have a lot to live up to, but rather than be burdened by the weight of expectation he uses his prolific family background for motivation.

“I just feel I’m really lucky to have such an amazing ancestor like that,” Spencer said. “He’s so smart in so many departments, so involved in the hockey community. I don’t feel like I have any pressure, it’s almost just like another added incentive to do well in school and especially in hockey.”

Spencer, a Grade 12 student at Holy Trinity Academy, is not taking any academic shortcuts off the ice.

“I’ve always kind of considered law, but I think for me engineering is the way I’m leaning right now,” he said.

The Kryczkas haven’t done anything different this year to commemorate the 40th anniversary of the series. Every year the family is reminded of the trail the organizers of the Summit Series blazed for international hockey tournaments between the former Cold War adversaries.

“It’s just more at the forefront of your mind,” Spencer said. “Like seeing the World Juniors go over and play (in the Canada-Russia challenge) and even during the summer how much people get into that type of thing. It’s such an amazing legacy that he’s left 40 years later.

“And you’d almost like to see him get more credit than he does, but I know that he probably wouldn’t really care either way and is just glad that it is what it is now.”

The Kryczkas have kept several relics from the series, including the original agreement framed on the main floor of their house, two Soviet jerseys and a pair of sticks with curves that put modern-day Russian superstar Ilya Kovalchuk’s to shame.

The stick-whacking days of Bobby Clarke at the Summit Series have gradually faded out of hockey, but the same can’t be said for the passionate, albeit more restrained, competitiveness for the game displayed by hockey players at every level. Kryczka’s simple, yet effective, North-South, in-your-face style as a two-way forward for the Oilers is an ode to the way it was in the Cold War series.

“I think the passion is definitely from my grandpa and my dad because they’re both clearly passionate and I think that carries over,” said Spencer of his characteristic intensity on the ice. “Mostly for me that’s kind of the way I have to play to be effective.

“I think this year is going to be a lot of fun because it’s my second year and I’m only 17 and hoping to make a pretty big impact on the league and on the team.”

Spencer has developed into an everyday player for the Oilers as a sophomore and one of the most reliable and consistent workers for Oilers head coach James Poole.

“We’re really pleased with Spencer, he’s still young and we have to remind ourselves he’s only 17,” Poole said. “His work ethic has been solid, he’s been using his size to his advantage, he’s been physical and engaging in battles and become more of a presence out there on the ice.”

A presence the Kryczka’s have earned in Canadian hockey for several decades.