"We're not going to give up, we're going to try and do it again in December here because we're trying to support curling everywhere and give these people places to play. I know the women appreciate it."
Nov 13, 2020 3:55 PM By: Remy Greer 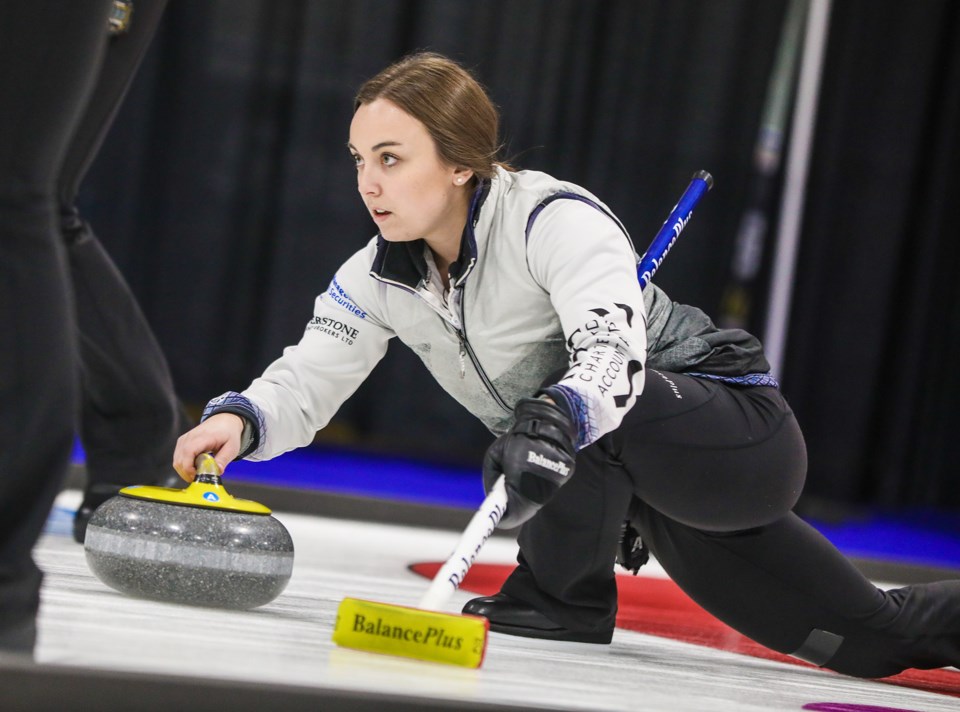 Team Rocque skip Kelsey Rocque, seen here at the 2020 Alberta Scotties in Okotoks, was one of the 12-teams scheduled to compete at the Okotoks Ladies Classic. (Brent Calver/Western Wheel)

What promised to be one of the top events on the Okotoks sports calendar has been sidelined.

The Okotoks Ladies Classic, featuring the top female curling teams in the country Nov. 12-15 at the Okotoks Curling Club, was cancelled after the opening draw following the ushering in of new COVID-19 measures announced by Premier Jason Kenney at a press conference on Nov. 12.

"I had some advance warning the day before a little bit that something might be coming down the line with Hinshaw or Kenney's announcement," said Okotoks Curling Club general manager Mike Libbus. "We just didn't want to believe it and we were hoping it wouldn't affect curling, or affect Okotoks in general, we were hoping it would just be the big centres Edmonton and Calgary.

"We understand where they're coming from, we're just a little bit disappointed that it's affecting sports and that seems to be it right now."

The new measures, enforced in the Calgary and Edmonton areas as well as all of those communities with enhanced status including Okotoks and Foothills County, dictate a two-week ban (Nov. 13-27) on indoor group fitness classes and team sports as well as group singing, dancing and performing activities.

Curling Alberta announced on Thursday all curling in the affected areas is to be shutdown by midnight of Nov. 12 with the enhanced measures in place from Nov. 13-27.

With marquee curling events at a premium this year, the Okotoks event was the first opportunity for many teams, including the newly formed Rachel Homan rink, to compete in the 2020-21 season.

Several teams announced their appreciation to the club for its efforts in putting the event on before it was taken out of their hands.

"A big thanks to Okotoks Curling Club and its volunteers for trying to make a safe go of this weekend's bonspiel," said Team Jennifer Jones in a social media post. "New provincial COVID restrictions coming into place at midnight, however, require sports to pause in much of Alberta. Stay safe everyone."

Members of the defending Scotties Tournament of Hearts champion Kerri Einarson rink, based out of Manitoba, also shared their thanks.

"Thank you to the organizers and volunteers at the Okotoks Curling Club," Team Einarson said on a social media post. "New Alberta provincial restrictions require that the event be put on hold for the unforeseen future.

"We understand the circumstances and the tough decisions that need to be made during these unprecedented times. We look forward whenever we will be able to safely hit the ice again."

The opening draw on Nov. 12 featured the heavily anticipated match-up between Team Jones and Team Homan with the latter earning the 7-1 win through five ends.

"It was the first event of the year for anybody here from Alberta ,for sure," Libbus said. "They were pretty disappointed, there was a lot of upset ladies there, they kind of understand, but they thought we would be able to get through the weekend, all wearing masks and doing whatever they could.

"We are going to try reschedule sometime in December, but we'll see."

The Okotoks Ladies Classic was poised to be the third straight high-level competition held at the Okotoks Curling Club, following the WFG Okotoks Mixed Doubles Classic and ATB Okotoks Classic over the previous two weekends. Okotoks was also the venue for the season opening junior spiel on the first weekend of October.

"We were real busy, that was our fourth event so far this year, we've had zero cases at the Okotoks Curling Club," Libbus said. "We've been extremely busy on trying to make sure everything is safe, keeping our distance, making sure our members and staff and people coming to our building are safe and following the protocols. So it's definitely disappointing that we're putting in all the efforts we can and seeing the results at our facility, but unfortunately still having to miss out on this one.

"We're not going to give up, we're going to try and do it again in December here because we're trying to support curling everywhere and give these people places to play. I know the women appreciate it. I think we've done a good job of not only putting Okotoks on the map in Alberta, but probably in the country. We've received positive emails from the Peterborough Curling Club and our livestreams are getting people watching from all over the world.

"We're definitely the talk in curling and that was our goal, not only to provide a place for people to play, but for people to understand that Okotoks is working hard to make sure curling is successful."

For more information go to okotokscurling.com.