Summers aren’t always meant for relaxation. For Okotokian Alexis Galloway trips to three different Canadian baseball championships in a 24-day span was an absolute grind, but absolutely worth the effort with a trio of national medals to show for it.
Sep 27, 2017 12:00 AM By: Remy Greer 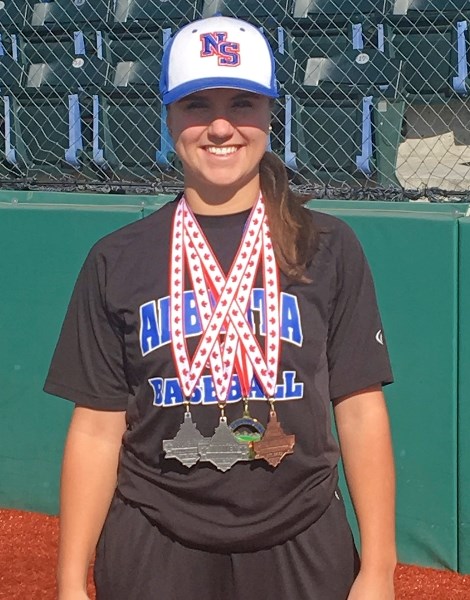 Okotoks&#8217; Alexis Galloway poses with her three national medals won as a member of Team Alberta and Team Nova Scotia during August.

For Okotokian Alexis Galloway trips to three different Canadian baseball championships in a 24-day span was an absolute grind, but absolutely worth the effort with a trio of national medals to show for it.

“I came back and started school a day later. I was exhausted, but so happy with the month,” said Galloway, a Grade 11 student at Holy Trinity Academy. “I was basically gone for the month of August playing ball and all three were the best tournaments I’ve played in.

“It builds my stamina for playing, builds me as a ball player and helps me push myself harder and harder.”

The national preparations were put on pause when Galloway sustained a concussion earlier in the summer.

She along with twin sister Tayler suited up for a makeshift Team Alberta girls team which took home the Midget AA provincial championship playing against the boys.

Alexis had to sit out due to the head injury, but was able to travel with the province to the Senior Open in Windsor, Ont. from Aug. 3-6. Restricted to pitching only due to ongoing issues with the concussion, Galloway helped Alberta claim silver in the veritable all-ages event. Not before sustaining another injury, a sprained hand on a comebacker to the mound.

“I’m playing against women up from the national team so it’s a pretty high level tournament,” she said. “It makes me play better because I want to prove I can play and compete with them and it shows the Team Canada coaches I can compete with women at the national level.”

After holding her own amongst the seniors, Galloway transitioned back to her age group for the U16 championships held in Vaughan, Ont.

The 16-year-old tore it up hitting .389, adding six runs and three RBI en route to the silver medal.

“I had so much confidence going into U16 and it showed,” she said. “That was probably one of my best tournaments.”

Galloway wasn’t quite ready for her national journey to the end.

Alberta didn’t field a team at the U21 championships, but due to a connection to the Maritimes through Dawgs Academy coach Josh MacInnis she was able to put on the Nova Scotia hat for a weekend and take home national bronze from Stonewall, Manitoba.

“At the start it was pretty nerve-wracking. I didn’t know what to expect or what the girls would think of me,” she said. “After that first game I started to feel really comfortable, making lots of friends and I’m pretty sure I will go back next year to the same tournament.

“I hit my best at U21s. I really found my swing there and I absolutely crushed the ball.”

There is another national accomplishment left on the to-do list.

Galloway is striving to make her way onto the Canadian national women’s team in short order.

“I’m really training hard this year because with my concussion and my hand I missed out on going to Washington for the development camp for Team Canada,” she said. “This winter I’m trying to get healthy. That’s my dream is to make that team.”