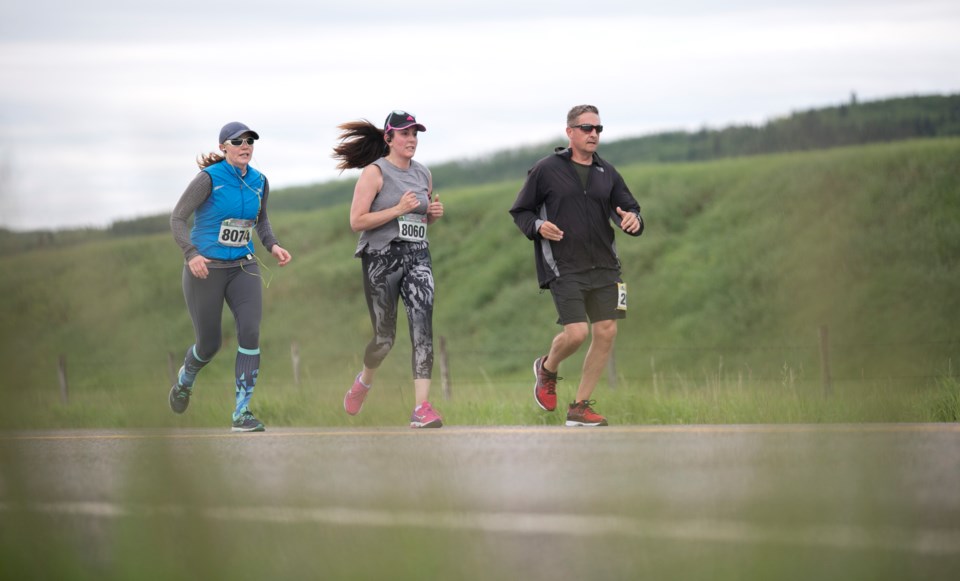 Racers take on the Millarville Run to the Farmers' Market Half Marathon in 2019. The 2020 event will be held virtually in light of the COVID-19 pandemic. (Remy Greer/Western Wheel)

The annual jaunt through the rolling hills of High Country is shifting gears online.

Originally slated for its ninth incarnation on June 20, the Millarville Run to the Farmers’ Market Half Marathon is going virtual after the event had to be cancelled in light of the COVID-19 pandemic.

“The decision to cancel was almost forced on us, we did look at postponing to the fall and were looking at perhaps having the half marathon join up with the Millarville Christmas market,” said race director Rick Charlton. “We investigated that, we investigated postponing to a fall farmers’ market date and in all of those cases we just couldn’t make the logistics fit into later in the year.”

From there, necessity was the mother of invention.

Attention turned to putting on a virtual event as a means to give the participants who had registered for the 2020 race some options going forward.

The options for those who registered are to do the virtual event, to defer the fees to the 2021 race with a discount to regular pricing and thirdly to consider donating their race fees to the Millarville Racing and Ag Society.

“We offered them the potential for a virtual event where they can run their distances anywhere they might happen to be a the time and then upload their results into our database,” Charlton said. “We would be making some draw prizes and trying to create an interesting atmosphere of what kind of unique medal ceremonies we might be able to have.

“Our goal is to mail them their finisher’s medals and shirts and some Cobs Bread cinnamon buns ahead of time and we’re just about there.”

On a normal race year, the 21.1 km scenic course takes runners from the Oilfields Regional Arena through to the Turner Valley Golf Course and down to the famed Millarville Racetrack. The race also offers a relay format, an 8-mile bun run and a 3km trail run.

“It’s unfortunate that we had to be cancelled, we were trending to about a 20 or 30 per cent increase over the prior two years in terms of registrations,” Charlton said. “But that’s the curveball that life throws you sometimes.”

The race culminates with the opening Saturday of the Farmers’ Market, the largest in southern Alberta, and is a fundraiser for the Millarville Racing and Ag Society.

“Because everyone is going to be running on a different course, we’re not going to make it particularly competitive,” Charlton said. “We’re going to be doing draw prizes and things like that, we want to create a fun atmosphere, there’s no first, second or third prize that kind of thing this year.

“The parameters will be they’ll have between June 20 and June 27, on any of those days they can run their event … Once they’re done they can submit their statistics into a link that we’ll provide and hopefully they’ll tag us into some interesting social media pictures or circumstances. We would love to see some pictures of interesting medal presentations and maybe running from a Cobs Bread location or something like that.

“Obviously it’s not a particularly fun moment in anybody’s life right now, but we just want to add a little bit of joy.”

For more information go to millarvillehalfmarathon.com