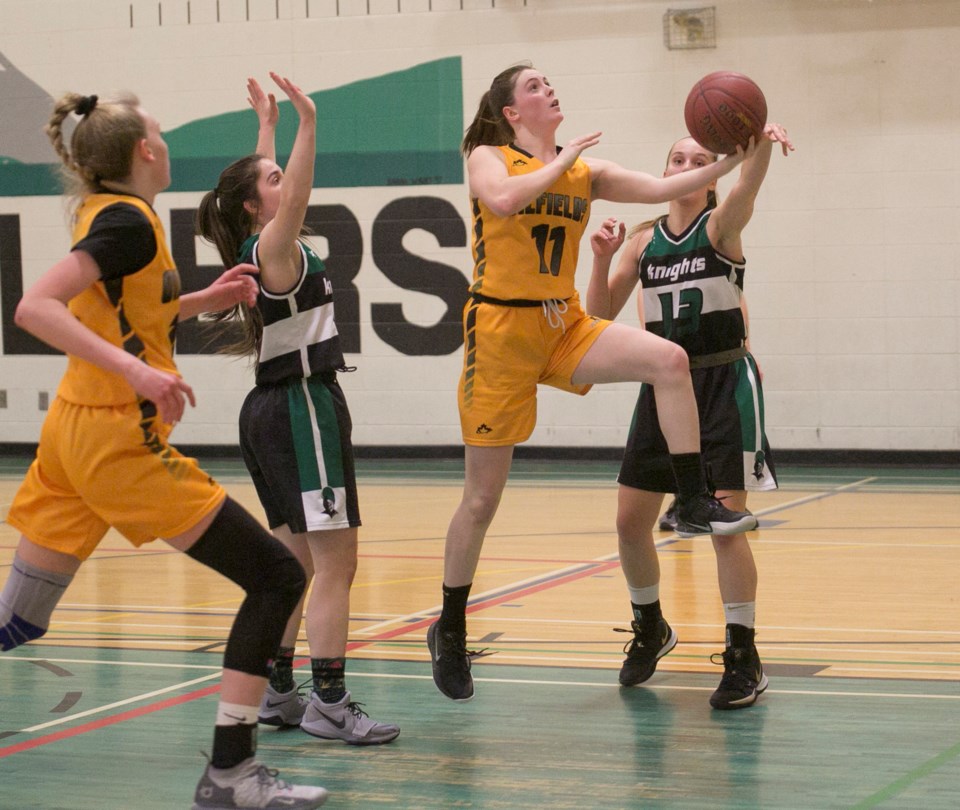 There’s a big buzz being generated at the future site of a beehive of basketball activity.
The Oilfields Drillers earned some just due acclaim as Alberta’s No. 4 ranked team in 2A girls basketball as they get set to host the provincial championships in Black Diamond from March 19-21.
“We’re pretty excited,” said Drillers head coach James Holladay. “I don’t know if Oilfields has ever been ranked, if they have it’s been a long time so it’s kind of added a little buzz around the school, around the community and other people around the province are noticing.
“We went to a tournament last week at Rundle College and we were the talk of the tournament, ‘who are these Oilfields guys? They’re not one of the typical guys at the top of the stack.’”
Coach Holladay and the Drillers are no overnight sensation, it’s a team that has been building up through the ranks highlighted by its JV league championship last winter.
“We’ve had a really good last couple years and now that we’ve moved up into senior it’s been really cool to see how we compare to all the other big teams and big schools,” said Grade 11 Driller Meg Grogan. “And it’s fun to know that we’re competitive with them even though we’re a small school.
“The ranking came out and we’re super excited, it was new for everybody.”
What isn’t new is the team as a whole.
The Drillers group have been teammates for the better part of a half decade and the team chemistry and collective trust in one another is a major reason for their success.
“For me, it’s playing each game in the moment and taking what we get,” said the Drillers’ Erin Grogan. “We’re excited for next year as well as we keep growing and we will see how provincials goes.”
In Foothills Athletic Council action, the Drillers just posted one of their most impressive wins of the season – a 63-59 triumph over the Holy Trinity Academy Knights, Feb. 10 in Black Diamond.
“We’re always excited when we can beat an Okotoks team,” Holladay said.
“They like the perimeter and they like to shoot so we just had to get pressure out there, don’t give them time and close that gap so that they would have pressured shots.
“Our league is a tough league, HTA, Strathmore, STS is in there. League helps us and prepares us for playing at zones.”
Oilfields fought off a three-point deficit in the final three minutes to edge the Knights, its first win in three tries this season versus the Okotoks school.
“Moving up to senior, it’s interesting we kind of have that rivalry with them now,” Meg Grogan added. “Not as big as like the Comp and HTA, but for us, they’re kind of our rivals now. It’s fun to know we’re competitive with them and it’s a new game every time.
“We’re competitive, we make each other work for it, which is awesome.”