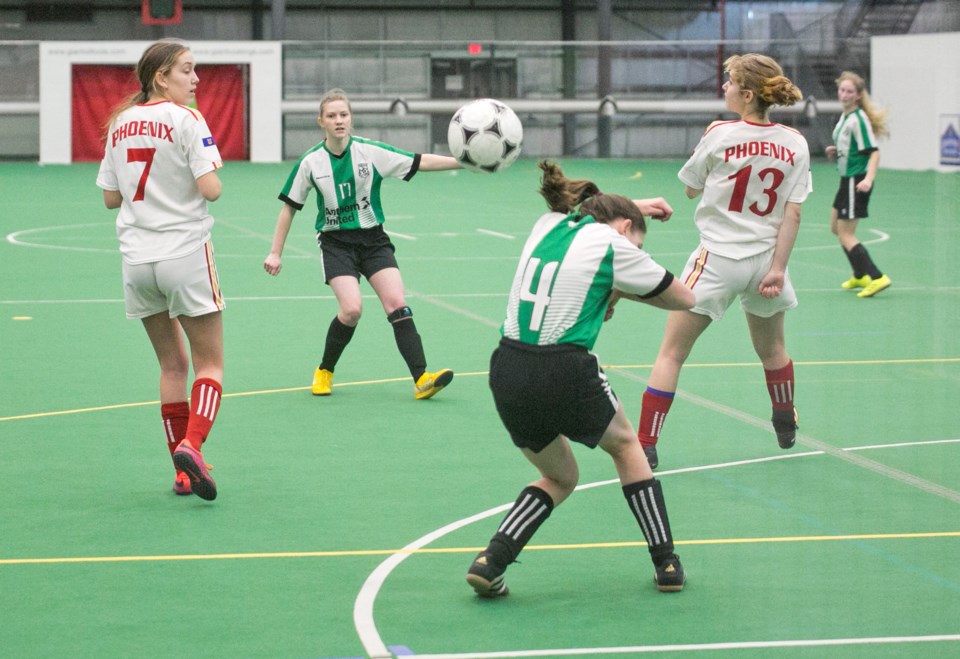 The Alberta Soccer Association provincials championships at U15 and U17 were slated for the March 13-15 weekend prior to the cancellation. (Remy Greer/Western Wheel)

With new measures in place to help prevent the spread of COVID-19 in the province a number of sports events are on hiatus.

After Dr. Deena Hinshaw and Alberta Public Health issued the directive to cancel all large gatherings with more than 250 attendees, a number of high level sporting competitions in the Foothills have been suspended, postponed indefinitely or outright cancelled.

The Alberta Soccer Association postponed all of its remaining 2020 indoor soccer provincial championships, with two of those competitions slated for Okotoks for the March 13-15 weekend.

Okotoks United Soccer was set to host the U15 and U17 girls Tier III competitions at the Crescent Point Field House before the directive by Alberta Public Health and Town of Okotoks to not put on events with over 250 people present.

"While the risk to Okotokians has been categorized as low, the health and safety of our members is of paramount priority to our club. In light of the large gatherings directives provided by Alberta Public Health and the Town of Okotoks on Thursday, 12th March, the decision has been taken to postpone all ASA Provincials and OUSC Recreational Soccer due to be hosted at the Crescent Point Field House this weekend.

"While we understand that this may be disappointing, there are many uncontrollable factors that pose risks to the health and safety of players and our community residents."

"OUSC will continue to monitor all appropriate Provincial and Local directives and encourage our members to take all reasonable precautions at this time to responsibly minimize the spread of COVID 19 within our community. In the next week our club’s Board of Directors and Staff will review the feasibility of Indoor programming for the remainder of the Winter season. We will provide our membership with updates as they are available. At this time, the Okotoks Soccer office will also temporarily close as a precaution. Staff will be working from home and contactable via email."

High school sports have also been sidelined for the foreseeable future.

The South Central Zones for basketball at Holy Trinity Academy, Strathcona-Tweedsmuir School and Oilfields School were called off and the Alberta Schools' Athletic Association announced the basketball provincials have been postponed indefinitely.

The Oilfields Drillers were set to be the hosts of the 2A girls provincial championships from March 19-21.

"Future ASAA Championships and events may be postponed or cancelled depending on the advice of Alberta Health and any Government Agency related directives such as Alberta Education. We again want to state that the health and safety of our membership is our first priority and mitigating the risk of virus transmission between players, coaches, officials, other students, spectators and others has to take precedence over other considerations."

The Drillers were the no. 1 seed going into the South Central zone tournament this weekend and were ranked no. 2 in the province among 2A schools.

Hockey Canada issued a directive on March 12 it is cancelling all sanctioned activities, including national championships until further notice, effective March 13.

The Okotoks Oilers, the top-seed in the AJHL's South Division, were set to begin their playoff series with the Camrose Kodiaks on March 14.

"It is truly an unparalleled day for the AJHL and the game of hockey. I share the feeling of disappointment that exists among our athletes and stakeholders, but it is our responsibility to ensure we are doing what is best for our players, staff, fans, billets, volunteers, officials and communities. We fully support Hockey Canada's decision and it is our desire to continue the season, if and when it is safe to do so. In conjunction with our Board, Partners and Government we will be monitoring the evolving situation."

A further update on March 13 confirmed there will be no post-season in the AJHL.

“We continue to align our direction, consistent with that of Hockey Canada, and support their overall direction completely, “ said CJHL President Brent Ladds. “We extend our extreme gratitude, understanding and commend the due diligence put forth by the CJHL’s Executive Board, each of our 10 league commissioners/presidents, their staffs and respective clubs and Hockey Canada in their commitment to safeguard all those involved in our wonderful game."

The Okotoks Bisons and Cochrane Generals played Game 4 of their HJHL South Final series on Thursday night in Cochrane with the Generals winning 3-2 in overtime and tying the series at 2-2.

In the minor hockey ranks, the Okotoks Oilers Athletic Association teams still in the playoffs also had their seasons cut short.

"It is with much disappointment and understanding that I must share with all you the end to the OOAA season for all our athletes, team officials, families and fans," said OOAA president John Wilson in a statement. "In some cases the season was not done for our teams... and there was unfinished business I understand and feel your frustrations, we recognize the championship seasons you have had and its is completely noted and applauded."

The Okotoks Minor Hockey Association issued the following statement regarding its play being suspended, which includes all OMHA practices, games, tournaments, provincial tournaments and playoff games.

Okotoks was going to be the host of the Peewee Tier I Male provincial championships from March 26-29.

"We recognize the tremendous effort that has been put forth all year by individuals in our community as they participate in Canada’s game. This is without question a tough messages to send out to our OMHA teams and families and it is difficult to process the hockey season ending abruptly, Hockey Canada feels this is the best course of action in order to do our part in keeping our country safe from further spreading COVID-19," said president Geoff Stewart in a statement.

"The OMHA appreciates the magnitude of this situation and sincerely thanks the many stakeholders for their support as we all work through the logistics of this cancellation. We encourage everyone to keep themselves informed of information available through the various health departments as the medical community works diligently to manage the Coronavirus. We thank you for your attention to this bulletin and sincerely wish you well."

Curling Alberta also announced it is postponing all remaining courses and sanctioned events for the 2019-20 season with the hopes of rescheduling events in the future.

The Okotoks Dawgs issued the following statement from managing director John Ircandia on the COVID-19 situation.

"We wanted you to be aware that the Dawgs are closely monitoring the evolving situation respecting the COVID-19 virus. We have instituted a number of preventative measures in our facilities, among our staff and in respect of our youth Academy. We are monitoring the Alberta Health Services website and other pertinent medical links to stay informed and safeguard all aspects of our operation. We are in daily contact with the executive of the WCBL to stay ahead of the curve in terms of the challenges facing the league in delivering another exciting season of summer collegiate baseball.

"At this stage the WCBL has no plans to cancel the 2020 season, but be assured that we will always put the health and safety of our greater Dawgs family, friends and fans in considering options as the season draws nearer."

More to come on OkotoksToday.ca on this developing story.