Lefty gets the call for home-opener

A southpaw has gone from mending his left wing to being the home-opener pitcher for the Okotoks Dawgs. “I was coming off an injury last summer so I only pitched 10 or 15 innings for the Dawgs but I threw pretty well,” Jared Spearing said.
May 31, 2019 11:20 AM By: Bruce Campbell 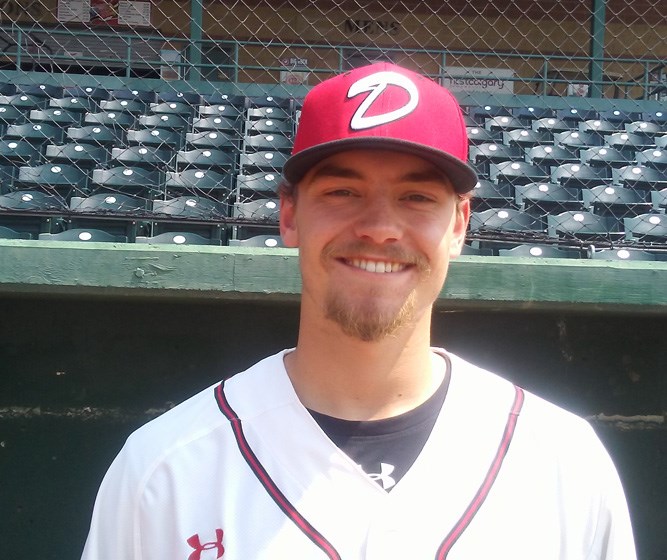 Southpaw Jared Spearing, a Dawgs Academy alumnus, will be on bump tonight for the Okotoks Dawgs home-opener.

A southpaw has gone from mending his left wing to being the home-opener pitcher for the Okotoks Dawgs.

“I was coming off an injury last summer so I only pitched 10 or 15 innings for the Dawgs but I threw pretty well,” Jared Spearing said. “In my school year this season at UBC it was a bit of a slow start but I finished pretty strong.

“I’m hoping to take that strong finish into the summer this season.”

Spearing pitched 9.1 innings with the Dawgs last season with a 3.85 ERA. He had seven strikeouts and allowed one walk.

Respectable, but he’s got the call to take the ball in front of 4,000 fans at a sold-out Seaman Stadium against the playoff-killing Edmonton Prospects tonight at 7 p.m.

As a graduate of the Dawgs Academy he knows what opening day at Seaman is all about.

“I don’t know if I have been on a mound for a sellout crowd, but I have pitched on days when it’s darn near full,” he said with a smile on Wednesday. “I’m excited, I’m nervous about it, but it’s all good nerves.

“I want to get out there and throw well for the fans. They’re great, I want to put on a good show for them.”

His approach is a little heat followed by the deuce.

“I like to establish early with my fastball and then get a lot of outs with my curveball,” Spearing said.

The Dawgs started the season by downing the Brooks Bombers 14-5 May 28 in Brooks.

There were six current Dawg Academy players or alumni in the starting line-up for Okotoks for the season opener.

“It’s a pretty familiar team with the atmosphere, I think guys know what to expect coming into games and I thought that really helped us,” Spearing said. “Guys like me who have been through the program and seen games here, can really help the new guys get comfortable fast.

“We were able to gel really fast.”

Dawgs starting second baseman Tristan Peters, an academy alumnus, went 5-for-6 in the season-opener for Okotoks.

Brendan Logan picked up the win for the Dawgs in the season opener, coming in relief as Okotoks battled back from a 5-1 deficit.

Okotoks will host the Fort Mac Giants the next two nights after the home opener, with Saturday’s game going at 7 p.m. and Sunday is a matinee at 2 p.m. at Seaman Stadium.

Dawgs bites – The Brooks Bombers starting leftfielder and lead-off hitter was Danny Donnelly, who grew up in Okotoks, and graduated from Holy Trinity Academy. Double D went 1-for-4 against his former team, the Dawgs.