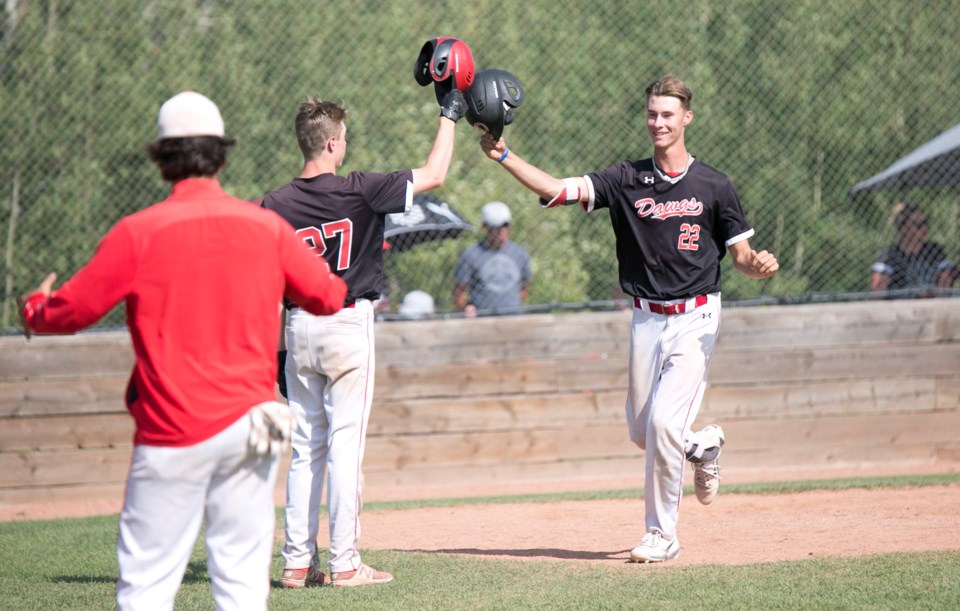 Okotoks 15U Dawg Conor Pote celebrates a home run at the provincial championships in Okotoks in August. Pote was named Baseball Alberta's 15U AAA Player of the Year in November.

An Okotoks 15U Dawg has proven he’s ready to add six feet in pitching distance to his game.

Conor Pote was selected Baseball Alberta’s 15U AAA Player of the Year after posting impressive numbers, but more importantly to him, helping the Black 15U Dawgs win a provincial baseball title.

“The ultimate goal is winning everything and that’s what we did,” Pote said. “I am really proud of that.”

He has plenty to be proud of as he was a major contributor to the Dawgs’ success.

When he’s not on the bump he’s at the hot corner.

“I like third base because you always have to be ready,” Pote said. “I think it’s an important position.

“But pitching is definitely my favourite position. I jut like the competition. You have to outwork and have to beat him (the batter). You can’t do it halfway - you have to put everything into it.

“It’s great having that feeling when you strike someone out or get three outs in a row – almost domination over them.”

Pote got to feel great quite often during the season. He was 7-1, allowing 10 hits over 45 innings. He had 98 strikeouts and had an ERA of 1.85 (stats include tournament play and the Alberta NorWest AAA League).

The right-hander can be intimidating to his opponents. The Grade 10 student has a Stephen-Strasburg-like presence at 6-5, 190 pounds.

Pote said his best pitch is his fastball which has been clocked at 90 mph —  downright frightening for batters as the distance in 15U baseball, 54 feet from the rubber to the plate.

“I am aggressive,” Pote said. “When you are in the box and I am on the mound, you are going to get my best every time I am out there.”

He recalled a big impact moment for him and the team was a victory over the North Shore Twins in B.C.

“We won 2-0 in extra innings and that’s when we realized the potential we had to get to nationals,” Pote said. “I had a go-ahead triple and a single.”

On the mound, he threw a gem in the provincial championship semifinal, a 7-2 Dawgs’ come from behind victory over the St. Albert Cardinals on Aug. 4 at Conrad Field in Okotoks.

The 15U Black Dawgs went 35-0 in the Alberta NorWest AAA League, en route to winning provincials in Okotoks in August.

All that is behind Pote. His goal is to make the U18 Black Dawgs, the elite squad within the Dawgs Academy.

It means he will have to pitch from the major league distance of 60-feet, six inches to the plate.

“I’m looking forward to it,” Pote said. “I’m excited to see what I can do at 60. It will be the same to just go out there and compete.”
His long-term goal is to take it one step at a time with the Dawgs and hopefully earn a scholarship and get drafted.

He has the pedigree.

His father, Lou Pote, played five years in the major leagues, earning a World Series ring with the Anaheim Angels in 2002.

Lou Pote was also on the coaching staff of the 15U Black Dawgs, along with head coach Allen Cox and Tyler Hollick.

Dad is paramount in Conor’s success.

“He taught me everything I know, to go out there and give 100 per cent and compete all the time,” Conor said. “That’s what he did and it got him to the majors.

“Hopefully, I want to follow in his footsteps and get there one day.”

He said he’s in the right program to do it.

“The Dawgs have made me the player I am and they are going to continue to develop me,“ Conor said. “They keep it loose and fun, just ask you to do the best. If you lose, learn from it.”