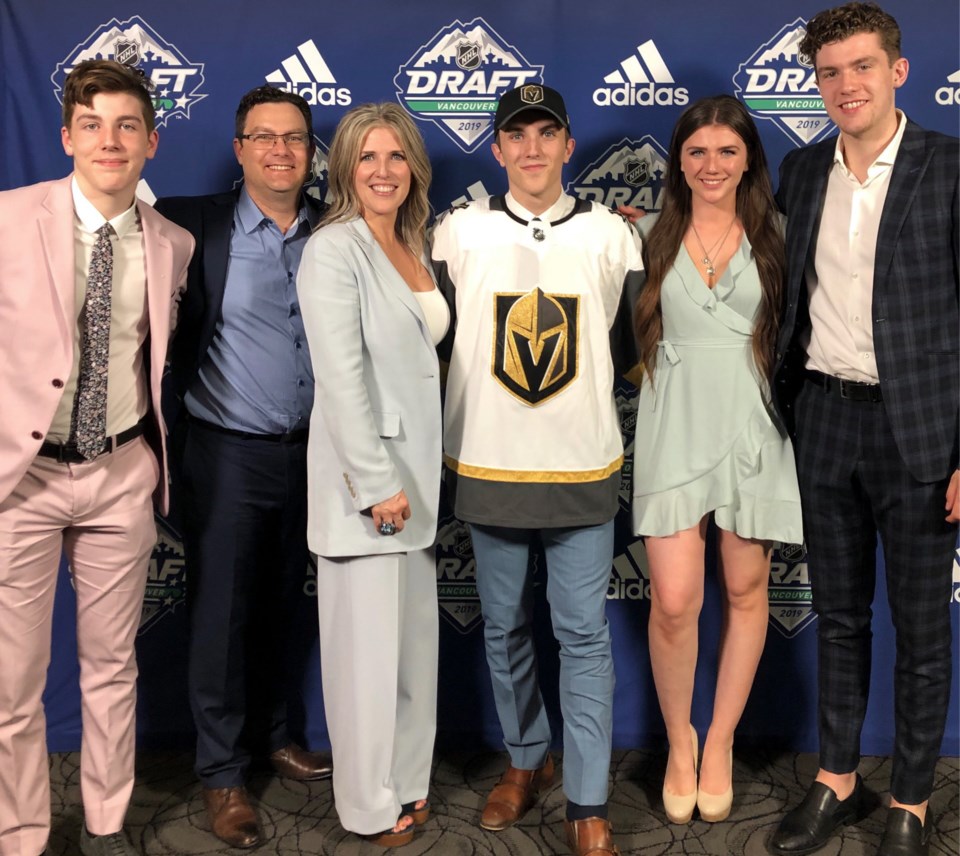 Peyton Krebs, third from right, poses with family at the 2019 NHL Entry Draft after being selected 17th overall by the Vegas Golden Knights. Krebs made his NHL debut on May 3, 2021 against the Minnesota Wild. From left: Dru Krebs, Greg Krebs, Cindy Krebs, Peyton Krebs, Maddison Krebs and Dakota Krebs. (Photo submitted)

Peyton Krebs made his National Hockey League debut one to remember.

The Okotokian suited up in his first NHL game with the Vegas Golden Knights, picking up an assist in the team’s 6-5 road loss to the Minnesota Wild, May 3 at the Xcel Energy Center.

“He jumped right in with both feet, looked confident, made plays.”

Krebs, the Golden Knights’ 17th overall selection in the 2019 NHL Entry Draft, was lined up in the third line centre role flanked by veterans Alex Tuch and Nicolas Roy.

It took less than one period for the trio to connect.

The 20-year-old used his trademark vision to find the fleet-footed Tuch with speed entering the zone and the power forward found the back of the net at the 12:20 mark of the opening frame as Krebs picked up his first NHL point via the primary assist.

Krebs finished the night with 9:05 minutes of ice time, was 80 per cent in the face-off dot and was a +1 on his debut.

“I wish I could have got him out there more,” DeBoer added. “He deserved to play a bit more the way he was playing.”

Krebs met with media the following afternoon to reflect on the emotional experience of reaching the NHL.

"It was obviously a really fun day, pretty emotional too, it's been a long time coming," he said. "Not having my parents here definitely sucked, but I was face-timing before the game and a few tears, for sure, it's a special moment for my family and I.

"During the game, I just tried to get into it and get the nerves out and, I think, by the second period I felt really good. Every time I went out on the ice I just tried to make a difference."

He entered the Show on a roll.

The Winnipeg ICE captain was the Western Hockey League’s Player of the Month for April.

The 5-foot-11 forward tallied 7 goals and 25 points in 14 games leading Winnipeg’s charge to a 12-1-1 finish to the season inside the WHL Bubble in Regina, featuring the league’s teams from Saskatchewan and Manitoba.

Krebs set an ICE franchise record with a 23-game point streak to conclude the season, a run that included seven multi-point games and two four-point performances. His 43 points is tops in the WHL at the time of his NHL debut.

When asked about the biggest adjustments to the pro game, Krebs noted a couple key differences from the junior level.

"For me, it's just the bigger bodies," he said. "Obviously in junior there's not 30 year-old men coming at you and trying to hit you, that was the big difference.

"I think the speed felt good for me, I felt fine in that sense. And then just getting confidence in the systems and what Pete wants us to do on the ice."

An Okotoks minor hockey star that rose through the ranks, Krebs helped the Rocky Mountain Bantam AAA Raiders to its first provincial championship in 2015 and followed it up with a Western Canadian silver medal the following season. He played one season with the CFR Bisons before moving up to the junior ranks full time with the ICE organization in 2017-18.

Krebs has represented Canada at several international tournaments and had a sterling performance at the 2021 World Junior Hockey championship helping the host team a silver medal showing in Edmonton.

The Golden Knights sit first in the NHL’s West Division with 74 points, just three points off the Carolina Hurricanes for top spot in the league.

Vegas, which has clinched a playoff spot for the fourth year in a row, has five games left in the regular season.

For more information go to nhl.com/goldenknights