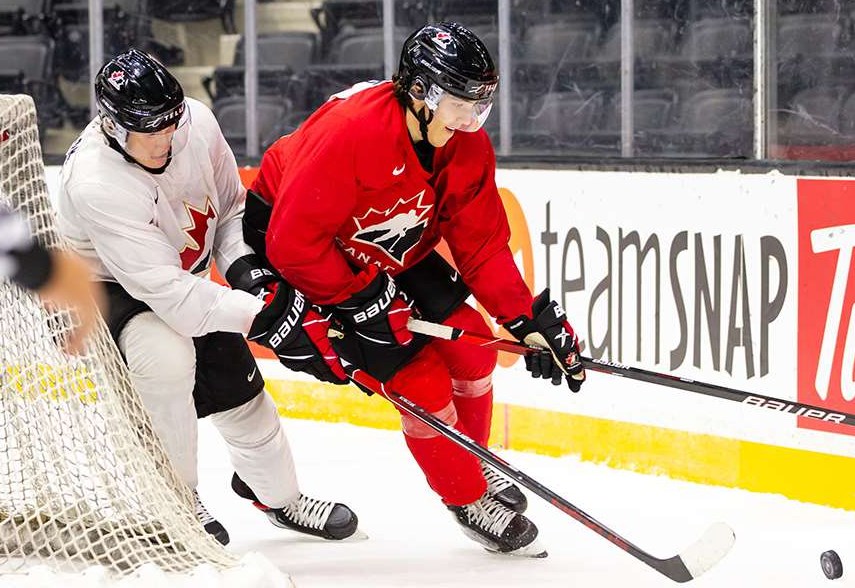 The holiday season just got a little brighter for Foothills hockey fans.

One year after narrowly missing the cut, Okotokian Peyton Krebs and former Okotoks Oilers star Dylan Holloway have skated their way onto one of the most stacked Canadian rosters in recent memory as two of the players to make the grade for Team Canada at the 2021 World Junior Hockey Championships.

“It’s an unbelievable feeling,” Holloway, the Edmonton Oilers 14th overall pick in 2020, told media. “Growing up World Juniors at Christmas time was the biggest deal ever so being able to play in that is an absolute dream come true.”

Bragg Creek’s Holloway, a sophomore forward at the University of Wisconsin after starring up-front for the Okotoks Jr. A Oilers from 2017-19, has previously worn the maple leaf at the World Junior A Challenge, World Under-17 Hockey Challenge, the IIHF U18 World Hockey Championships and at the Hlinka Gretzky Cup.

Krebs, the Vegas Golden Knights’ first-round pick in 2019, is also no stranger to representing Canada having done so at the U17 and U18 levels highlighted by a gold medal triumph at the Hlinka Gretzky Cup along with Holloway in 2018.

The two Foothills area skaters have more than the maple leaf in common with Holloway billeting with the Krebs family during his tenure with the Okotoks Oilers.

The 2021 World Juniors are taking place in a bubble set-up in Edmonton with the competition getting underway on Christmas Day.

Krebs, the captain of the WHL's Winnipeg ICE, was a black ace with the Golden Knights during their playoff bubble experience in the provincial capital earlier this year.

Getting back to Edmonton was no easy feat for the prospective Team Canada skaters.

It was a gruelling tryout process with 46 evaluation camp invitees centralizing in Red Deer for 26 days and the players and team staff being forced to quarantine for 14 days after two players tested positive for COVID-19.

“This camp has been unconventional from the outset with the number of players invited and the length of camp, along with the schedule adjustment due to our two-week shutdown, but we feel we have selected a group that will give us the best chance to defend our gold medal on home ice,” said Alan Millar, Hockey Canada’s U20 lead for the program of excellence management group, in a release. “It is never easy making decisions to trim down a roster, especially when every player handled adversity, faced challenges head on and remained committed to the process through our off-ice workouts and Zoom sessions.

“We have a lot of people to thank, including the people of Red Deer, the Red Deer Rebels (WHL) and Alberta Health Services, who worked with us to always ensure the health of safety of our athletes, staff and the community at large, and we look forward to representing Canada in Edmonton.”

The Canadian roster features a staggering 20 first-round picks, including two skaters with NHL experience in Kirby Dach and Thomas Harley along with three others who were part of the league’s playoff bubble in Krebs, Bowen Byram and Connor McMichael.

Team Canada, 18-time winners of the competition and title holders in two of the past three years, opens it 2021 World Junior Championship slate in a Boxing Day battle with Germany.

The Canadian team is in Pool A along with Germany, Finland, Slovakia and Switzerland.

The tournament and pre-tournament action, which gets underway on Dec. 20, will be aired on TSN and the TSN Radio networks.

For more information go to 2021.worldjuniors.hockey.