Knights MVP stars in the classroom 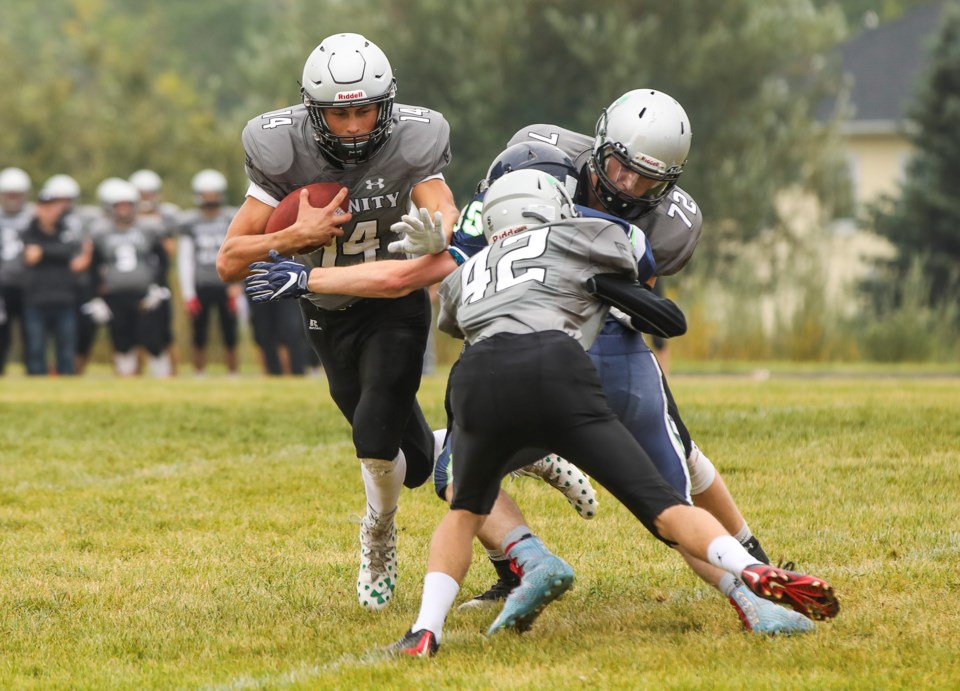 Football has given the 2019 Holy Trinity Academy Knights most valuable player more than a championship ring over the past 10 months.

It has also given an opportunity for Noah Gutek to continue to shine both in the classroom and the gridiron.

Gutek, a slotback for the Knights, received a $2,000 Rural Alberta Football Scholarship from Football Alberta.

“I was extremely surprised,” Gutek said about receiving the scholarship. “It was definitely a shock.”

Gutek has signed with the defending Vanier Cup champions, the University of Calgary Dinos.

He has been giving opposing football coaches for the past two years a shock with his athletic ability.

The versatile Gutek shared quarterback duties with Ben Leggett in Grade 11, before taking on more of a receiver/slotback role in 2019.

He was the catalyst of the Knights’ high-octane offence. HTA won the 2A provincial championship by downing the Austin O’Brien Crusaders 35-3 in Raymond last November.

The duo of Leggett and Gutek were just as formidable in the classroom.

Leggett has received an engineering scholarship at U of C.

“We pushed each other in sports as well.”

Gutek finished with a 90 per cent average at HTA.

Impressive, but Football Alberta was looking for someone who goes beyond football and the classroom.

Gutek had to apply for the Football Alberta scholarship.

“They were looking for a well-rounded person,” Gutek said. “Other than football, they were also looking for work in the class and in the community.”

He plans to take finance at the University of Calgary.

“I feel it is really applicable right now,” Gutek said.

He also could have joined Leggett, Gutek was accepted into engineering but opted for finance.

Gutek said academics has always been no. 1.

“I always put school first,” Gutek said. “Football is fun and stuff and it can take you places but you need school as a back-up and to get on with the rest of your life.”

He said coach Matt Hassett and the Knights coaching staff put an emphasis on academics.

Gutek chose the U of C because of its strong coaching staff and its winning reputation — as well as the well-known business school.

“I also wanted to be close to home so I can see my brothers (twins Jack and Luke) play for the Knights,” Gutek said.

As for next year, with the Dinos, the season is on hold due to COVID-19. He said he hopes to practice and play in some potential exhibition games with the Dinos this season.