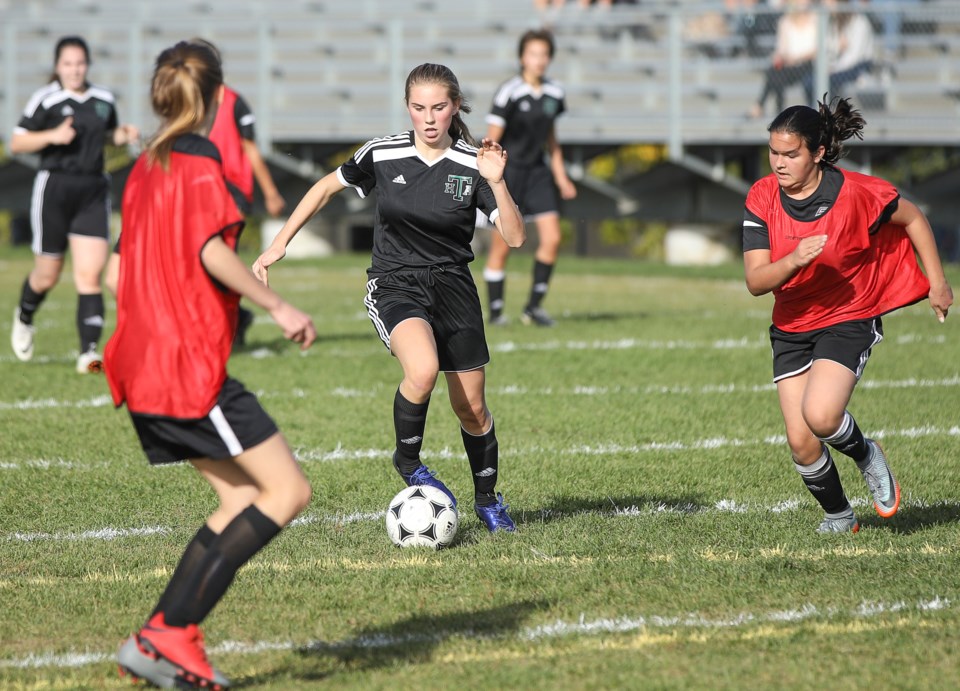 The drive for four straight starts this week for the Knights.

Holy Trinity Academy will look to build on its three straight Foothills Athletic Council senior girls soccer championships with a new group on the pitch with the regular season kicking off in the four-team loop.

“We will continue trying to play exciting, attacking and hopefully good-to-watch soccer,” said Knights head coach Peter Mundy. “We have many multi-sport athletic and talented soccer players coming through in the group of rookies, so our speed and endurance will be major strengths.

“If we can add a similar atmosphere in the squad, as we had last year, we will be difficult to beat.”

It will be a different group wearing Knights colours on the pitch.

The 2019 graduating class of Lucy Mundy, Lauren Sinclair, Abbie Wade and Andrea Lafont were part of all three championship teams.

Returnees to the lineup include Grade 12s Tristin Tate and Brielle Masse, the team’s leading scorer for two years running.

The team will be deep this season with 20 players on the roster, including nine seniors, nine Grade 10s and two Grade 11s.

“We had four very strong Grade 12s graduating,” Mundy said. “They aren't easy to replace, but there are a strong group of rookie Knights coming in and a strong core remaining.”

The FAC is down to four teams this year with the Knights, Foothills Falcons, Strathmore Spartans and Canmore Crusaders vying for the FAC crown.

The Knights were undefeated last season in both league and zone play.

HTA earned its elusive zone championship at the expense of the Cochrane Cobras last fall.

“Repeating that success will not be easy,” Mundy said. “But we'll give it a go.”

The season kicks off this week.

Foothills is in Canmore on Sept. 17 while the Knights are home to the Spartans.

The Falcons and Knights meet for the first of two match-ups during the season on Sept. 19, a 4:30 p.m. start at the Comp.

New this season, the playoff format will not have semifinals and instead the league winner will be decided with the top two seeds battling it out in the championship match.

The gold and bronze games are slated for Oct. 8.