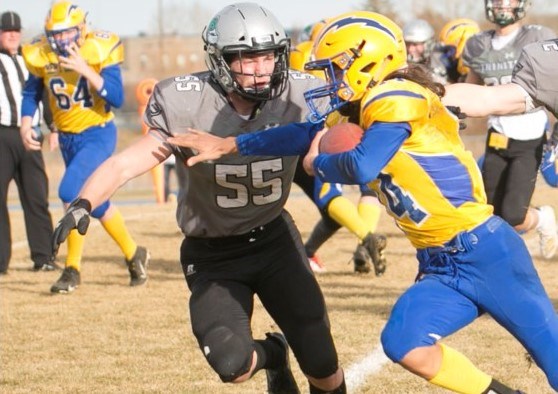 A family tradition is set to continue at the University of Saskatchewan.

Strathcona-Tweedsmuir senior and Holy Trinity Academy Knights linebacker Jack Dutton committed to the University of Saskatchewan for 2021-22 where he hopes to build on a considerable lineage on the Huskies gridiron where his father Rob won the Vanier Cup in 1990.

“Growing up I heard he was a really good football player, playing at 17 as a starter and won the All-Canadian award for his position at U of S,” said Dutton, who lives in the Priddis area. “I also have lots of family there so I’ve been there lots and it was always something that I wanted to go to, the U of S.

“As I got older I did look elsewhere a bit, but always had a thing for going to university here.”

Dutton, a 6-foot-1, 215 pound ferocious open-field tackler for the Knights, will have some familiar faces both on campus and on the field in the Paris of the Prairies.

His sister Allyson is a junior at the school while the Huskies football program features Dutton’s two-year teammate on the Knights front-seven in Alex Leggett along with his older brother Jon – a fourth year defensive lineman who starred at linebacker and running back at HTA. Knights grad Charlie Power, a special teams ace with the Calgary Stampeders, played linebacker at U of S before embarking on his professional career.

As well, long-time Knights football announcer and coach, Jason "JO" Olynyk was a teammate of Jack's dad on that 1990 Vanier Cup champion squad.

“The big deciding factor was mostly my family, how I have a lot of support there,” said Dutton, who plans to study in the kinesiology and education fields. “My aunts and uncles, lots of cousins and my sister is there currently. It seemed like the right choice to go there.”

Though not a HTA student, Dutton said he’s always been made to feel a part of the Knights family since debuting with the team in Grade 10 as STS does not have a football program.

“It’s been a little challenging trying to balance the academics at STS and still be able to come to practice, but the schedule they’ve had for football has been really helpful,” said Dutton, who’s also competed in basketball and cross-country for the STS Spartans. “Also the kids at the school are really nice and friendly. When I first stepped in here there was no judgement at all, it was just hey welcome to the team, we’re glad you’re here and I just fit in with all these guys.”

He also made a considerable impact, making the Team Alberta U18 squad in his Grade 10 year and forming an imposing linebacker trio with teammates Michael Peloso and Grady Hale in Grade 11.

Dutton was a key cog in the Knights’ Tier II provincial championship in 2019, the school’s first in program history.

“That was a really big deal because it was the first time we had done it,” he said. “It was really exciting and the road we got there was very challenging. The Cardston game was probably the toughest because they were the only team to technically beat us in jamboree. That game was a really big highlight for us.”

It’s been a difficult adjustment to the practice-only start to the 2020 football season in light of the COVID-19 pandemic for Dutton, but business is picking up with the Knights playing small-squad jamboree style games with Strathmore this week.

“It was a little challenging at first because there were so many kids that wanted to play games, but without actual games to look forward to it was hard to keep us motivated,” he said. “But after being in quarantine for four or five months it just felt good to be out there in pads and be with the guys and play some football.

“Once we heard about these games things changed and we’re all now pretty excited and motivated for this game (on Oct. 16).”