Knights buffaloed out of bronze

The Holy Trinity Academy Knights got off to a slow start in the bronze medal game at a girls’ basketball tournament and were buffaloed off the podium.
Jan 12, 2011 12:00 AM By: Bruce Campbell 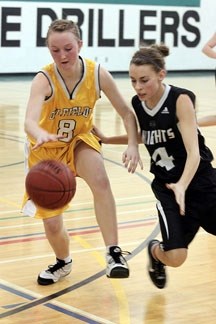 The Holy Trinity Academy Knights got off to a slow start in the bronze medal game at a girls’ basketball tournament and were buffaloed off the podium.

The Knights were beaten 41-37 by the Brooks Buffaloes in the third place game at the Catholic Central Cougars girls’ basketball tournament on Saturday in Lethbridge.

“We seemed to be a second half team,” said Knights assistant coach Kevin Crawford. “Especially when we played Brooks.”

The Knights struggled with Brooks’ zone defence and fell behind by as much as 17 points in the third quarter, however, they battled back.

“We played a fantastic fourth quarter and we cut the lead to four points,” Crawford said. “If the game would have been two minutes longer, I think we would have won it.”

Rookie Knight Ryan Kennedy was named the player of the game in the loss to Brooks as she finished with five points and an impressive 14 rebounds.

It was a battle of two top 10 teams. The Buffaloes are ranked fifth in the Alberta Schools Athletic Association 3A rankings and the Knights sit at number seven.

The Knights opened the tournament by downing Hunting Hills from Red Deer 54-48. Kristin Ford was named the Knights’ game star in the victory. The hard-working Ford finished with 15 points, eight rebounds and eight steals.

Monique Ouimet showed quicker hands than Annie Oakley as she had 11 steals.

The Knights improved their record to 2-0 in the tournament by slipping by Mount Baker from Cranbrook 54-49.

“Mount Baker is always very feisty,” Crawford said. “They weren’t as good as they have been in the past but they were still a good test for us.”

Bethany Hartman was the Knights’ game star finishing with 14 points and five rebounds.

The Knights got their first blemish of the tournament when host Catholic Central beat them 64-45 to drop Holy Trinity Academy (HTA) to 2-1. However, this blemish was more of a beauty mark as Catholic Central is a strong 4A school.

“They have one post who is a solid six-foot and she was a load for us,” Crawford said. “They also have a point guard who is one of the best in the province. They are a very strong team.”

The Knights hung in there despite the score.

“We were down only by six at half time,” Crawford said. “Then in the second half, their big girl really started to wear on us inside.”

The loss dropped the Knights to the bronze medal game against Brooks.

The Knights improved their record in the Foothills Athletic Council to 4-0 by beating the Oilfields Drillers 69-43 Jan. 5 in Black Diamond.

“That is a hard-working team, they don’t take a minute off,” Power said. “I told the girls at half-time, that if we don’t start to match their intensity, we are going to lose this game.”

The Knights gained a stranglehold on first place by beating the Strathmore Spartans xxxxxxxx on Monday night at HTA.

To see the FAC standings see Scoreboard on page xxxxxx.

The Knights’ next game is Friday when they play the Falcons at Foothills Composite High School at 5:30 p.m.

There will be no FAC action after Friday’s games until Jan. 31 due to final exams.