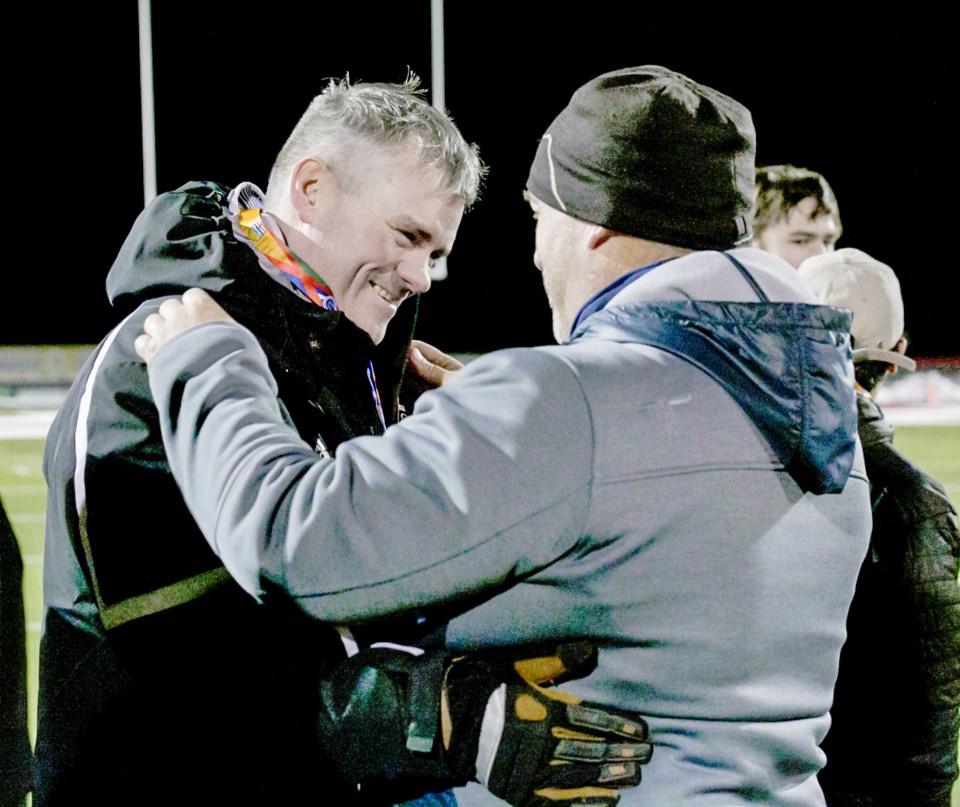 The breakthrough season culminated in a bookend award.

“It’s a nice honour and I think at this point in my career it really is about the coaching staff, for me,” said Hassett on Victoria Day. “We’ve really built a good coaching staff over the last number of years, they all put in a lot of work and do a great job.

“That’s what I told (Football Alberta), this is more a reflection of us as a staff as opposed to one person.”

“Long-serving coaches and others that have come in recently have made just a great mix of guys,” Hassett said. “They all do just a great job.”

Hassett, a physical education and science teacher at HTA along with athletic director duties, is by far the longest serving head coach at the school having initially taken on the role in fall 1999. During his tenure, two Knights players have moved on to play in the Canadian Football League in Charlie Power, a fullback and special teams player with the Calgary Stampeders and Ryder Stone of the Montreal Alouettes.

“One of the things I’m most proud of is we’re one of two or three teams to qualify for provincials at three different levels, Tier IV, Tier III and Tier II,” he said. “Over the years it seemed just as we were getting to the top of one division we got moved up.

“I remember one year we were ranked number one in Tier IV and the numbers came in and we were six students over and then had to play the Cochrane Cobras and that was a very different beast.

“We’re about athletics (supplementing) and helping kids get through school and helps them perform better in the classroom. We always try to get them better on the field, but it’s all about them taking care of their responsibilities and having things in the right priority.”

The Knights were initially a Tier IV team, for schools with enrolments of fewer than 449 students. The growth of population at the school coincided with the football program’s development with the Knights competing in the Tier II ranks.

“When you look at other coaches that you look up to a lot of them have moved around a lot,” Hassett said. “Coaches, teachers, even some of my old coaches have moved schools or even school divisions. Bryan Brandford has been at several different schools and I think it’s kind of unique to have my whole career with pretty much one team.”

The third time was the charm as the Knights knocked off Edmonton powerhouse Austin O’Brien 35-3 in November at Raymond’s Comets Stadium and brought the first provincial championship in program history back to Okotoks.

“It started for this group when we were watching Lloydminster get their gold medals (in 2018),” Hassett said. “They were from day one really focused, really dialled in. I remember our quarterback Ben Leggett at the end of last year on the field in Fort Mac, watching them get their gold medals and saying ‘we’re getting to this game next year and we’re winning.’

“The dedication, the leadership of the seniors and we just had a really solid, athletic group and they just weren’t going to be denied.”

Going forward, Hassett and the Knights have the potential to return another contending team to the gridiron. If and when football returns in light of the COVID-19 pandemic is the question.

“One of the things we wanted to guys to rally around was don’t waste the opportunity,” Hassett said. “They’ve done it, we’ve been there a few times now and were able to win it and now we firmly believe winning is a habit. The more you can do it, the better it is and the expectations are always up there.

“This group we’ve got coming back is exceptionally talented as well, hopefully we get to play. It looks like things are starting to loosen up and hopefully everything stays on course and we can all have our seasons back.”