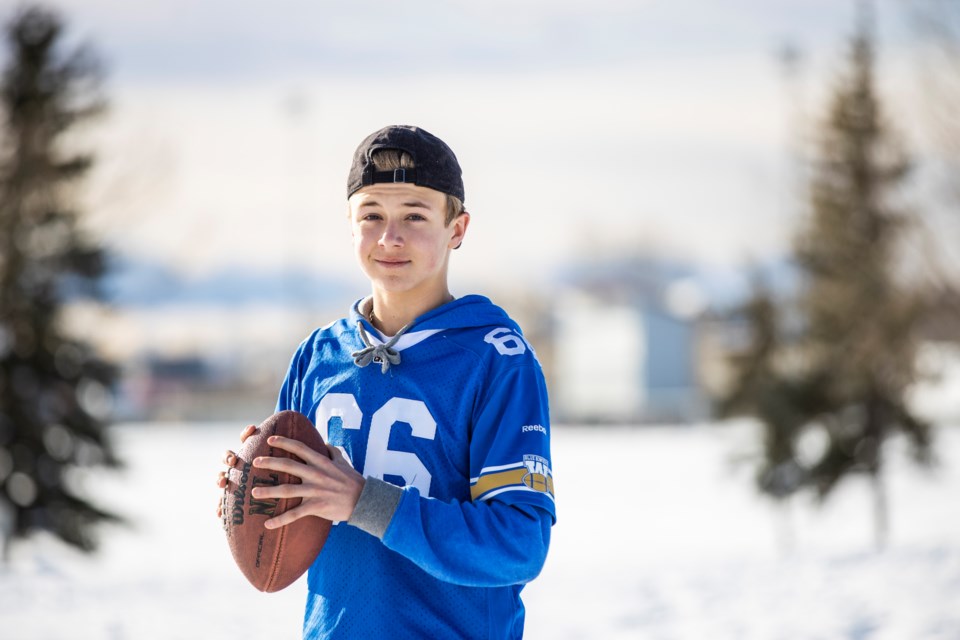 Thomas Rodehutskors, here just before going to watch the 2019 Grey Cup, is one of several Holy Trinity Academy Knights who played in the Football Alberta’s Summer Series weekend in Red Deer on July 17-18.

A moving target to work towards finally aligned for Okotoks football talent over the weekend.

Six members of the Holy Trinity Academy Knights made the grade through tryouts for Team South U17 to compete in the Football Alberta’s Summer Series weekend in Red Deer.

“It was this constant motivator that wasn’t going away because it wasn’t happening, but it was good and the reason I kept wanting to get on the field. I wanted to make that team.”

The Summer Series features top players from the southern and northern regions of the province squaring off at Red Deer’s Great Chief Park on July 18 at the U16, U17 and U18 levels after a series of practices over the two days prior.

In the absence of the U18 Canada Cup, U17 Pacific Challenge and Alberta Summer Games for the U16 group, the summer series was put together to offer a competitive setting for the province’s top athletes.

“Some of the boys that made the team, we’ve just been grinding through the whole COVID period so it’s awesome to get back on the field,” said defensive back Tyson Sopp, heading into Grade 11 at HTA. “It was really sweet seeing how good everybody was, there’s a bunch of the talent in Alberta (at camp).

“I think I just played my game and played to the top of my ability.”

Rosters for Team South were determined after a regional camp was held earlier this month in Airdrie. Over 800 players across the province tried out for the series.

“It was definitely unique, especially with it being the first major football operation that we’ve had since COVID,” said HTA and Team South wide receiver Thomas Rodehutskors. “It was really competitive and you could just tell that everyone was there for a purpose and that was to make the team.

“The coaches were there to push you and see what you had and they weren’t going to babysit you or anything like that. It was just a competitive environment.”

The evaluation camp saw position specific sessions for the players, one-on-one drills followed by full team installs running plays with the offensive lines and culminated in a full-fledged scrimmage.

“It’s definitely exciting to come back on the field for the first time in over a year and a half and it just means a lot to come back to the sport that I love,” said fleet-footed wide receiver Michael Eagle Bear, an HTA transfer from Foothills Composite. “(The camp) was really nice to see everybody around you, to see some old friends and also see the competition and see how everyone has grown over that long break we had over (COVID).

“It was just good to get out there and compete.”

For Okotoks’ Lukas Smith, the evaluation camp required adapting to a changing role as an offensive lineman.

“It was a big change of pace for me because between last football season and this camp in Airdrie I lost like 35 pounds and was playing a position at offensive line where you’ve got to be big,” Lukas said. “There were kids there that were 320 pounds so that was a bit of an adjustment.

“Before I was going more for losing weight and now I’m trying to gain that weight back so I’ve been eating a lot more and working out to gain weight and not really lose it.”

The Grade 11 student said strapping on the pads again for a competitive season with the Knights will be almost two years in the making since finishing up his Bantam football with the Eagles.

“That’s the stuff that I really like and didn’t get that last year.”

Getting further acquainted his new HTA teammates is one of the added bonuses of the experience for quarterback Ryan Petersen, a transfer from Bishop O’Byrne.

“It was a great opportunity to go to HTA, the coaches there they showed a lot of love and they’re such a family there, the players welcomed me with open arms and the academics are such a great mark there,” Petersen said. “It was just a great opportunity for me and my family and we thought it was the best decision for me at the time and it still is.”

Petersen, who described his style behind centre as a Tom Brady-Russell Wilson hybrid with a combination of leadership and improvisation, said the prolonged offseason gave him a chance to get acclimatized to high school football.

The prospect is on the horizon with HTA kicking off its pre-season camp on Aug. 16.

“It gave me a huge chance because there’s a huge step between Bantam and high school and it gave me a chance to really improve my quickness and how strong I am,” said Petersen, heading into Grade 11.

“It’s great, especially with (HTA offensive co-ordinator) Bill McConkey, he’s such a mastermind with his offensive schemes and it’s going to be a great season because I have so much faith in my coaches and my teammates.”

The Foothills Falcons were represented on Team Alberta U18.

Peacock, the Falcons special teams player of the year in his Grade 10 season, is no stranger to provincial competition having won bronze with Zone 2 at the Alberta Summer Games in 2018.

For more information go to footballalberta.ab.ca.