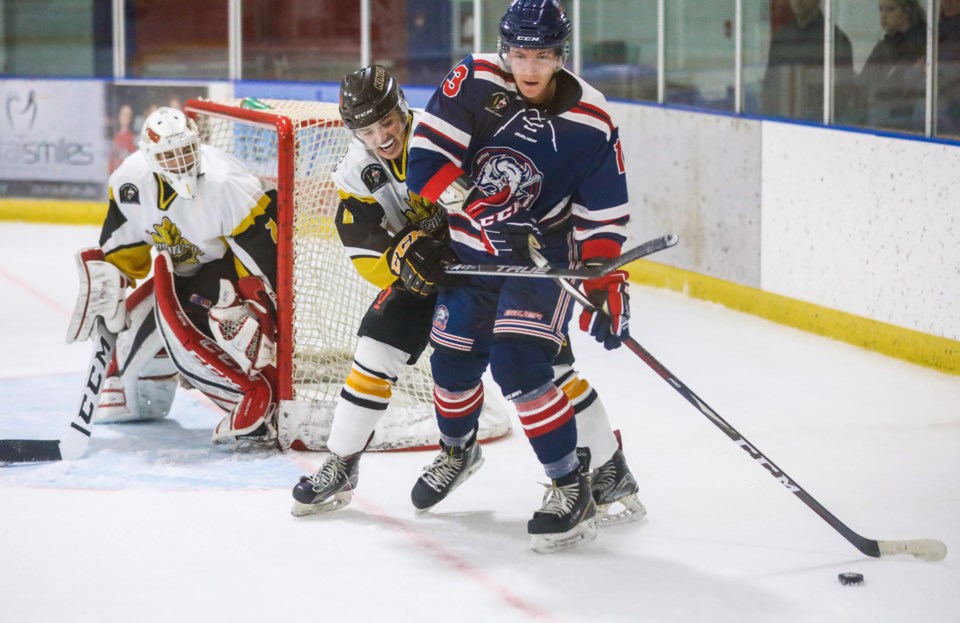 The Okotoks Jr. B Bisons kicked off the exhibition schedule with a pair of wins over the Strathmore Wheatland Kings on Oct. 9-10. The series continues this weekend. (Brent Calver/Western Wheel)

The Okotoks Bisons aren’t wasting any time getting back to their winning ways.

On the heels of their record-setting regular season in 2019-20, the Heritage Junior Hockey League prohibitive contenders Bisons took their opening two exhibition games with the Strathmore Wheatland Kings by a combined margin of 10-4 on Thanksgiving weekend.

“Overall, we’re at a starting point,” said Bisons head coach Chris Beston. “Was there lots of room for improvement? Yeah. I thought the boys competed, especially on Saturday when we had a younger crew.

“We’ve got stuff to work on and we knocked a bit of the rust off and I thought we got better each period as the game went on, so it’s starting to come around.”

In the opener on Oct. 9, the first of four straight against Strathmore, the Bisons rode a four-goal second period to a 6-2 triumph at the Murray Arena.

“We didn’t know what the season was going to look like or if we were even going to have any games this year,” the coach added. “To get back on the ice and play another team, I think the boys were happy to do that.”

Okotoks dressed a more rookie and prospect laden lineup on Oct. 10 in Strathmore and took the result by a 4-2 count.

“We have four games and, because we’re allowed 25 in our cohort now, everybody can play, every player is going to dress (on the weekend) and we’ll do the same next weekend,” Beston said. “We just kind of rotated and the guys that sat out in Okotoks this past weekend will play in Okotoks this weekend.”

On the big ice at the Strathmore Family Centre, Beston said it was a pretty solid effort top-to-bottom with Okotokian and Bow Mark Oilers grad Kyle Newnham impressing in particular.

“I was impressed with all the young kids,” the coach said.

Defence is a position to watch for the Bisons with spots to be had on the back-end.

“Our defence is going to be young, we’re a younger team obviously this year,” Beston said. “The few vets that we have back there are going to have to lead and show the ropes to these young kids.”

Okotoks blueliner Owen George, a standout on the AA Oilers for the past two seasons, has shown promise to the coaching staff.

“George is a talented hockey player,” Beston said. “Once he gets settled in and starts getting more and more comfortable we expect big things.

“He’s offensively talented, good skater. We kind of envision him being on our powerplay and quarterbacking it.”

The exhibition series continues this weekend with the Bisons playing host on Oct. 16 at 8 p.m. at the Murray Arena and the series shifting to Strathmore the following night.