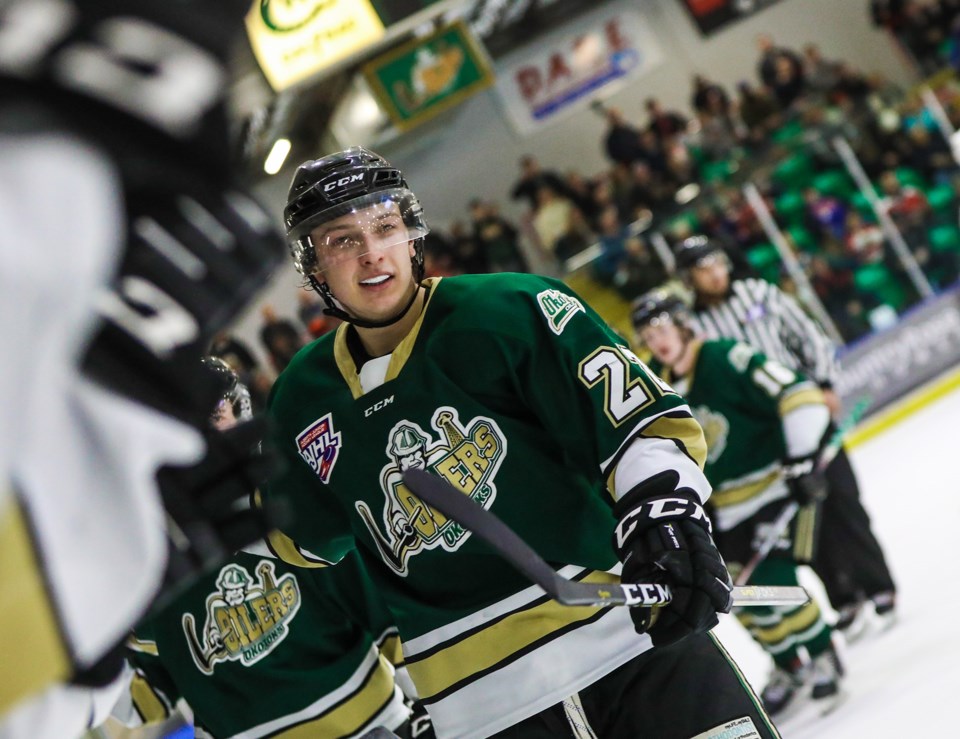 Okotoks Oilers forward Blake Jacques celebrates his goal on the Brooks Bandits at Pason Centennial Arena in Jan. 2020. The Jackpots for Junior Hockey online 50-50 campaign has been launched to benefit both AJHL and WHL teams in the province. (Brent Calver/Western Wheel)

Junior hockey fans have a new way to support their teams away from the rink.

The Jackpots for Junior Hockey presented by RE/MAX was launched at a Feb. 22 press conference showcasing the unique 50-50 initiative combining the Alberta Junior Hockey League’s 16 teams and Western Hockey League’s five Alberta-based squads as a means to offset the lost revenues during the COVID-19 pandemic.

“Last year we were two days away from starting in the playoffs and that is the time of the year where the crowds are good, the income is good and it’s huge in how we start off next year,” said Wayne Lauinger, Okotoks Jr. A Oilers chairman of the board. “In this case, we didn’t have that (in 2020), we survived, but we’re now focused on getting regular season started again in September and making everything work.

“This (initiative) will really help us get that kick-start to go.”

Losing out on ticket revenue for last year’s playoffs as well as most of the 2020-21 season which has largely been on pause created a bit of a double-whammy financially for the Oilers, Lauinger added.

“We’re sitting with just two employees, we laid others off,” he said. “Normally how our season works, we go through the season, we keep our bills together, but it's that playoff amount and being able to participate and as long as we’re able to make it deep in the playoffs really makes this season and kick-starts us into the next season.

“We didn’t have that this year on both ends. We are okay, we’re going to make it through, but we do need to build and have a good year this year in every regard, both on and off the ice.”

The new initiative was made possible through the Alberta Gaming, Liquor and Cannabis (AGLC)’s support of the lottery which allows for both leagues to take part in the virtual 50-50 draws.

New draws will launch each weekend in March and will be available for purchase online from anywhere in the province.

“Protecting the lives and livelihoods of Albertans includes ensuring that junior hockey remains a social and economic driver in our province,” said Leela Sharon Aheer, Alberta’s minister of culture, multiculturalism and status of women at the Feb. 22 press conference. “Thanks to changes made to provincial policy, the WHL and AJHL can now raise funds online to support their operations directly from fans in their communities.

“We’re asking Albertans to provide a much needed assist and purchase Jackpots For Junior Hockey 50-50 tickets.”

Noting the stark difference the pandemic has made on sports in the province, Aheer recognized how important it is to get the athletes back to activity, adding vital is an understatement when considering the mental health and well-being of communities in sports, culture and arts.

“Sports at all levels have been impacted, practices and games and workouts have all been curtailed or cancelled and this is certainly very, very true for junior hockey in this province,” she said. “Last year’s season was cut short, this year’s season has been really significantly affected and those disruptions have had negative effects on the leagues, our teams and the province.

“And it’s had an impact on communities that share over 100 million dollars that junior hockey actually injects into our local economies. It affects the young players whose sporting careers are impacted, potentially limiting opportunities for them to advance to international or professional playing opportunities.”

As per a press release from the Province, the WHL and AJHL combine to contribute over $100 million into the Alberta economy. Moreover, the WHL and AJHL typically average over one million fans per year in the province and the WHL employs over 1,000 full-time and part-time workers.

Both leagues have been granted a return to play with the WHL’s Alberta teams set to begin its 2020-21 season on Feb. 26.

The AJHL is expected to begin its season in March after a brief training camp with games to continue on weekends until the end of May.

“Without financial support, communities are at risk of losing their teams,” said AJHL commissioner Ryan Bartoshyk at the Feb. 22 press conference. “Ensuring that these teams remain viable is not only a vital stimulus for the Alberta economy, but it also helps our communities cope from a physical and mental well-being standpoint.”

Lauinger said he’s optimistic the initiative will be a success, noting that strong marketing will be needed from all 21 teams benefiting from the Jackpot.

“We have to market it correctly, but we’ve got a lot of good professional marketers that will make this work out there,” he said. “If we can build this through every weekend in March…You’ve got 21 teams all pushing their fans, pushing their advertisers, pushing their communities.”

Tickets will be available for purchase at ajhl.ca and whl.ca with the first draw opening on March 5.

Bisons focusing on next season after bittersweet cancellation
Feb 18, 2021 10:30 AM