Inaugural Kurl for Kids Funspiel to sweep into Okotoks 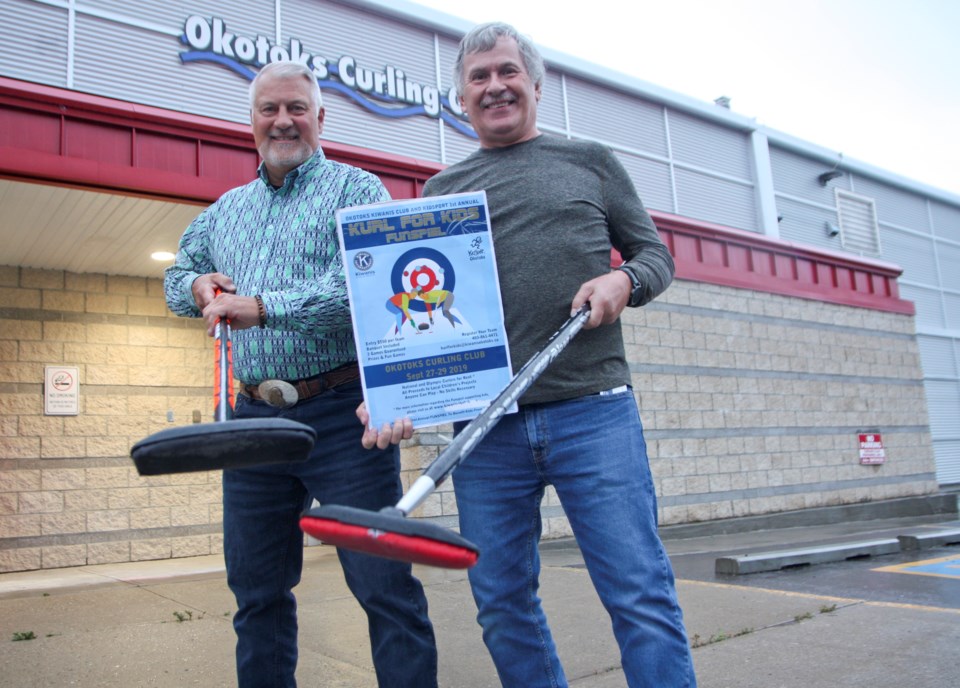 From left, Don Moss and Mark Anderson of the Okotoks Kiwanis Club. The Kiwanis club is putting on the Kurl for Kids Funspiel in partnership with KidSport Okotoks from March 27-29 at the Okotoks Curling Club. (Remy Greer/Western Wheel)

Curling enthusiasts will want a mulligan if they miss out on this one-of-a-kind fundraiser.

Okotoks Kiwanis Club and KidSport Okotoks are partnering for the first annual Kurl for Kids Funspiel supporting kids from March 27-29 at the Okotoks Curling Club where some of the roaring game’s brightest stars will be available for hire.

“The mulligans are similar to what you would find in golf,” said Dennis Dahl, Okotoks Kiwanis Club secretary. “One might be if your opposing team makes a great shot you could pull out one of these mulligans that forces them to throw the rock again. Another one might be that you could physically take your rock and put it anywhere you want in the house.”

The biggest mulligans, or curling curveballs in this case, will be those used in swapping in a temporary team member, one with perhaps Olympic or Scotties Tournament of Hearts hardware.

“The Olympic and national curlers are going to be there for hire,” Dahl said. “If one of your skips has a tough shot you’ve got for a few bucks, for a donation, you can get the reigning Canadian champion to throw your rock for you.

“That is very unique, you’re not going to go too many places and be able to have that.”

Curlers for hire at the funspiel will include the 2019 Scotties champion Chelsea Carey. Carolyn Darbyshire-McRorie, the 2010 Olympic silver medallist as the second on the Cheryl Bernard rink, is also confirmed. Organizers hope to have approximately 10 professional curlers lending their shot making capabilities to the funspiel.

It will also give curlers antsy to get back on the ice a head start as the Okotoks Curling Club will be opening one week earlier than normal, specifically for the funspiel.

“It’s getting a group together to come on out have a lot of fun on the weekend and get an opportunity to rub elbows with some Olympic or national curlers and help raise some money for kids in town,” Dahl added. “For curlers in the Okotoks and Foothills area, this is a must-event they should really come out and help support.”

There’s a strong curling link to the Okotoks Kiwanis Club.

Shannon Kleibrink, the 2006 Olympic bronze medallist, is a member of the club.

“She’s participated in these kind of things in a couple different places,” said Mark Anderson, Okotoks Kiwanis Club past-president. “And so it was ‘okay why don’t we try something different out here that’s never been done in this area?’ We thought we would give it a shot.

“With the way the economy has been the last few years, trying to come up with something a little more unique was the plan and that’s how it all started.”

The plan is to make the funspiel an annual event as word of mouth and notoriety should pick up once the event has been showcased for the first time.

Okotoks Kiwanis, which received its charter in Dec. 2017, is part of the international Kiwanis network with a mandate to make the lives of children in the community better tomorrow than they were today.

Some of the club’s big initiatives include the annual holiday toy drive with Walmart.

Kiwanis makes a point of partnering up with other community groups, such as KidSport in this case, when the opportunities arise.

“One of the things we’re doing differently as a club out here is we’re getting partnerships,” Anderson said. “With KidSport for example, if they’re running something and need more bodies we’re willing to help them out or if some of our money can go there or to the other service clubs.

“Everybody is down in numbers, numbers aren’t really high so we’re trying to do partnerships with different ones.”

Entries for the funspiel are $550 per team. That includes the Saturday evening banquet, three games guaranteed on the ice as well as prizes and fun games.

For more information on the Funspiel supporting kids go to kiwanisokotoks.ca

Editor's Note: The Kurl for Kids event was originally scheduled for Sept. 27-29 before being postponed to late March.