It was a marked improvement but turnovers continued to dog the Foothills Falcons and it proved costly in the final of their home tournament on Saturday.
Jan 12, 2011 12:00 AM By: Bruce Campbell 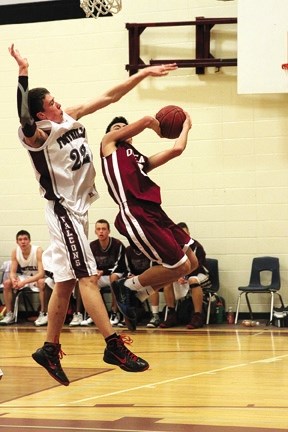 It was a marked improvement but turnovers continued to dog the Foothills Falcons and it proved costly in the final of their home tournament on Saturday.

Turnovers and missed shots were the difference in the Falcons’ 85-76 loss to the Bishop O’Leary Spartans in the final of the Falcons Classic Senior boys’ basketball tournament at Foothills Composite High School.

“We just couldn’t shoot the ball well,” said Falcons coach Amron Gwilliam. “We were 0 for 12 on our three-point shots. The Spartans made about 10 of them, so that’s about a 30-point differential. We usually have a couple of guys who hit the three.”

The Falcons fell behind 8-0 in the opening two minutes of the game, but were able to chip away at the lead and took a 39-38 lead when Foothills’ Anand Carrigan put in a lay-up with 2:05 left in the first half. The Falcons would lead 41-40 at the half-time break.

The lead exchanged hands several times in the second half, but the Spartans took control when they hit a pair of three-point shots midway through the fourth quarter to take a 78-70 lead.

The Spartans’ Aesop Francisco, the smallest guy on the court at five-foot-four, put the Spartans up by six when he hit a three-pointer from the corner.

“The shot clock was winding down and I got the ball and took the shot,” Francisco said.

The Falcons were able to cut the lead to 78-74 on a Carrigan lay-up, however, that would be as close as they would get as the Spartans went on to the 85-76 victory.

While the Spartans were lighting up the scoreboard from beyond the arc, the Falcons’ put up a goose egg.

However, the biggest issue was falling behind in the opening minutes.

“Our lack of intensity in the first five minutes was the biggest thing,” Gwilliam said. “We were able to get back in the game, but we weren’t able to fully recover.”

He said the Falcons have been working on playing against a man-to-man defence and the Spartans’ zone D took them by surprise.

“They have a good zone defence,” Gwilliam said. “We weren’t quite ready for it… Our focus will be working on playing against a zone this week.”

Spartans coach Ray Filice said their defence was the key to the victory.

“We don’t have any six-foot-six players on our team, so we have to rely on our quick defence and a solid five-man defence,” said Filice. “When things are rolling, we can create a lot of points from our defence.”

The Falcons’ Ray Goff led the team in scoring with 24 points in the final and he also had 17 rebounds and six blocks.

“We were able to improve on our turnovers,” Goff said. “Our intensity wasn’t where we wanted it to be, but it will be by the end of the season.”

Gwilliam said he would have preferred to win his home tournament, but he was pleased with his team’s effort.

The Falcons advanced to the final by beating the Bowness Trojans 79-65 Friday night in the semi-final.

“Bowness is very physical and we hadn’t played for a while,” Gwilliam said. “I think we are finally able to get everybody to buy into our new offence. We played well together, we look really good. When we do that, we can compete with any team in the province.”

The Falcons proved that by trouncing the Chestermere Lakers 84-43 in the tournament opener. The Lakers had downed the Falcons by two points early in the season before Foothills had established its offence.

“We probably had our best game of the year,” Gwilliam said of the victory over Chestermere. “It was kind of a revenge game for us. The guys were really glad to have a second chance at them.”

Gwilliam said the Falcons were able to reduce their turnovers in the first two games of the tournament which was key.

“It was still higher than I would like — a coach would like to have no turnovers,” Gwilliam said with a smile. “But it is getting better.”

“I wasn’t happy with the final, but overall, I was for the tournament,” Derochie said. “From our last games (in late December) to this tournament, we have improved so much. We wouldn’t have been able to compete with these teams a week ago.”

The Falcons’ next game is Friday when Foothills hosts the Holy Trinity Academy Knights at Foothills Composite High School at 7 p.m.