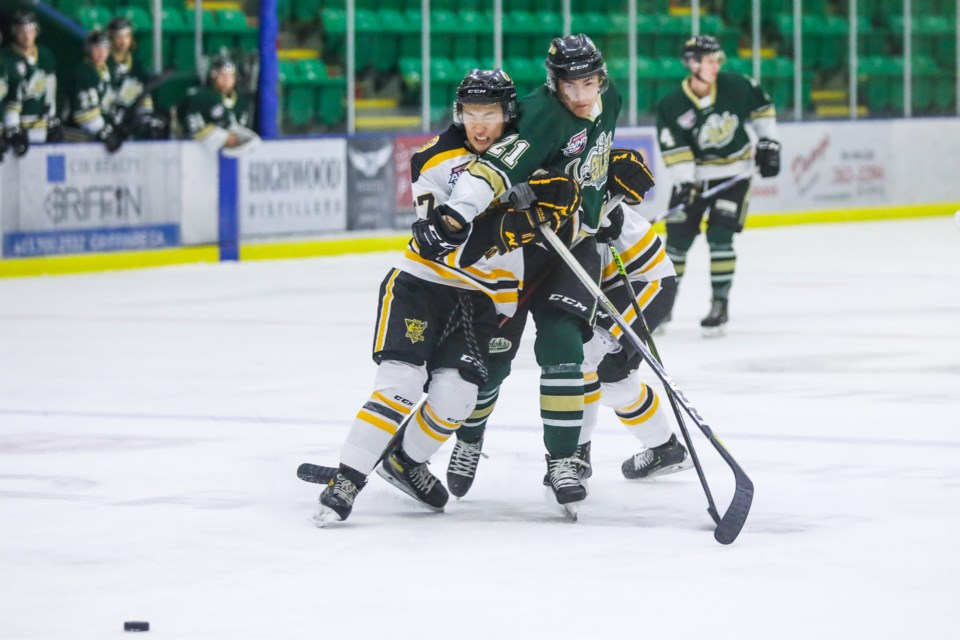 It’s been a long wait for the opening face-off of the AJHL regular season.

And for the first-year members of the veteran-laden Okotoks Jr. A Oilers the anticipation will finally come to a crescendo this weekend with a pair of road dates as the Alberta Junior Hockey League 2020-21 campaign opens on Nov. 13. The AJHL does not fall under Alberta's new targeted measures which include a ban on indoor group sports actitivies from Nov. 13-27.

“You’ve kind of got to take it one day at a time, you don’t know what any day brings, you’ve just got to make the most of it,” said Oilers rookie forward Rieger Lorenz. “I think it will be pretty similar (to exhibition) everyone is really excited to get the season going and the same amount of enthusiasm will be brought to each game.”

A University of Denver commit, Lorenz was a prolific point producer with the Edge Academy with 37 goals last season while being named top freshman in the CSSHL U18 ranks.

“I think it’s just one step up from (U18), teams are faster, players are a bit bigger,” he said. “So I’ve got to keep it simple and have to kind of have that simple game and build off that.”

The Calgarian brings a speed and power game to the lineup despite his youth. The 16-year-old tips the scales at 6-foot-2, 185 pounds and has skated on a line with veterans Brandon Machado and Carson Dyck in the early going.

The talented forward said he joined the Oilers due to his relationship with head coach/GM Tyler Deis and being introduced to the program over the past few seasons.

“Knowing Deis for quite a while, he’s watched me all throughout minor hockey, so I made that connection pretty early,” he said. “And they had me out to a few practices in the last couple of years and I just really fell in love with the program.”

A strong family connection to the Oilers bench boss helped set the table for another Oilers rookie to land in Okotoks.

"I used to come to the spring camps, my dad (Calvin) and Deis actually used to play junior hockey together and they were roommates in Melfort," said Okotoks rookie forward Nolan Flint, who calls Beaverlodge home. "That's why my dad wanted me to come to their spring camps because he knew Tyler was a great guy, great coach and knew what he was about.

"That's how it started."

Flint, a 6-foot-3, 190-pound forward, tallied 10 goals and 29 points with the Grande Prairie Storm in the AAA ranks last season.

The 18-year-old said the approach he's taking is to remain focused and ready to play when called upon.

"It's been good practising with the guys and getting to see everything and then with all the exhibition games," Flint said. "It's my first year and we've got a lot of returners and we have no APs so if there's injuries or anything, I'm just going to take that as my chance to show them what I can do and do everything I can to try and get in the lineup."

Though Okotoks is comprised primarily of veteran skaters this season, there are a number of first-year Oilers on the team eager to make an impact.

"It's been awesome, the guys have been great and accepted us (rookies) right away," Flint said. "And made us feel like home even though everyone has known each other for a long-time and it's just five of us coming in. Us rookies are pretty tight and it's good throughout the room, too, everyone is getting along well."

To kick-off the season the Oilers are in Calgary to face the Canucks on Nov. 13 and travel north to clash with the Olds Grizzlys on Nov. 14. Okotoks is again in Calgary for a Nov. 16 tilt and return to Pason Centennial Arena for its home opener on Nov. 22, a 4:15 p.m. start versus the rival Camrose Kodiaks.

Due to facility restrictions amid the COVID-19 pandemic, the Oilers are not able to offer general admission or season ticket sales at this time.

One way to support the team is through its online 50-50 campaign at rafflebox.ca/raffle/oilersajhl.