The Holy Trinity Academy Knights Senior boys basketball team has been perfect in league play thus far and they are hoping to carry that momentum into their home tournament.
Jan 5, 2011 12:00 AM By: Okotoks Western Wheel Staff 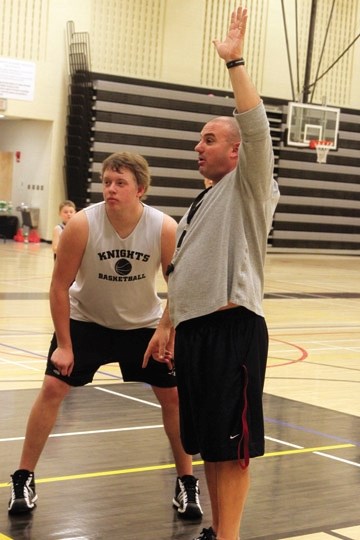 Holy Trinity Academy coach Sam Aiello instructs a drill with post Alex Lorenz during a December practice. HTA will play host to the annual Knights Classic Tournament on Jan. 7-8 featuring competition from across the province.

The Holy Trinity Academy Knights Senior boys basketball team has been perfect in league play thus far and they are hoping to carry that momentum into their home tournament.

Holy Trinity Academy (HTA) will host the annual Knights Classic Senior Boys Basketball Tournament on Jan. 7-8. The field will feature competition from across Alberta, including those that boast a much larger student body than HTA.

Headlining the competition, along with the host Knights, will be the defending champion St. Joe’s out of Edmonton. Holy Trinity head coach Sam Aiello said the Edmonton school is expected to bring another strong entry and contend for the title.

Calgary’s Winston Churchill High School will also be represented at the tournament, as will Airdrie’s George McDougall High which, like HTA, is ranked as a honourable mention in Alberta Provincial 3A rankings.

Rounding out the list of entrants is Highwood High School out of High River, West Central, Kate Andrews from Coaldale and Eagle Butte, all of who will be seeking to spoil HTA’s party.

Holy Trinity’s first game will be on Friday night against Eagle Butte at 6 p.m. The winner of that match will face the West Central-Kate Andrews victor in a Saturday clash at noon. The loser will head to the consolation round.

For Aiello, the goal is to avoid an early exit and try to make some noise in the Knights Classic’s later stages. Aiello said he believes his team is equipped to do just that.

“I think if our team is prepared and focused to play, that we have a shot at doing well in this tourney,” he said.

The championship final will take place on Saturday night at 7 p.m. at Holy Trinity Academy.

Holy Trinity will also be in action during the week, taking on the Oilfields Drillers in Foothills Athletic Council (FAC) play on Jan. 5. The girls’ game will be at Oilfields High School at 5:30 p.m. The boys will follow with their game at 7:15 p.m.