“I love Okotoks, I love the people here, for me to be playing in front of them would just mean the world to me because I just want to be able to give them the satisfaction of another championship after these tough few years.”
Jun 10, 2021 2:00 PM By: Remy Greer 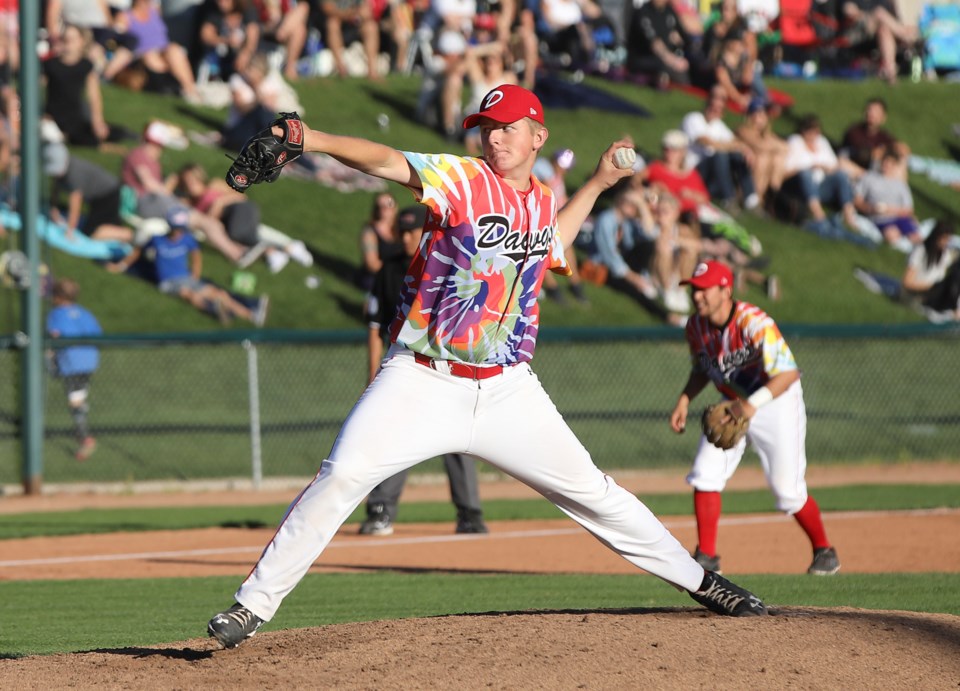 Okotoks Dawgs southpaw Graham Brunner is back for a fourth season with the college Dawgs, pitching for Dawgs Red in the 2021 WCBL season. (Brent Calver/Western Wheel File Photo)

The boys of summer won't be taking it easy on their hometown peers this summer - quite the opposite.

With the Okotoks Dawgs fielding two teams in the Western Canadian Baseball League based largely of academy players supplemented by graduates now plying their trade in collegiate baseball it's an opportunity to showcase the considerable talent and chemistry that's been harnessed throughout the years at one the most vaunted programs in the country.

“It kind of goes back longer than since the announcement that we would be in the WCBL,” said 18U Dawgs Black outfielder Alejandro Cazorla.

“Last year we didn’t really get a full season and I felt like we had a really strong squad and unfortunately with everything that’s happened with COVID over the past two years we had some guys stay back, due to schooling situations, so a lot of the guys I grew up with through the academy are going through their last academy season here as well.

“As a team, we’ve been ready for over two years, we’re ready for this level of competition and I really believe we can take it home.”

The 2021 campaign in the WCBL will have five teams take to the field, the Dawgs Red and Dawgs Black along with the Edmonton Prospects, Lethbridge Bulls and the expansion Sylvan Lake Gulls. The teams will be fielding all-Canadian rosters due to the border closure amid the pandemic.

The Dawgs Academy was able to get games in last summer, but pandemic restrictions took away the opportunities for significant travel tournaments on both sides of the border.

This year feels like making up for lost time.

“We were signed up to go to some big, big tournaments last year and this year as well,” Cazorla added. “I remember in 2019, we won a really big Florida championship and in Indianapolis made it to the semifinal there.

“That year I felt we had a strong squad and it just seems to keep getting stronger and stronger and throughout the years we’ve been getting better and better, preparing for a higher level of excellence.”

If experience at the college level isn’t in the Dawgs teams' favour, chemistry certainly will be with athletes coming through the academy ranks and grinding at the task for years.

“Most of us have been here multiple years,” he said. “We’re comfortable with each other and really bring the best out of each other.”

The same can be said for the top two teams in the academy, 18U Dawgs Black and Dawgs Red who bring a healthy competition to the field.

“But when it comes to the field, it’s kill or be killed. It doesn’t matter if you grew up with your best friend on the other team. More often than not they come out with a chip on their shoulder, they want to come out and rip our hearts out, it’s never an easy win either way.”

Graham Brunner, a fixture on the mound for the past three collegiate Dawgs teams, knows the dynamic between the academy teams intimately.

“Growing up here for the two years in high school, you definitely get pretty heated with your buddies, playing against each other quite a bit with inter-squad,” Brunner said. “I think it will be good chemistry for everybody, both teams have stuff to prove to their coaches and teammates.

“It’s definitely different than the other three summers. I’m older and used to being around college guys and it’s kind of nice now being with the high schoolers who haven’t been into this, they ask questions about what it’s like. It will be different (for them) from parents at games in high school to a lot more fans hopefully this summer.”

That fan support, the incomparable Dawgs faithful, is a big draw for Brunner who has pitched to packed Seaman Stadium crowds for parts of three seasons.

“That’s why I wanted to come back here,” he said. “The crazy amount of fans in Okotoks, everyone that comes out and watches. It’s definitely the greatest atmosphere I’ve played in so far in my career and always look forward to it every summer.”

Brunner enters the summer on a high after a strong second season at Barton College.

The lefty earned First Team All-Conference honours after posting a 7-2 record with 65 strikeouts in 63.1 innings for the Cougars. After two years at the Kansas-based JUCO, Brunner is transferring to Illinois State University next season.

“I loved it (at Barton) for two years, great experience, loved the guys there, made a lot of great friends,” Brunner added.

A key member of the Dawgs rotation during the 2019 championship season, Brunner had to miss out on the end of the season Dawg pile when Okotoks clinched the title in August.

“After COVID last year I definitely want to be able to continue throwing and hopefully get in the weight room when restrictions open up,” he said. “And just get back on a regular schedule so I can prepare for my next step in my college career.”

The Dawgs Black is hosting its home opener on June 19, a 7:05 p.m. start versus the Edmonton Prospects while Dawgs Red kicks things off at Seaman Stadium on June 20, at 2:05 p.m., against the visiting Lethbridge Bulls.

Both Dawgs teams will play 20 home games at Seaman Stadium during the regular season.

“Undoubtedly, Okotoks fans are the best in the world, they come out with their passion every night, they love their town, they love their teams, not just Dawgs, but Okotoks Oilers in the winter,” Cazorla said.

“I love Okotoks, I love the people here, for me to be playing in front of them would just mean the world to me because I just want to be able to give them the satisfaction of another championship after these tough few years.”

For more information go to dawgsbaseball.ca.