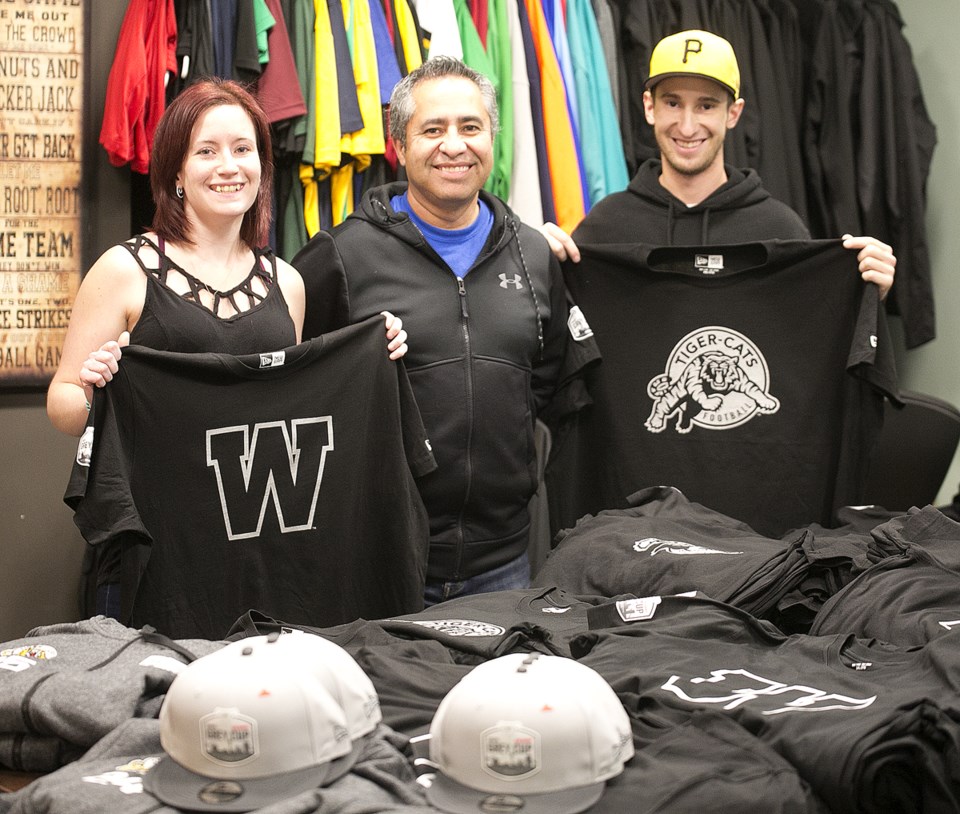 Grand Slam Sporting Goods’ Ashley Humble, Pablo Forno and Dallas Forno hold up some of the attire the Hamilton Tiger-Cats and the Winnipeg Blue Bombers will wear during Grey Cup week in Calgary. The Okotoks company received the contract from New Era Cap company to prepare the wear. (Bruce Campbell, Western Wheel)

When the final whistle blew in the Eastern final on Sunday, it was time for an Okotoks team to start working overtime in preparation for the 2019 Grey Cup — to ensure the Hamilton Tiger-Cats and Winnipeg Blue Bombers will be looking smart.

“As soon as the Ti-Cats won, we got the Hamilton stuff going right away,” said Pablo Forno, owner of Grand Slam Sporting Goods in Okotoks. “As soon as that last whistle went, we went to work.”

Grand Slam Sporting Goods in Okotoks was awarded with making the players’ merchandise they will be wearing leading up to the Grey Cup.

“Every piece is going to have the players’ number right on it — they will be wearing hats’ toques, zip-ups, t-shirts during the week,” Forno said. “Then once the game is over, we are going to be doing the championship hats for who ever wins the Cup.”

That’s right, when Ti-Cats’ Brandon Banks or the Bombers’ Zach Collaros is standing on the stage with the Grey Cup this Sunday at McMahon Stadium, it will be a hat put together by an Okotoks company.

“Every single player is going to be wearing our stuff — all the coaches, all the office staff, the medical staff,” Forno said. “We got a list of everybody and their sizes.”

When they say everybody, they mean everybody. Grand Slam also had the complete list of sizes for the Edmonton Eskimos and the Saskatchewan Roughriders — afterall they didn’t know the outcome going into the Sunday finals.

There are some hoodies and shirts that look like bedspreads. You have to carry some bulk to block for the likes of Winnipeg’s Andrew Harris.

There were five ‘3XXXL” shirt sizes on the Bombers’ roster and a couple as well from the Ti-Cats.

The contract is with New Era Cap company, the official outfitter of the CFL.

“They called us back in September about having somebody local do what we do, with the embroidery, silk-screening and heat pressing,” Forno said. “They were looking for a one-stop shop.”

Grand Slam had a trial run with the Canadian Premier League championship in November.

“We did all the championship hats, silk-screening and that kept us busy,” Forno said. “The Grey Cup was always the main thing we were working on.”

It bodes well for the Tiger-Cats. It was Forge FC — from Hamilton — which won the Premier League title, downing the Calvary FC who play out of ATCO Field at Spruce Meadows in the final.

Grand Slam Sports employee Ashley Humble found out there can be some heartache when making sportswear for the Grey Cup.

She was busy working on Hamilton Tiger-Cat merchandise while wearing a Roughriders jersey during the Western final — in hopes she would be pressing Saskatchewan clothing just a few hours later.

“It was busy,” said the Regina native. “We couldn’t stream it (the Saskatchewan-Winnipeg West final) in here, we just kind of kept track online… Not one touchdown.”

The crew worked around the clock. When the Bombers and the ‘Cats landed in the airport on Nov. 19, they were greeted with what is called Tarmac wear.

Forno had to have some of the gear up at the Calgary International Airport in the afternoon.

Meanwhile, the Bombers and the Ti-Cats still have to decide who will be wearing the championship cap.

The caps are prepared in advance.

So as soon as the game ends, the players from the winning team, will have a Grand Slam hat placed on his lid.

As for those losing teams, those championship hats are destroyed.

New Era’s Grey Cup merchandise made at Grand Slam will be available to the public at McMahon Stadium or on-line through the CFL.