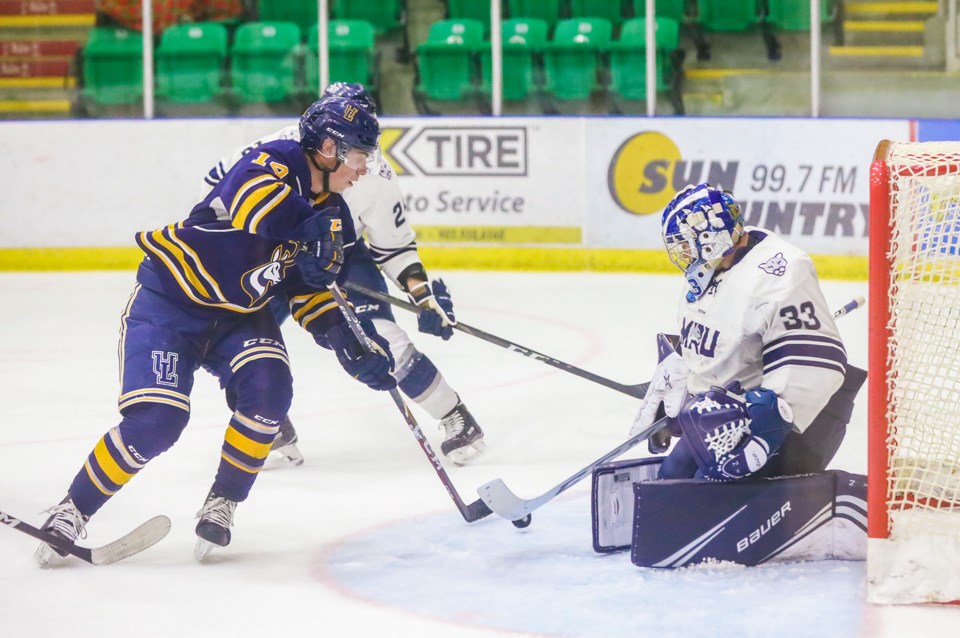 Oilers alumni Kyle Gordon (#14) and Riley Morris meet again at the crease playing for the U of L Pronghorns and the MRU Cougars during an exhibition game at Pason Centennial Arena in September. Gordon is now part of the York University Lions team after the Pronghorns discontinued the hockey program. (BRENT CALVER/Western Wheel)

A former member of the Green and Gold is back on firm ground following a week of upheaval and uncertainty.

Okotoks Oilers alumnus Kyle Gordon relied on some networking and a little help from his friends in Big Rock Country to find a hockey home with the York University Lions after the University of Lethbridge announced last week it was discontinuing its Pronghorns men’s and women’s hockey teams.

“When this happened I knew my Pronghorns coaches would be a bit busy so I actually reached out to the Okotoks Oilers coaches – Tyler Deis and Kyle Schussler and they actually started naming me around to schools,” Gordon said. “Deis was calling more people in Alberta and I told Kyle I would be interested in going out to Ontario so he got in touch with some Ontario schools.

“It’s actually a big credit to Ben Evanish, who was my linemate in Okotoks, he plays for York and I texted him and said ‘hey man, any chance there’s room for me there? Can you give the coach my number?’ That’s how I got the phone call and that’s how it started.”

Gordon had 45 goals and 126 points in 147 games with the Oilers from 2016-19, wearing a letter his last two seasons in Big Rock Country and earning the captaincy in his junior swan song.

Off the ice, Gordon was twice recognized with the Greg Wedderburn Oiler Award by the team for his dedication to the team, the sport and the community at large. The winger picked up the AJHL’s Most Dedicated Player award in the 2018-19 season.

In his rookie campaign at the U Sports level, the Cochranite registered 3 goals and 7 points in 25 games.

“I really enjoyed the school, the coaching staff and the players and the rink and everything about it,” he said. “And I was looking forward to having three of four more years there.

“We had 12 first-year players and I felt like in a couple years we were going to be a bit older and a bit better.”

On April 20, the University of Lethbridge announced it was discontinuing its men’s and women’s hockey teams due to budget constraints, citing three straight years of reductions to its operating grant.

“The Pronghorn hockey programs have been a source of great pride for our athletes, students, alumni, donors, sponsors, the campus community and supporters throughout southern Alberta,” said U of L president and vice-chancellor Mike Mahon in a release.

“I know this news will significantly impact everyone associated with these programs.”

The shutdown of the hockey teams affected 52 student athletes. The Pronghorns men’s team was established in 1984 while the women’s team debuted in 1997.

“You’ve got to live with it, but there was a lot of frustration with how they handled it,” Gordon said. “Luckily it worked out for me, but I know some other guys are still looking and a lot of teams are full. Obviously, the girls and guys hockey teams are close and a lot of us talk and for them, the girls schools fill up a lot quicker than the guys.

“The girls are struggling, too, it’s not just the men’s hockey.”

Gordon said the news was far from expected, as the team learned in an email and subsequent video-conference the same day the news went public.

“It was a very big surprise, we just finished exams, I was just chilling at home, woke-up and was having breakfast with my family and then my phone starts blowing up,” Gordon said. “All the boys were like ‘hey, look at the email we all just got in our group chat.’

“They held a Zoom with all the athletes and they basically read the email to us and answered some of the questions we had and that was about it.”

Gordon said school officials could only do so much to help the student-athletes find a new place to study and play hockey, noting connections with coaches across the country don’t happen overnight.

“A lot of those people don’t have a hand in hockey and when it comes down to it, there’s not much they could have done,” he said. “That’s one thing a couple of us mentioned to them, do you know coaches on other teams? Do you have personal relationships with them?

Fortunately for the 1998 born forward, he was far from a stranger to the York brass who had previously attempted to recruit Gordon during his final season with the Oilers.

“I got a lot of help from some former teammates and former coaches,” Gordon said. “Everyone was jumping at the opportunity to help because they didn’t want to see so many hockey careers end, at least not right away.”

A business accounting student, who plans to earn his CPA designation, he expects most, but not all of his 12 credits from Lethbridge to transfer to the Toronto school.

“I might lose one or two,” he said. “But at the end of the day that’s not a huge deal for me, because I still have four years of eligibility left to play hockey.”