Okotoks: Alex Jensen, a pitcher with the three-time champions, behind mic in Oakland
Jun 4, 2021 2:00 PM By: Bruce Campbell 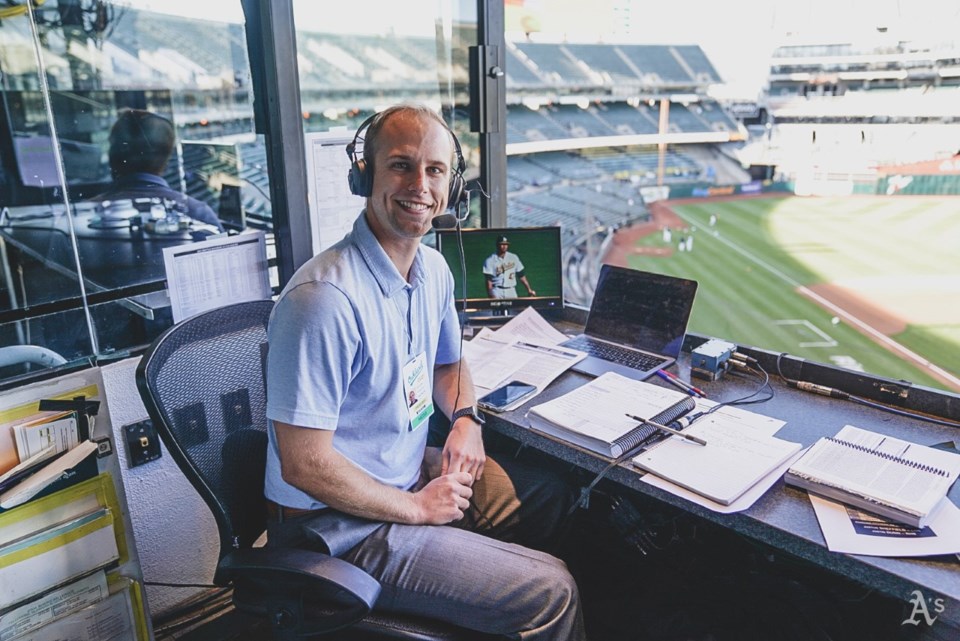 Former Okotoks Dawg Alex Jensen made his major league baseball radio broadcast debut when he brought the action of the Oakland A's-Seattle Mariners game on May 24. (Photo submitted)

A former Okotoks Dawgs pitcher, who made his baseball announcing debut at Seaman Stadium, came in relief for a radio broadcast for the major league team he grew up idolizing.

Alex Jensen, a pitcher with the three-time WCBL champion Okotoks Dawgs from 2007-2009, was in the broadcast booth for the Oakland A’s in their 4-2 loss to the Seattle Mariners on May 24 in Oakland.

“Ken Korach took the day off – he’s a legend, I grew up listening to him,” the-34-year-old Jensen said on May 25 from southern California. “It’s surreal. I had worked with the A’s in 2018 and 2019 as a broadcast assistant and a back-up show host. I kept getting more opportunities and it turned into what happened last night.

“It was a dream come true… I would go to the coliseum and look up to the broadcast booth and think: ‘What if?’

“I can’t even explain how special this was.”

Jensen is the present play-by-play announcer for the Stockton Ports, a minor league affiliate of the A’s in southern California.

He shared the booth on May 24 in Oakland with former A’s catcher Ray Fosse, who did colour commentary. Ironic, because his first broadcast was with a famed catcher in these parts.

“When we (the Dawgs) hosted Team USA and China Taipei in a super series, I asked Dawgs executive director John Ircandia if I could (web) broadcast Team Canada against Taipei,” Jensen said. “That was my first baseball play-by-play game and Brett Thomas did colour.

“We were roommates with the Dawgs and he is one of my best friends, now we both live in the Bay Area.”

Thomas, an all-star catcher with those early championship Dawgs, was on the phone to Jensen offering congratulations prior to the former pitcher making his major league baseball announcing debut.

(Jensen pitched against Team USA in that series at Seaman Stadium, the Americans helped Jensen choose broadcasting. "I gave up the longest home run of my career,” he said.)

However, the Oakland Coliseum is a long way from the friendly confines of Seaman Stadium. But baseball is baseball, whether it is Dawgs, Little League or the first-place Oakland A’s – preparation is the key.

“I got there around 2 p.m. for a 6:40 first pitch game. I had to record some things for the pre-game show,” Jensen said of his major league debut. “I try to keep up with the A’s as much as I can, but we (the Ports) normally play at the same time. The advent of Zoom and all those press conference archived has helped me keep up with the team.

“I was able to watch some of those every day for about two weeks, know what was going on and some of the subplots.

“One thing I want to know – obviously I have the players’ numbers in front of me – but I want to know who is hot, who is not, what the guys did in the last series…

“There is just so much downtime in baseball between pitches and you want to add some life to the broadcast… Anything that I can get in game notes, I take a highlighter to those, who’s been hitting well, that’s the kind of info I want to know going into a game to share with the fans.”

Jensen’s first home run call for the A’s was a solo blast by Mark Canha.

Jensen is a graduate of St. Mary’s College in California, where he played baseball and presently announces basketball games for his alma mater the Gaels – a Div. 1 school playing in the same basketball conference as Gonzaga and BYU.

Jensen is a die-hard A’s fan, growing up with the Bash Brothers (Mark McGwire, Jose Canseco) and later the 2001 to 2003 A’s, who couldn’t win a playoff series. His favourite player was hall-of-famer Ricky Henderson.

Jensen had a whack of e-mails and texts after his A's debut from another group of players which won a few championships – some members of the 2007 to 2009 championship Dawgs.

“(Dr.) Manny Kumar sent me a message wishing me congratulations,” Jensen said. “Jeff Duda sent me a text, that was nice, John Ircandia told me he was proud of me and that meant a lot… I will never forget my time in Okotoks.”

Jensen is scheduled to broadcast his next A’s game on June 14.