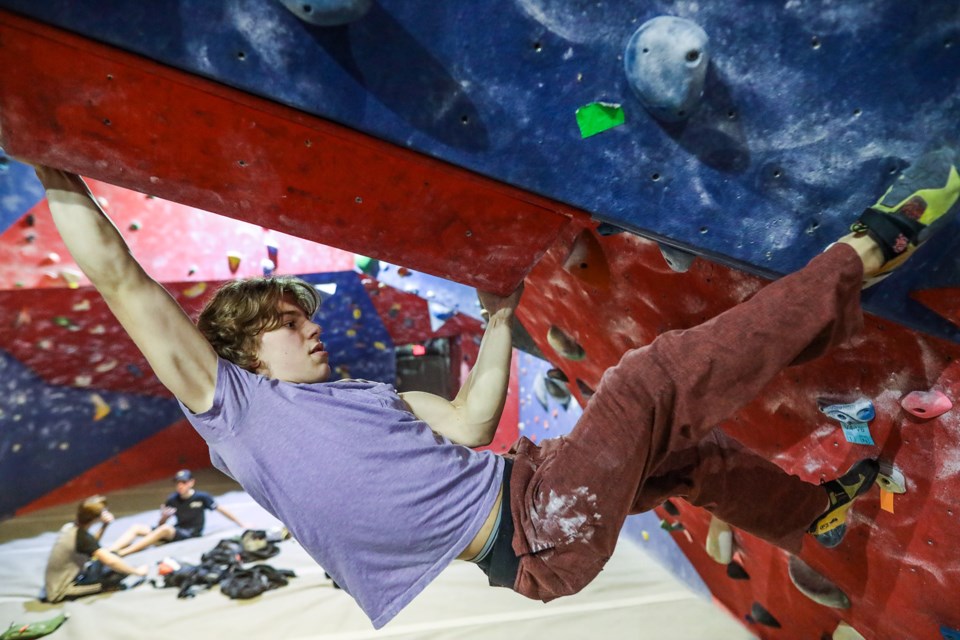 The first one is for experience and the second is to make some noise.

High River’s Cameron Farr-Jones of the Aldersyde-based Big Rock Bouldering club will climb at the Youth Boulder Nationals next weekend for the second year in a row when the championships kick-off in Vancouver.

“I’m really hoping to make finals this time. I think I can do it,” said Farr-Jones, a Grade 11 student at Highwood High School. “Last year I made nationals as well, but it was kind of a fluke I would say, some people decided they didn’t want to go and I ended up going and didn’t do very well.

“No matter how good of a gym climber you are, your first year of competition tends not to go very well. There’s a few on my team my first year who would be arguably better climbers than me in first year and they still didn’t do as good as they would like.”

The 16-year-old finished sixth at the regional meet in Calgary in January, featuring the top Youth A Male talent in Western Canada.

“It went really well, it was actually my first time in a finals at a competition which was a really good experience,” he said. “I didn’t do as well as I would have liked to in the finals, but I felt for me qualifying for the final round was amazing. One of the best performances I’ve ever had. It felt really good.”

At nationals, Farr-Jones will compete in the familiar 5-on-5-off format where athletes are given five minutes to solve and climb the charted course and five minutes off in what’s called ‘secondary isolation area’ to prevent the competitors from planning or strategizing prior to getting back on the wall.

The final round at nationals is the World Cup format, where the athletes are given access to the wall prior to competition to preview the four problems presented. Each climber is given four minutes with each problem and only advance to the next problem when each and every athlete has it completed.

Farr-Jones first dipped his toes into the sport some three, four years ago, joining his mom and her boyfriend at Calgary climbing centres. When Big Rock Bouldering opened its doors in Aldersyde, the curiosity soon became a passion and a terrific way to strength train.

“We went there a few times, started joining some classes then started competing,” he said. “It takes some getting used to, even if you’re say an exceptional hockey athlete or soccer athlete you’re not going to go into bouldering and be super strong. It’s really different from most sports.

“I really enjoyed it right off the bat because it’s something new and unique and it’s also an amazing workout. At this time, it was Grade 9 or 10 and all of my friends were starting to get gym memberships and I go climbing instead, it’s a lot more fun.”

After spending a year climbing on his own and getting to know the sport at Big Rock, Farr-Jones was approached by Big Rock Bouldering owner Chris Kershaw about joining the competitive team for the 2018 season. He joined the team that year and began taking part in competitive events in 2019.

“We’ve got a new coach this year Logan (Grasby) who has helped me a lot, I’ve had a lot of improvements with him that I don’t think I could have achieved on my own,” he said. “I can’t really focus that much on my own, I will go to the gym and just start climbing on my own and he’s really just helped me focus on training and making sure I’m always making improvement instead of getting distracted.

“It’s also nice to have somebody watch you while you’re competing and tell you ‘hey, you need to work on this.’ He’s helped me a lot with the stuff I’m not good at.”

Some of those adjustments include having the right mindset and temperament at events, transitioning from a hyper-focused nervous state into a more relaxed approach.

“I find I do better in a more relaxed mindset, not thinking of it too seriously,” he said. “I’ve actually done a little yoga, and from there I’ve taken the breathing techniques, thinking about calming thoughts, thinking like you’re climbing outdoors.

“I like to think of calmer things, but it also depends on what you’re climbing. If you’re climbing something super hard or powerful, you want to have a more intense mindset.”

For more information on Big Rock Bouldering go to bigrockbouldering.com.