Foothills Eagles back on the gridiron 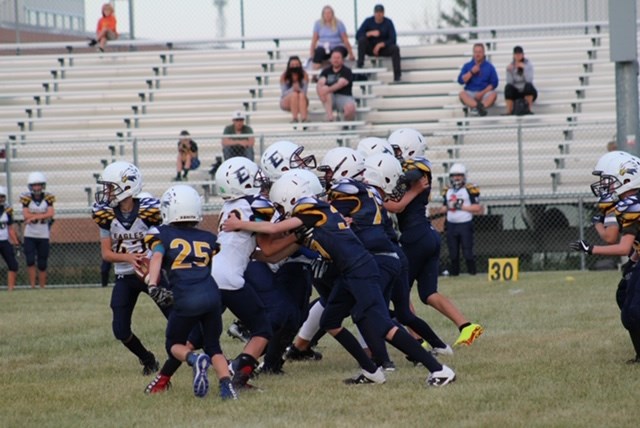 The Foothills Eagles Peewee teams square off during a 9-on-9 football game on Aug. 27 in Okotoks. (Photo submitted)

Youth football is making its return in the Foothills with a twist.

The Foothills Eagles Bantam and Peewee programs are back in action this month with a 9-on-9 football going ahead with strict cohort systems in place.

“A lot of people have done a lot of work, quite frankly, on this,” said Peewee Eagles head coach Lance Kelly. “Football Alberta has done a great job, they’ve worked with Alberta Health Services and different groups to give us a guideline and some rules.”

The Peewee Eagles had previously been practising within its 50-person cohort and with the start of game action, the group has split its players and coaches into two separate teams and cohorts — Eagles Blue and Eagles White.

“And we (Eagles) have to be completely separated from the other Eagles team. We worked together up until last Thursday.”

Kelly said 24 is the maximum number the Eagles cohorts can have within each group, including coaches, equipment managers, field staff.

Safety and physical distancing protocols are in place for everyone involved.
The 9-on-9 version of the game has 50-yard sidelines with cones marking the changes in dimension. There’s an allocated space for officials with the on-field officials sporting gaiter masks.

“The original sideline marker is about seven and a half yards wide and that space is for officials only,” Kelly said. “Players are allowed to run through it to get on and off the field, but no one else is allowed to be in those spaces.

“That allows the officials to have some space to officiate the game and not be part of the cohort, socially distanced and away from everybody.”

In terms of positions, the 9-aside game limits the amount of linemen with no tackles on the 0-line, just two guards and a centre as well as two eligible receiving blockers who play something of a tight-end role on the offence.

“I coach Peewee and that’s where they learn football so I don’t know that it’s been a big adjustment,” Kelly said. “It’s been a much bigger adjustment for the coaching staff than the kids, I think.

“I had a kid the other day say ‘what do I do when this happens? And I said I don’t know, let me think about it.’ I’ve never had to do that before, but I don’t actually know what the assignment is.”

The 9-on-9 game was going to be a part of Peewee aged football anyway, the pandemic merely accelerated that formula, Kelly said.

“Nine-on-nine is coming to the province of Alberta, uniquely Calgary was the only league that didn’t go to 9-man,” Kelly said. “Calgary is kind of the envy of the football world a little bit, we’ve always been ahead, we do concussion testing for Bantams, we have on field trainers that specialize in concussion protocol, we were one of the first leagues to adopt weight limits not seen in many other jurisdictions for certain positions. We have a lot of rules around player safety.”

One silver lining to the 9-man game is it allows teams to run with smaller numbers, with regional needing only 15-20 kids to field a squad, Kelly said.

“The mental health of the kids is really important in this whole time we’re in, it’s hard and they need to be able to get with their friends.”

For Kelly, the structure that organized sport provides is invaluable and creates a safer environment for them to be in during the pandemic.

“They’re safer with us, people talk about COVID-19 and the risks, the cohorts and everything else,” he said. “Football is a family environment and I’ve had parents say I’ve never seen my kid wash his hands more than after coach told him he has to wash his hands.

“We have protocols in place, we sanitize all the equipment, coaches are wearing masks and (the players) are constantly aware of their environment and doing what the coaches are saying. Whereas other kids their age are just going to the park and hanging out with their friends and there’s not those controls around their activity and they’re not getting that message.

“I think all of the athletics should just be rolling, I’m a little concerned that they’re not. Kids will listen to their coaches, they will sacrifice for the team.”

For more information on the Eagles visit gofa.ca