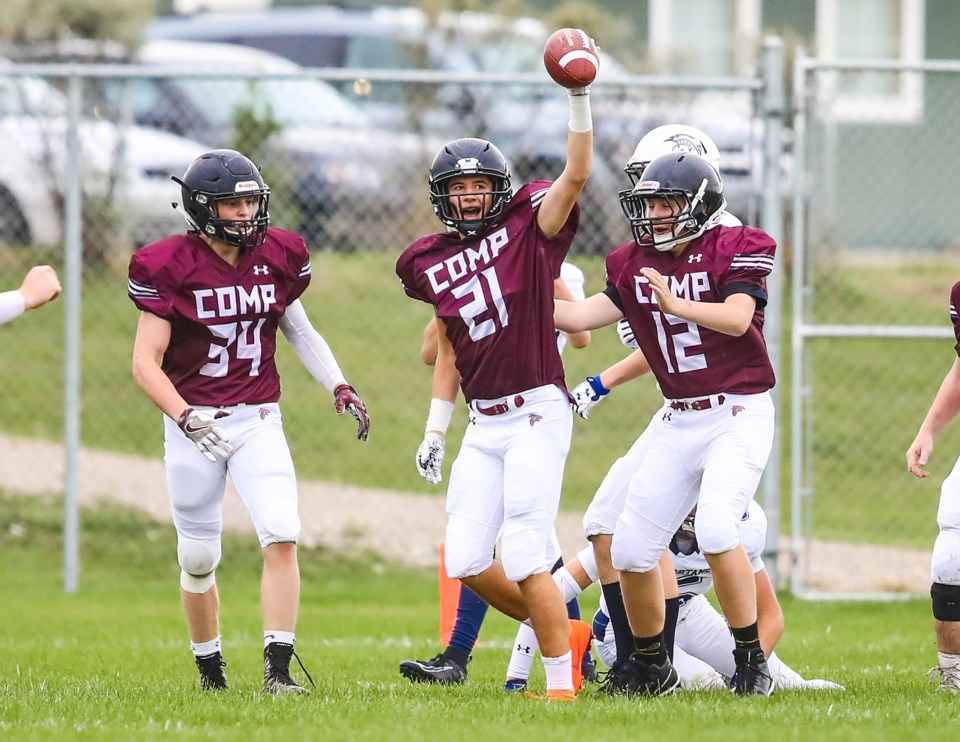 Jamison Strilchuk, middle, comes away with the ball during his Grade 11 season with the Foothills Falcons. Strilchuk is headed to the University of Windsor Lancers in fall 2021. (BRENT CALVER/Western Wheel)

One year of high school football was enough for a Falcons ace to make an impact.

Foothills Falcon Jamison Strilchuk is moving onto the next level despite missing out on his senior season on the gridiron as a sterling Grade 11 year earned the defensive back a commitment to the University of Windsor Lancers.

“They told me they were trying to find me last year after my Grade 11 season,” Strilchuk said. “I wasn’t planning on getting any offers anywhere, I didn’t play in Grade 10 and was just getting back to football in Grade 11 and then planning on this year being the year where I would possibly get an offer.”

That wasn’t in the cards as the COVID-19 pandemic wiped out any hopes of a football season during the fall.

Fortunately for the Okotokian, one year was enough to get on the radar of the U SPORTS school.

The Lancers compete in the highly competitive Ontario University Athletics conference against the likes of Western, Guelph, Wilfrid Laurier, Windsor, McMaster and Queen’s.

“My mind wasn’t on football at all until I got a text from them saying ‘hey, we want to talk to you’ and it just went off from there,” Strilchuk said. “They had a coach or two going through every team in the province’s film and their offensive co-ordinator, he liked how I played.

“Just because when I’m playing, I have no fear for my safety or well-being, I just go and have fun and if I get hurt, I get hurt. They liked that and saw they could do something with that so they sent it to the defensive co-ordinator (Patrick Donovan).”

Strilchuk was named the Falcons defensive rookie of the year on head coach Nathan St. Dennis’ squad last season with a penchant for dishing out punishment in the secondary.

“What Windsor saw, they talked to me, and I saw the same thing with him and what we really enjoyed about having him is that he plays with no fear,” St. Dennis said. “It’s even more rare nowadays for some reason, it’s a hard thing to find.

“And then he’s got a great frame, he’s a big kid and still has the potential to put on a ton of size and he moves really well, he takes angles well, he gets to the play.

“The one year he played for us he was a part of everything defensively, he turned into a leader almost instantly too.

“I think all of those qualities add up to a clear understanding of why Windsor was interested in him.”

The Foothills Grade 11 Male Athlete of the Year as a football, basketball and cross-country athlete, tried not to let school sports cancellations get in his way.

“Once sports got all shut down, it just dropped from my mind, I didn’t think about it,” Strilchuk said. “For a while I was still playing basketball in spring, because community (ball) is different than school so I was playing with the community team I’ve been playing with
since Grade 8.

Strilchuk plans to study criminology and history at the Ontario school with the career goal of working as a police officer.

“I have some friends in Toronto and Ottawa,” Strilchuk said. “But otherwise this is completely new which is good because I’m starting new, meeting new people and making new connections and refreshing myself in a new environment.

“It will be nice because a lot of people in town I’ve grown up with so it’s been the same people since kindergarten so it will be nice seeing a new group and having a new team to mess around with.”