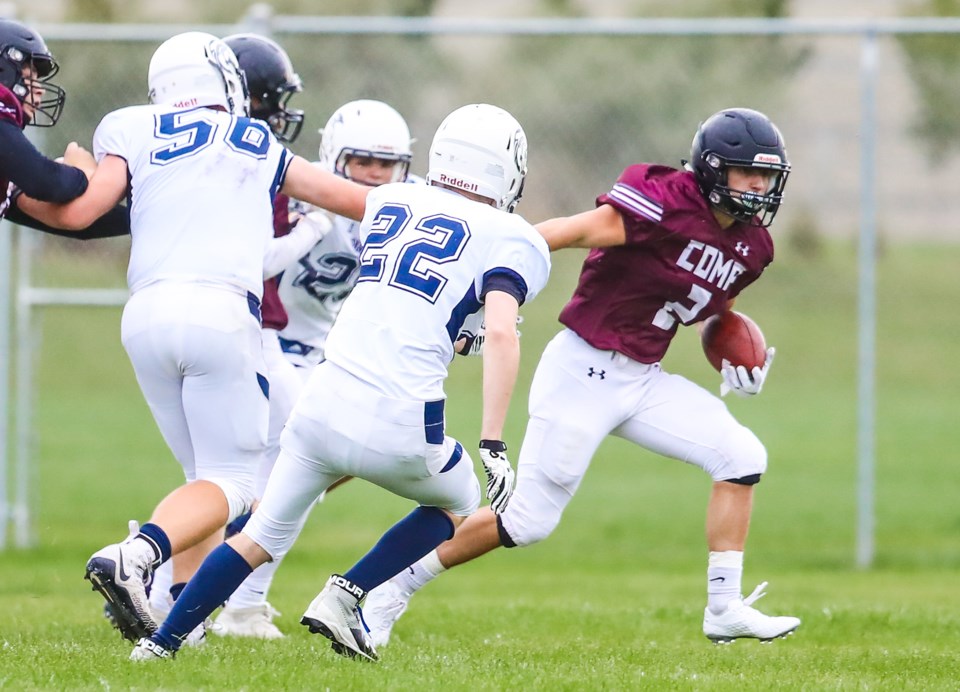 The Foothills Falcons know it’s not a good idea to take a Cobra lightly.

The Falcons overcame some early mistakes to down the Rundle Cobras 34-0 in Calgary Thursday evening.

“We preached to the guys this week that we definitely don’t take Rundle lightly,” said Foothills Falcons head coach Nathan St. Dennis. “Even though they are a smaller Tier III school, it was important that we do things right.”

It took them a while but the Falcons started to take flight after making more turnovers than a baker getting ready for Thanksgiving treats.

“We did not show well offensively off the start,” St. Dennis said. “I think we had three turnovers in our first few plays.

“We just dropped the ball, nothing fancy, from some guys who have been playing for a long time… We just had some weird errors.”

However, on this night, Foothills had a neither bend nor break defence.

“Our defence responded,” St. Dennis said. “Rundle had the ball in our end off the start because of the turnovers and we played great.”

“He’s very physical, he flies to the ball — he had a great game for us,” St. Dennis said.

Defensive back Trey Peacock had an interception in the victory.

The offence hit on all cylinders after some initial sputtering.

Runningback Eton Nelson had a rushing touchdown in his impressive senior year.

“Eton is playing great and he is healthy,” St. Dennis said. “He’s having a great time being one of our leaders and he is pretty dynamic once he gets the ball.”

“Tyson is a tough kid, he’s not afraid of contact which we love,” St. Dennis said of the Grade 11 QB. “He will gut it out and make plays for us when we needed it.
“We’ve enjoyed the progression he has made… We’re excited for the future with him.”
The Falcons are evolving as they started the year with several new players.

“I have been really happy with the way the guys have responded,” St. Dennis said. “We knew that going into this season we were a young group.”

Despite losing to the arch-rivals Holy Trinity Academy Knights earlier in the season, St. Dennis saw that game as a turning point.

“We don’t ever like losing to HTA obviously, it’s a big game, but it was one of those weird games where we lost the football game, but the coaches felt pretty good about the way responded.

“We saw the mistakes that happened and moving forward with (victories) over Centennial game and now Rundle, we are seeing some guys come through and feel really confident about what they do on the field,” St. Dennis said. “Hopefully, it builds into what we want to do this season and into the future."

The victory over Rundle wrapped up the regular season for Foothills and the Falcons will have at least two more games and likely three more this season.

Foothills take on the Strathmore Spartans Oct. 18 at the Comp at 5 p.m. in the Big Rock Council semifinal.

The winner of that game will face the victor of the HTA Knights vs. Rundle Cobras in the other semifinal.

The Big Rock Council final is tentatively set for Oct. 25 and, barring some Goliath-like upsets, will be in Okotoks.

The Falcons season won’t be over regardless of how they do in the Big Rock.

Because of higher than expected enrolment, Foothills has crept past 1,250 students putting them in Tier I with the St. Francis Browns and Raymond Comets of the world.

As a result they will play a Tier I provincial play-in game against the Fort McMurray Saints on Nov. 2 in Edmonton.