Falcons look to build on momentum for Blackout Game 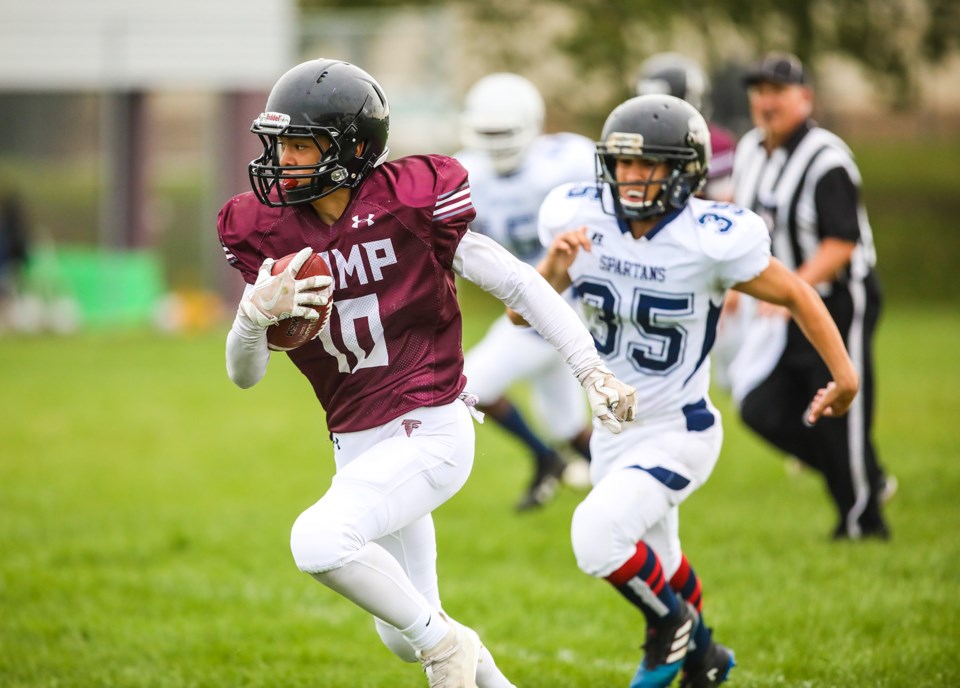 Michael Eagle Bear had the Falcons touchdown in the 33-8 loss to Hunting Hills on Sept. 13. Foothills and HTA battle in the Falcons Blackout Game on Sept. 20. (BRENT CALVER/Western Wheel)

A strong finish against a top-ranked opponent has sprung the Falcons into rivalry week.

The Foothills Falcons won the second-half after falling behind early in a 33-8 loss to the No. 3 ranked Hunting Hills Lightning Friday night in Red Deer, seven days before its annual Blackout Game against the Holy Trinity Academy Knights.

“It was a good experience for us, we knew it was going to be a big game,” said Falcons head coach Nathan St. Dennis. “And we’ve always tried to schedule Hunting Hills because they’ve always been a strong Tier II team that has always ended up making it into the provincial playdowns.

“It was mixed emotions, the first half was not great for us, we made some mistakes that didn’t help ourselves, but our second half was awesome. The guys responded really well.”

Hunting Hills built a 26-0 cushion at the half.

Foothills bounced back by taking the second half by an 8-7 advantage on a safety as well as a 70-yard touchdown connection from quarterback Tyson Camel to receiver Michael Eagle Bear.

“The guys responded, they’re a physical team, but we made some adjustments,” St. Dennis said. “We’ve got a ton of kids and it’s all new to them, a lot of kids playing their first year of high school football.

“We had a couple guys in a few positions we don’t normally have due to injuries and absences.”

The coach credited the physicality of the defence, noting the efforts of defensive halfback Hunter Romeril and lineman Gage Assels.

“Up until now he had been starting at half for us, he had to step in at the runningback role,” the coach added. “He had a great game, he was physical and played the entire game at that position as well as playing in his half position.

“That’s a big deal for a Grade 10 kid in that position and he responded really well.”

With some wind in its sails leaving Red Deer, Foothills returns home for the can’t miss match-up of the season in the cross-town clash with the Knights.

Opening kick-off for the Sept. 20 battle is 7 p.m. at Falcons field.

“The Blackout Game is a big tradition and has been built long before I was here and it’s something the kids naturally get excited for,” St. Dennis said. “It’s a big thing for the community and being able to have a Blackout Game that aligns with us playing HTA is always special for us.

“It’s going to be great to have the town here Friday night supporting both sides and the great athletes we have here in the town.”

“I’ve been watching a lot of film on them this weekend and they look great, I knew they were going to be pretty good with the athletes they have,” St. Dennis said. “It’s a little different for us, in the six years I’ve been here I don’t think I’ve ever been in the situation as an underdog. It’s an interesting perspective for us and we’re embracing it.

“Any given day, at any point we have the ability to do good things and I’m just waiting for things to align for us. We’ve had our own mistakes, our own issues and hopefully Friday night we can put things together and make a great game.”

Matt Hassett, the head coach of the Knights, said it's a game that both teams have circled on their collective calendars.

"They are one of the strongest teams in our league (the Big Rock Conference) and we have to win our league to get back to provincials," Hassett said. "We just have to focus in on what we do. To me it is one of the best games on the schedule, there is nothing like a rivalry game.

"Our boys will be up for it — sometimes we have been too up for it."

He said he knows Foothills will be ready.

"They have a good running game and their quarterback Tyson Camel, is getting better each week," Hassett said. "Foothills is always well coached. If you take them lightly, they are going to hurt you."