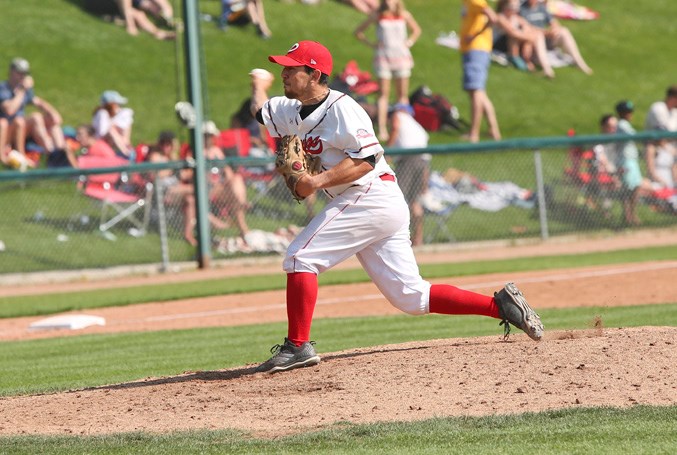 Eddie Sanchez throws one of his fastballs in the ninth inning on July 29 at Seaman Stadium.

The Okotoks Dawgs fan-favourite lived nine lives in the regular season swansong. And fortunately for Eddie Sanchez his first life behind the plate was over in a flash as he played all nine positions on fan-appreciation day, Sunday afternoon at Seaman Stadium with the Dawgs doubling up the Lethbridge Bulls 6-3 in the WMBL finale. “I didn’t know about this until a couple days ago, it was all the coaching staff,” Sanchez said. “As soon as Mitch (Schmidt) told me I was playing everywhere I told him catching is not something I’ve done a bunch of times so let’s get that out the way real quick.” Sanchez, the middle infielder, wore the tools of ignorance in the top of the first inning and made his way counter-clockwise across the infield inning by inning. “Infield I was confident that I was going to make the plays because I’m an infielder,” he said. “Outfielding, it seems kind of easy, but I was telling the pitchers today just groundballs and strikeouts, no fly-balls.” His turn in the outfield from innings six to eight was also a new experience for the Mexico City native. He almost made it out unscathed until a deep fly ball to right field in the eighth inning went over his head. “Eighth inning my legs were gassed and I saw the ball coming and heard them call back, back, back and I thought ‘this isn’t good,’” he said with a laugh. Sanchez saved his best for last, coming onto the mound for the ninth inning with the Seaman Stadium faithful spurring him on with a standing ovation. “I was tired, but the crowd gave that little bit of extra energy to get me over,” he said. “I used to pitch when I was little, high school I had maybe three innings at most. As a position player, you like to say you can pitch.” The gregarious Dawgs Academy graduate looked comfortable on the mound, forcing an infield fly and then pitching a strikeout. Sanchez wisely followed the advice of catcher Cole MacLaren who called for the fastball on every pitch. “I like to think I have a lot of pitches, but Cole called the game,” Sanchez said. “It was whatever he called and he called all fastball.” Initially, he was only going to pitch to one batter, but with the fans ushering him on he decided to delay pitching coach Joe Sergent’s call to the bullpen for closer Craig Smith. Smith came into the contest for the final out, recording his 15th save of the season, a Dawgs and WMBL record. “Joe was coming to get me and I said ‘this is my guy, let me do it,’” Eddie said. Sanchez is the first Dawg to play at every position in a game since utility player Mark Riendeau accomplished the feat in the 2014 season. Okotoks’ win, its eleventh consecutive triumph, pushed its record to 35-12, matching its win total from last season. Playoffs on deck The fun and games switch into playoff mode as Okotoks meets the Edmonton Prospects in the first-round best-of-five series for the third straight season. Game 1 is July 31 at Seaman Stadium. Edmonton, the third-seed with a 23-23 record, has knocked Okotoks out of the playoffs for two years running. The top-seed Medicine Hat Mavericks and fourth-seed Lethbridge Bulls meet in the other WMBL Western Division first-round series. “This time we’re going into it with a pretty good mindset to go in and roll them and get some payback for the past couple years,” said Dawgs infielder J.T. Patterson. If regular season is any indication, the Dawgs are well-positioned in the match-up. Okotoks took seven of eight regular season meetings with the capital city squad. That’s cold comfort for those on the diamond. “It’s a clean slate,” Patterson said. “It’s a completely different ballgame, it’s anybody’s ballgame. We’re going to show up this year to win.” The post-season often comes down to pitching, defence and timely hitting. For the Dawgs, a rotation featuring the likes of Mason Swegarden, Cody Ebert, Carter Robinson and a bullpen highlighted by record setting closer Craig Smith should give them a terrific opportunity to advance. Ebert and Swegarden tied for the league lead with 6 wins, Ebert was second in the league with 65 strikeouts while Robinson’s microscopic 2.36 ERA was second lowest in the WMBL. “Mainly, it’s going to come down to pitching,” Patterson said. “There are going to be tight games where it’s one run, that’s just the way playoff baseball is, the games are going to be close. “We have a lot of confidence in our staff.” WMBL first-round series schedule Game 1: Edmonton at Okotoks. July 31, 7:05 p.m. Game 2: Edmonton at Okotoks. Aug. 1, 7:05 p.m. Game 3: Okotoks at Edmonton. Aug. 2, 7:05 p.m. Game 4: Okotoks at Edmonton. Aug. 3, 7:05 p.m. Game 5: Edmonton at Okotoks Aug. 4, 7:05 p.m.