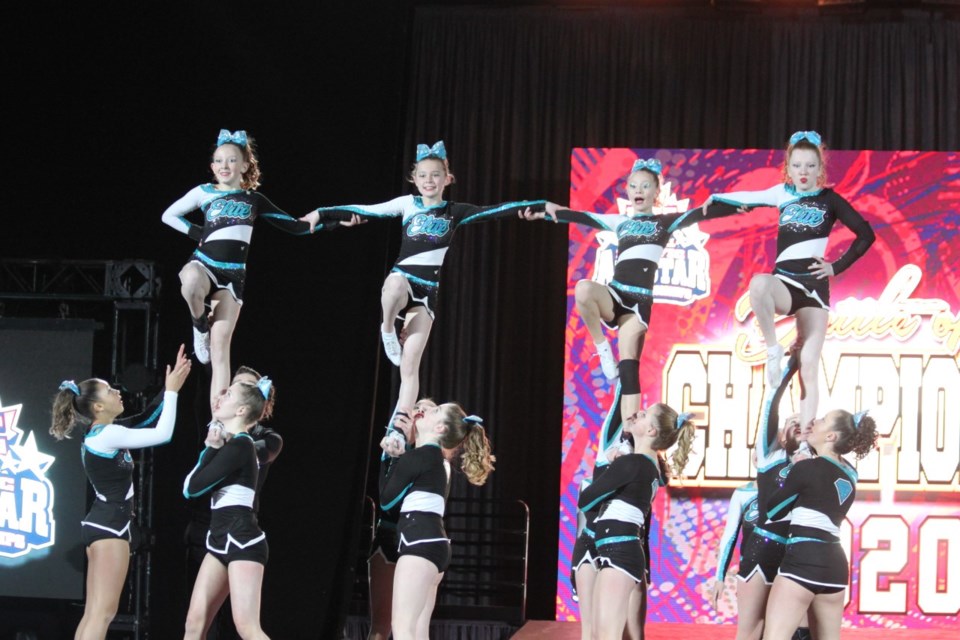 The Diamond Elite Cheerleading's Brilliance Team performs at the Battle of the Champions earlier this month in Calgary. The team earned an at-large bid to The Summit in May. (Photo courtesy Michelle Barratt)

There’s plenty to cheer about for an Okotoks club headed for the Sunshine State.

Diamond Elite’s Brilliance Team turned in a pair of clean performances to remember at the PAC Battle of Champions event earlier this month at Calgary’s Nutrien Centre to earn one of the coveted at-large bids to Varsity Spirit’s The Summit at Florida’s Walt Disney World Resort this May.

“This is a huge milestone, Summit is like worlds,” said Diamond Elite cheerleader Madison Barratt, a seven-year member of the club. “Summit is worlds for Levels 1 through 5, it’s a huge deal, teams from all around the world come.

“I think we’ve been thinking about it for the past two years we just haven’t had the athletes to build the team in previous years. This is a really big event for us.”

They got the good news on their winning bid via a Varsity TV live-stream, a moment that will be hard to forget.

“It’s breathtaking, I never thought it was going to happen,” said Diamond Elite’s Madison Lacey. “I just wish I could re-live the moment again of us getting the bid.

“But we’re always happy now because we know we’re going to Florida.”

“We were sitting down there waiting for an interview on the TV and when it actually happened I didn’t know what to think,” Deibert said. “I couldn’t think properly.”

The two-day Battle of Champions had the teams put on two performances, the first one worth 25 per cent and the second counting towards 75 per cent.

“It was very nerve-racking because day one there were some really strong teams and some weaker teams because they weren’t having a good day, they fell and stuff was going wrong,” Barratt said. “Then day two we thought ‘okay, they’re probably going to have their stuff together today.

“We didn’t have a good warm-up that day so we were really nervous and then we had a clean hit again on the second day and it felt really good after we completed our routines.”

Team Brilliance lived up to its name on both days by hitting a zero, performing a routine without any deductions, twice to finish second in their international Junior-2 division.

“I just remember right before we went on we heard our name called and we were running around, all excited and we were all like ‘okay this is our one chance to do this,’” Lacey said.

“I feel like our team does well under pressure.”

For the Okotoks and area club reaching the Summit is more than a breakthrough in its seventh season.

“We tried last year, but you have to have 16 to 24 athletes, it’s a little challenging in a small town like ours.

“For us, small gym, it’s pretty impressive to get a bid.”

Barratt, one of the few members of its team since its inception, has seen Diamond Elite grow in leaps and bounds in its nomadic journey in the Okotoks area which has it at its current home at the Edison School gymnasium.

“It has grown so much, it’s so different than it was before,” she said. “It’s crazy how much it’s changed. We started in a dance studio so the roofs weren’t very high, this is the fourth location, I believe.”

Now that they’ve qualified for The Summit, the team will train extensively to reach its peak on the first weekend of May. That means five hours per week of training plus an additional four hours of training on their other teams at the club.

“We’re changing our routines and we will have one final competition in the middle of April,” Barratt said. “That’s where we will go one more time against one of the teams who is also going to Summit so we will see how we’re preparing up to them and how they’ve changed their routine.

“So we will have a little bit of an insight on how the competition is going to look down at Summit.”

The jaunt to Florida isn’t cheap. The Diamond Elite parent association is hoping to fundraise upwards of $35,000 to help fund the team’s journey to The Summit.

For more information go to diamondelitecheerleading.ca