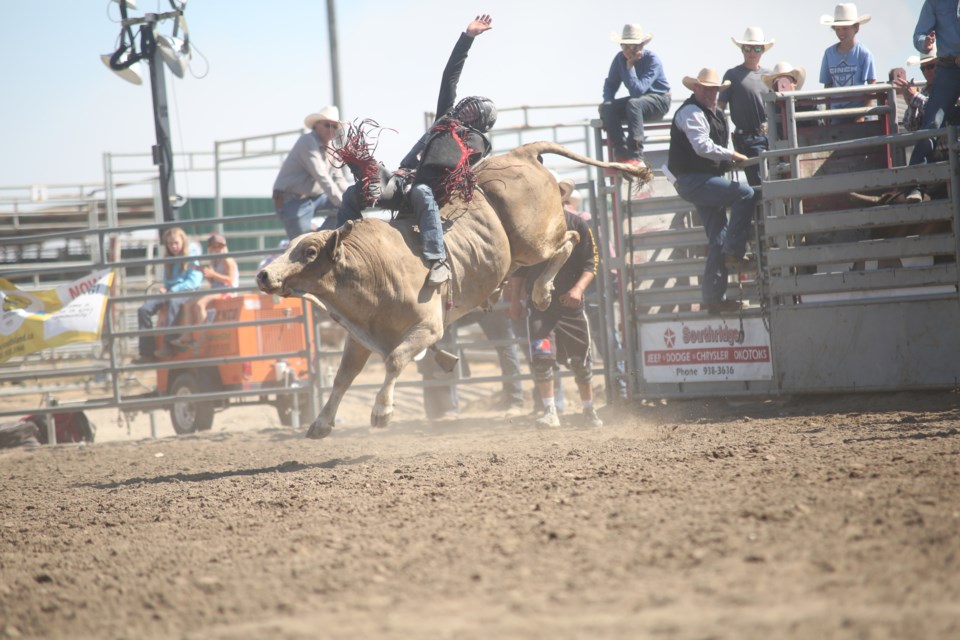 DeWinton's Brock Radford, here at the Okotoks rodeo, finished tied for third in the July 10 go-round of bull riding at the Calgary Stampede.

Radford finished in a three-way tie for third-place in Wednesday's go-round with a ride on Jukebox Hero for an 85. He picked up $2,500 for his efforts.

He still has some work to do. Radford sits in seventh place with $2,500 won after the first two go rounds of Pool B.

The top four after today and Friday's go-round advance to the $100,000 Sunday Showdown on July 14.

The bull riding was won on Wednesday by Jose Vitor Leme with an 88.

The future looks bright for rodeo in Okotoks.

Sawyer Eirikson finished second in the novice saddle bronc with a ride of 62.5. He is the son of rodeo hall of famer Tom Eirikson.

Sawyer was edged by a familiar name K's Thomson who had a 64. Thomson is related to the famed rodeo family in the Black Diamond area.

Rodeo action continues today at 1:30 p.m. at the Calgary Stampede.

You can't keep a good man down.

One day after taking a Stampede-deflating 15 seconds in penalties, High River chuckwagon driver Jason Glass turned things around by finishing seventh among 36 drivers on Wednesday night with a time of 1:11.66.

The other Foothills drivers weren't so fortunate.

Blackie's Jordie Fike was 30th, and Okotoks' Mark Sutherland was 35th after taking 15 seconds in penalties.

With just two more days of racing before the semifinals, it is unlikely the Foothills trio will get an invite by cracking the Top 8.

Fike is 19th in the aggregate, Glass 27th and Sutherland sits at 34th.

The night was saddened when a horse had to euthanized for the second time at this year's Rangeland Derby.

For more information go to calgarystampede.com