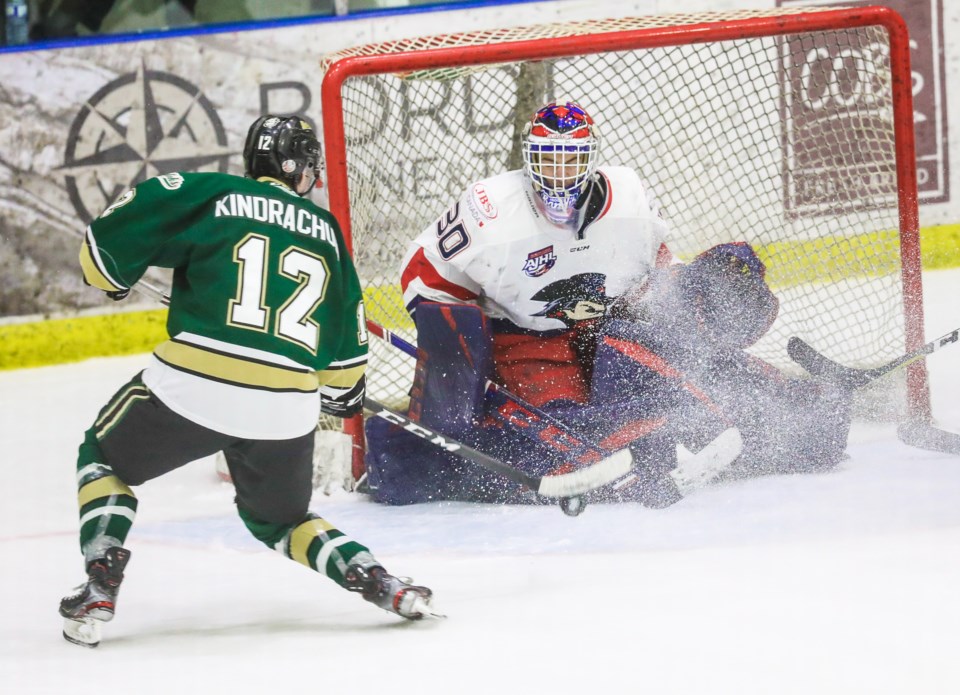 Zane Kindrachuk and the Okotoks Oilers edged the Brooks Bandits 2-1 on March 28 at Pason Centennial Arena to improve to 7-1 on the season. (Brent Calver/Western Wheel)

Something had to give when a pair of South Division rivals on a roll clashed in Okotoks.

And for the Okotoks Jr. A Oilers the winning streak was pushed to four games as they handed the Brooks Bandits their first regulation loss of the 2020-21 season and improved to a division best 7-1 with a 2-1 triumph in a defensive battle March 28 at Pason Centennial Arena.

“I think the biggest part for our plan going in is we want to do it for each other and do it for our 20-year-olds,” said Oilers captain Carson Dyck, a 2001-born centre and Penn State commit. “That’s what we’re working towards right now, we’re building towards next year too, but a big part is getting those 20-year-olds those scholarships.

“That’s our main focus right now, playing for them.”

A pair of snipers with North Dakota sweaters in their future ensured their present day surroundings got off on the right note as Fighting Hawks commits Bowden Singleton and Dylan James staked the hosts to a 2-0 advantage in the opening frame.

Sean Chisholm cut the lead in half with a second period tally during 4-on-4 action, but that’s all the visitors could muster in Big Rock Country with third-year goalie Brady Parker turning aside 24 of 25 shots for his fourth win of the campaign.

“We just locked down our d-zone and wanted to really focus on helping Brady out whatever way we could,” Dyck said. “It was just playing a tight game and of course doing it for each other.”

In the weekend opener a veteran returning to the lineup made up for lost time.

Niagara University commit Zane Kindrachuk, after missing out on the previous weekend’s action, made his presence felt with a two-goal outburst as the Oilers held off a surge to dispatch the Calgary Canucks 3-2 in overtime on March 26 at the Ken Bracko Arena.

Dyck was credited with the game winner, getting the last touch on the puck after Brayden Morrison created a breakaway opportunity with terrific speed in open ice.

After Kindrachuk’s tallies, the first on the powerplay in the opening frame and the second on a shorthanded break in period two, the hosts rallied to even the score with a pair of goals on powerplay opportunities with Jaxsen Wyatt and Dylan Clark tickling the twine in a two-minute span late in the middle stanza.

Parker Sawka made 33 saves on 35 shots for his third win of the season.

The last line of defence has continued to be a strength with the Green and Gold getting terrific netminding from both Sawka and Parker, with the latter now boasting a .935 save percentage and 1.81 goals against average in five games.

“They’ve been awesome, those two guys,” said Dyck of the tandem. “We know we can go into any game and know we’re going to have a chance to win with those two playing.”

Okotoks closes out its three-team cohort action with Calgary and Brooks with a jam-packed three games in five days slate starting this weekend. The Oilers are home to the Canucks on April 2 and then make a pair of trips to Brooks’ Centennial Regional Arena on April 4 and 6, the latter a makeup date for the postponed March 20 contest.

The three-team cohort system with the Alberta Junior Hockey League’s Return to Play has the teams playing exclusively on weekends and affording more regular practice ice times during the weekdays.

“We have a lot more time to work on our systems and it’s a good prep for the college schedule because that’s how a lot of colleges do it with those weekend games,” said Dyck, noting this week’s busy game schedule will be a challenge. “Three games in five days, it will be a test of our endurance and we’ve just got to take care of ourselves.”

For more information go to okotoksoilers.ca.

Ice chips... Foothills hockey fans will want to keep a keen eye on the NCAA Frozen Four tournament. Once again, Okotoks area graduates are well positioned to make noise at the Division I college hockey championships with the University of Minnesota Duluth headed into the final four with a chance at their third straight championship. The Bulldogs, which feature Oilers alumni up front in Tanner Laderoute and Quinn Olson, knocked off North Dakota 3-2 in the longest game in NCAA Frozen Four tournament history on March 27 after Luke Mylymok scored the game winner at 2:13 of the fifth overtime. Okotoks minor hockey alum Zachary Okabe and St. Cloud State are also through to the next round after knocking off Boston College and Boston University. The other finalists are Minnesota State and Massachusetts. The Frozen Four semifinals on April 8 pit Massachusetts against Minnesota Duluth and St. Cloud State versus Minnesota State with the final on April 10.