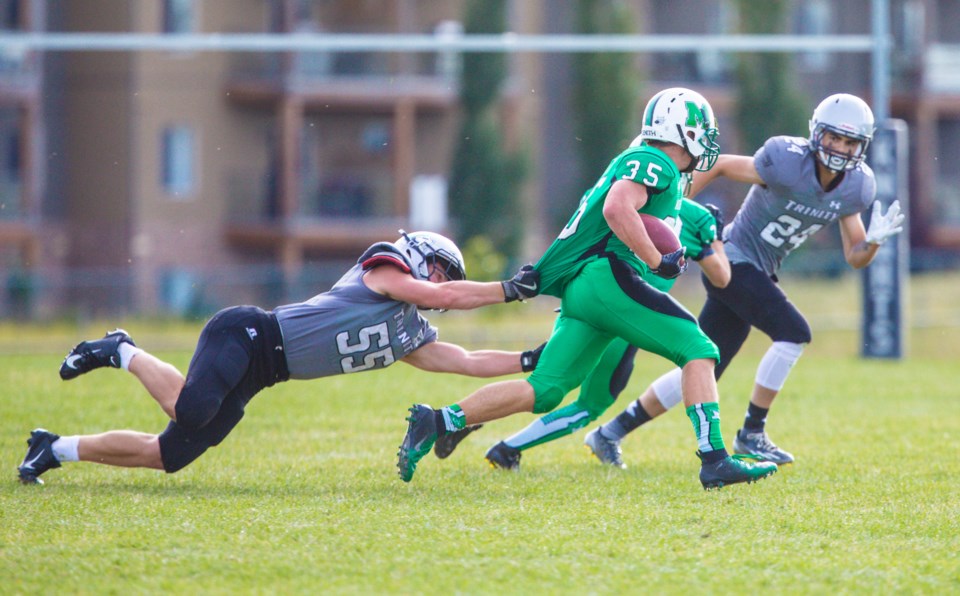 Linebacker Jack Dutton (55) and the Holy Trinity Academy Knights defence were big factors in the 10-6 win over the Hunting Hills Lightning on Oct. 4 in Red Deer. (BRENT CALVER/Western Wheel)

The Knights undefeated mark is intact entering the final week of the regular season.

Holy Trinity Academy (5-0) rode a stingy defence to a 10-6 triumph over the Hunting Hills Lightning Friday night in Red Deer in a meeting of the first and third ranked Tier II high school football teams in the province.

“I didn’t think we played particularly well, but our defence did,” said Knights head coach Matt Hassett. “(Hunting Hills) moved the ball quite a bit, but it’s that bend but don’t break philosophy.

“I think our guys did a good job, only giving up six points, just two field goals.”

Hassett wasn’t as thrilled with the performance of the team’s high-powered offence.

There could have been a few factors at play with the team not having played since its Sept. 20 victory over Foothills Composite.

“It was a bad week with practice, we couldn’t be outside,” Hassett said. “The first time we were outside was actually in Red Deer and it was beautiful there, they didn’t have any (snow).

“But despite that we still got the victory.”

Trailing by a slim 3-2 margin at the half, the Knights took the lead for good early in the third quarter.

Quarterback Ben Leggett feathered a pass for Nick Dielissen, who got behind the Lightning secondary on a cross-route and the blazing fast receiver turned on the jets, followed a block from Luke Gutek and charged into the end-zone.

The touchdown was enough to solidify the victory and hand the Lightning their first loss of the campaign.

Before the final whistle, the Knights suffered a potentially big blow.

Dielissen sustained a lower body injury later in the contest, one that could potentially see the Grade 12 athlete sidelined for the rest of the season.

“After this week we have to work a little bit harder,” Hassett said. “But I like where we’re headed, we’ve just got to come together a bit more as a team, we cut down on the penalties this past week.

“Other than that we’ve just got to keep working hard and keep getting better each week.”

Next up, the Knights take on the Strathmore Spartans on Oct. 10 at 5 p.m. with the Big Rock Football Conference playoffs opening the following week.