Okotoks Dawgs walk it off in Game 1 thriller 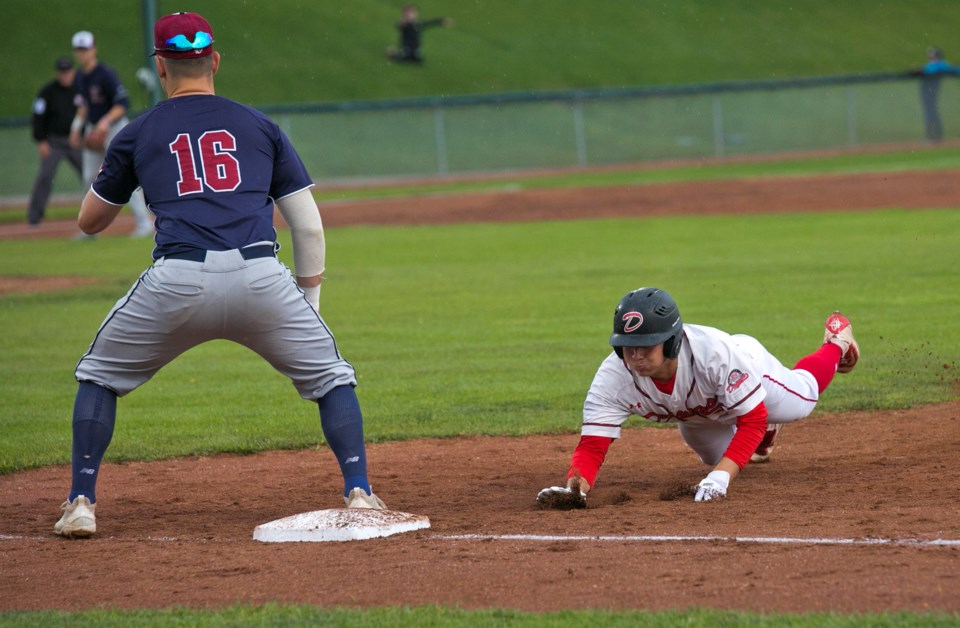 Okotoks Dawgs shortstop Ricardo Sanchez slides back into first to avoid a pick-off attempt during the 6-5 win over the Lethbridge Bulls in Game 1 of the WCBL Western Final, Aug. 11 at Seaman Stadium. (Remy Greer/Western Wheel)

The Dawgs walked off with a victory worthy of a Western Final opener on Sunday.

Brett Esau singled in the winning run with the bases loaded in the bottom of the ninth as the Okotoks Dawgs knocked off the Lethbridge Bulls 6-5 in a seesaw thriller in Game 1 of the WCBL Western Final at Seaman Stadium.

“It feels amazing. That’s everything that you wish for when you play baseball is to have that opportunity,” said Esau, a Dawgs Academy grad from Meadow Lake, Saskatchewan. “Even as a kid playing in your backyard you’re thinking bottom of the ninth, bases juiced, two outs, you’re ready to go.

Okotoks used small ball to erase a 5-4 deficit entering the bottom of the ninth.

Davis Todosichuk reached on an infield single then middle of the lineup hitters Jacob Melton and Will Hollis executed perfect bunt singles to load the bases with no one out.

“We focus on that every day before BP (batting practice), getting our bunts down,” Esau said. “We’ve got a really fast lineup so everyone is hard out of the box all the time and that speed pressure puts a lot of effort and pressure on their defence.”

Catcher Gavin Logan drove in the tying run on an infield error by the Bulls.

After Dane Tofteland struck out, Esau worked the count full and sat on a fastball knowing Bulls reliever Evan O’Toole could not afford to miss the strike zone.

“He definitely throws hard, he’s one of the firmer guys in the league and I know he has a really good slider when he gets it down,” Esau said. “Bases loaded, full count you’re just hoping he doesn’t throw (off-speed). He comes with the fastball down and I just really stayed on it.”

The Bulls made it interesting late in the contest with a four-run eighth inning. Okotoks almost got out relatively unscathed, but a potential double-play turned into a throwing error and Lethbridge scored two on the play to even the score 4-4.

The visitors then took their first lead of the game on a blooper to right field off the bat of second baseman Ashton Roy.

Okotoks got terrific starting pitching for the second night in a row with southpaw Galen Manhard throwing 7.1 innings, allowing just two earned runs on four hits while striking out 11.

“He put it all on the line and gave us an opportunity to win the game,” Esau said. “We ended up coming out on top and (Manhard) was very grateful.”

The Dawgs opened the scoring on a bases loaded walk to Logan in the first inning and regained the lead in the sixth on a Ricardo Sanchez sacrifice fly.

Melton, who went 4-for-5 on the night, then made it a three-run lead in the seventh crushing a two-run dinger to right centre for his first big fly of the post-season.

“This definitely sets the momentum for going out on the road,” Esau said. “It really puts the pressure on them in their home ballpark.”

If necessary, Game 3 would be Tuesday evening at Seaman Stadium.

For more information go to dawgsbaseball.ca