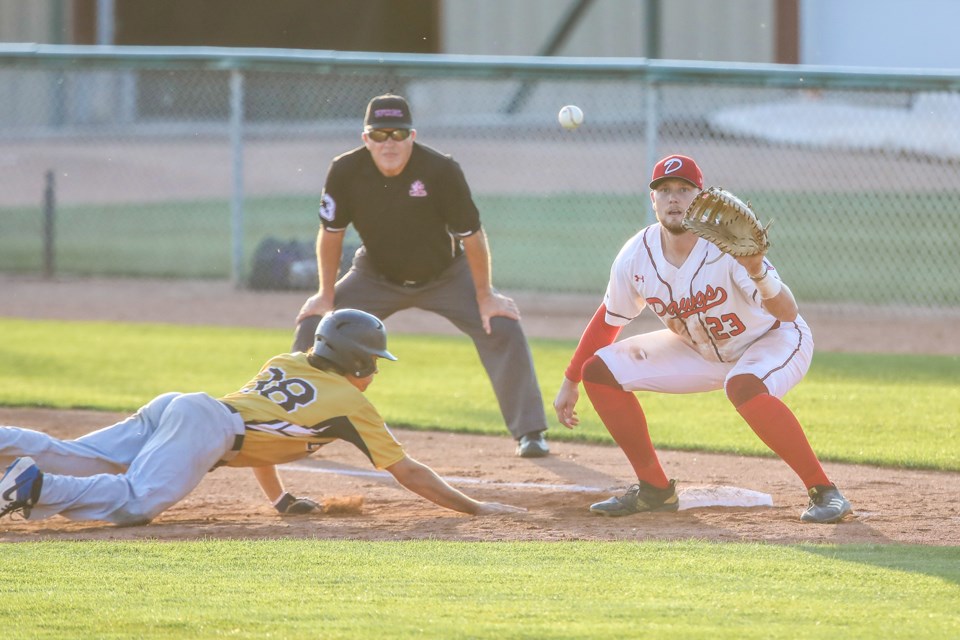 Okotoks Dawg Dane Tofteland moves to tag out an Edmonton Prospect in the first game in the playoff series at Seaman Stadium on Aug. 8. (BRENT CALVER/Western Wheel)

The best-of-three WCBL Western semifinal is going the distance.

The top seed Okotoks Dawgs host the Edmonton Prospects for the win-or-go-home Game 3 of the best-of-three opening round playoff series Saturday night, 7 p.m. at Seaman Stadium.

Edmonton fought off elimination in Friday night's Game 2, mounting a three-run tenth inning to edge the Dawgs 5-4 on a walk-off single at RE/MAX Field.

The Dawgs were held off the scoreboard by Prospects ace Hunter Boyd until the eighth inning, when they put up a pair to tie the contest 2-2 and force extra innings.

The visitors put up two runs in the tenth inning on a Gavin Logan RBI single and a fielder's choice with Will Hollis at the plate. Edmonton responded in the bottom of the inning and down to its last out kept its season alive on a walk-off two RBI single from Tyler Maskill.

Okotoks took the series opener Thursday night by a 7-2 score on the strength of a five-run eighth inning.

Ricardo Sanchez drove in the winning run on a suicide squeeze bunt with the bases loaded. Dane Tofteland homered earlier in the contest while Okotoks got 7.1 solid innings of work out of workhorse starter Nolan Ruff.

In the other Western semifinal, the Lethbridge Bulls and Medicine Hat Mavericks series is tied 1-1 with the Bulls hosting Game 3 Saturday night.

Out East, the Swift Current 57s swept the Weyburn Beavers in two games while Moose Jaw and Regina's series is tied 1-1.

For more information go to dawgsbaseball.ca