Dawgs go down swinging in Edmonton 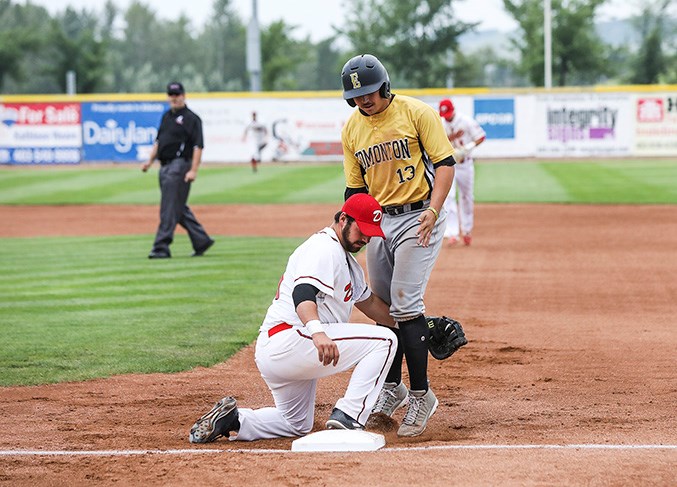 There’s experience and then there’s playoff experience. Having one and lacking the other can catch up to you in the second season as the Okotoks Dawgs were eliminated in the first round of the WMBL playoff by the Edmonton Prospects for the third straight year, this time in four games. “Honestly, I think it came down their playoff experience versus our inexperience,” said Dawgs pitching coach Joe Sergent. “They (the Prospects) have been together for four years, they had been able to eliminate us the previous two years and this year, same thing. “They had all the confidence in the world.” On paper the Dawgs were heavy favourites in the series with a 35-win season compared to the Prospects’ .500 record. Okotoks also dominated the season series, winning seven of eight contests. The postseason, is a different animal. “Everyone is going to look at our record and say it was an upset, but those guys were ready for us and we knew we were going to be in a dogfight,” Sergent added. “Having those guys have that (winning) playoff experience, to have them show the new guys that our record and their record means nothing and you can believe because it’s happened the last two years.” Edmonton harnessed the early momentum in the best-of-five series on the road. The Prospects took the series opener on July 31 by a 5-2 count, scoring four runs in the fifth inning and holding Okotoks to two runs on 10 hits at Seaman Stadium. The visitors looked to be well on their way to a blowout in Game 2 the following evening. Edmonton chased Dawgs’ first-team all-star starter Cody Ebert in three innings, and had a 9-2 lead through five innings. Okotoks responded with a five-spot in the sixth and charged back to make it interesting in the late innings, ultimately dropping a 10-8 decision. “There came a point in Game 2 where we were down 9-2 and you could start to see the energy getting down,” the coach added. “But we had a quick meeting during the game and we told them this game is between men and boys and do you want to be remembered here as a boy or do you want to be remembered here as a man? “They answered it and we went up there we made sure they weren’t going to walk all over us, that they were going to be in for a dogfight.” Spurred on by its pushback, the Dawgs’ fortunes changed in the capital city. Brock Townsend allowed three hits and one run in 6 2/3 innings as the Dawgs took Game 3 by a convincing 11-3 margin. Nate DeChaine, Abdiel Alicea and Will Hollis each drove in two runs while leadoff hitter Collin Ridout had four hits and four runs in the blowout win. “We finally decided to take the pressure off ourselves and started having fun again, started playing our brand of baseball,” Sergent said. Pitching would be the story in Game 4. Mesa College teammates Carter Robinson and Rich Walker competed in a pitcher’s duel for the ages with the Prospects eking out the 2-1 decision. “I thought it was excellent,” Sergent said of the Dawgs playoff pitching. “I know Cody had a bit of a hiccup in Game 2, but outside of that, we leaned on them all season and they showed up again in the playoffs. “This is by far the best staff I’ve ever had and it sucks to be going out in the first round when we had such a great staff.” Robinson, the Dawgs’ six-foot-eight hurler, allowed just one earned run over 7 2/3 innings of work on the mound. “Such a great playoff baseball game, back and forth, we’re scratching, clawing, trying to get a run and they’re the same,” Sergent said. “Their two runs were on a sac-fly and ours was on a wild-pitch. It showed how hard both teams were fighting. “It was tough you see guys like Eddie (Sanchez) playing in his final game and a couple other seniors, there was a lot of tears in our locker-room. It showed how far we came as a team and how much we were there for each other.” Edmonton and the top-seed Medicine Hat Mavericks battle it out in the Western Division Final. In the East, the Weyburn Beavers and Regina Red Sox duke it out. For more information on the Dawgs go to dawgsbaseball.ca