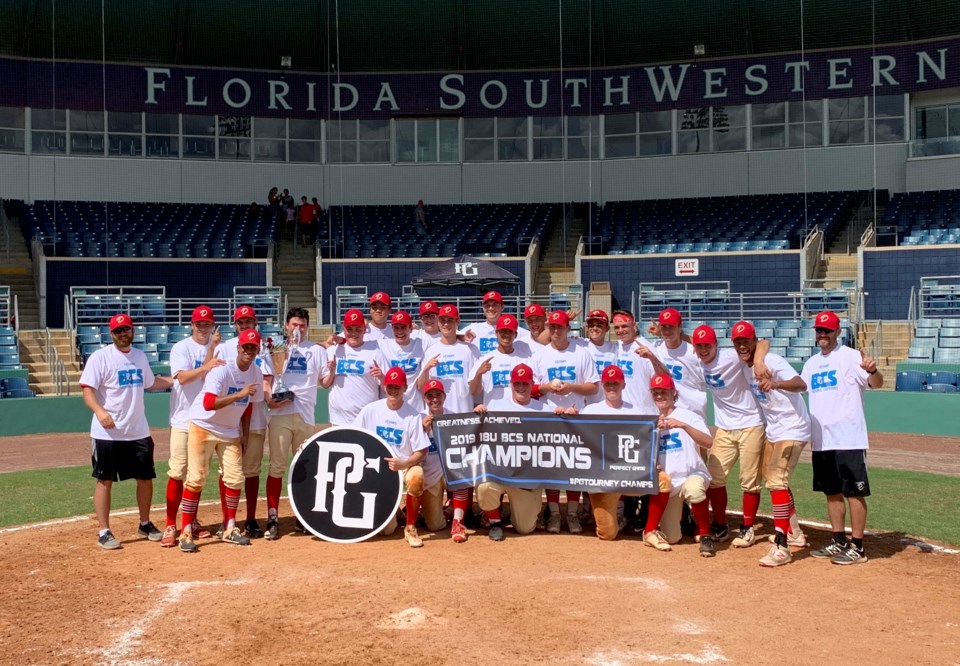 The Okotoks Dawgs Academy pose with the banner after winning the Perfect Game 18U BCS National Championship in Fort Myers, Florida on July 6. (Dawgs Academy Photo)

The Dawgs Academy pitched a perfect performance on the international stage.

Marking its debut at the Perfect Game BCS National Championship in Florida, the Okotoks Dawgs Academy 18U Black team took the title by running the table in Fort Myers with an 8-0 record against elite competition.

“It’s a big step in terms of getting the Dawgs name out there in a region we’ve never really been to before,” said Dawgs Academy coach Jeff Duda. “It’s pretty cool to be able to go down to Florida, a place we’ve never been to as an Academy, and go 8-0.

“Every kid on the team, every kid on the roster had a great tournament so it was great to be able to show off and let them know the Dawgs is a big program.”

Okotoks — the lone Canadian team in the competition — was downright dominant for large portions of the competition, scoring 70 runs and allowing three runs or less in seven of the eight contests.

“The kids up here in Canada we swing wood-bat year-round and it was a metal-bat tournament,” Duda said. “It wasn’t a surprise at all, the offence has been outstanding all year. Putting a metal bat in their hands, those doubles turn into triples and the triples turn into home-runs.

“Being the pitching coach, you expect more hits to fall in with the metal bats, but our pitchers were outstanding all week.

Matt Doberthien, a Dawgs 18U Red player who was picked up by the Black team for the tournament, was named the competition’s Most Valuable Pitcher.

“Matt was just always eager to get the baseball, he is definitely one of our top pitchers,” Duda said. “He’s a hyper-competitive kid, always wants the ball and doesn’t let any of the outside stuff affect him whether it’s someone cheering or talking smack.

“He’s constantly forcing the other team to swing the ball and he gets a lot of weak contact and a lot of bad swings and works very quickly which is huge in terms of keeping the defence on their toes.”

Leadoff-hitter Micah McDowell, an Oregon State commit, took home tournament MVP honours, hitting an impressive 8-for-19 with 1 home run, 6 RBI, 12 runs and 10 stolen bases while covering more ground in the outfield than a combine at harvest.

“He was the guy that gets the offence going, him and Ricky (Ricardo Sanchez),” Duda said. “The best thing about Micah is his quality at-bats, he does everything you want a leadoff hitter to do and then some in terms of working the count, making the pitcher work and top of that he can hit the ball out and steal second and third if he gets walked and turn it into a triple.

Okotoks got by Puerto Rico’s SBO Baseball 7-3 in the championship match on July 6.

Quinn Tocheniuk picked up the win, working 4 2/3 innings in relief of starter Jordan Lussier and holding the opposition to just one run.

Dryden Howse and Ayden Makarus led the offence with two hit games while Cesar Valero’s two-RBI double in the fifth inning proved to be the winning runs.

“Early on it was a very tight game,” Duda said. “It was tied up until the fifth at 2. You could kind of see the looks on the kids' faces in the dugout that they were maybe feeling a bit more pressure than usual.

“Val (head coach Val Helldobler) and myself both had talks with them throughout the game really to just try and calm them down. I think that was one of the biggest things in seeing how much these kids have really grown in terms of their maturity and being able to take that deep breathe, that step back and get locked back in and taking care of business.”

Okotoks got through round-robin undefeated and punched its ticket to the final by virtue of a 12-3 triumph over the FBH Angels with Alejandro Cazorla leading the bats with three hits and four ribbies and Matt Wilkinson picking up the win on the mound.
The 18U Dawgs Black have enjoyed a few championships this season, winning its home Mother’s Day Classic Tournament as well as the Langley Blaze Invitational earlier this season.

The Florida result was easily its biggest one to date.

“It’s been the biggest focus of the season thus far, from the moment we put the team together on March 1, we always talked about getting ready to go down to Florida,” Duda said. “It’s a place we’ve never been and Perfect Game is the apex in terms of baseball tournaments.

“To go down and do as well as we did, that’s going to gain us some really good exposure.”

The Academy will look to continue to pick up wins south of the border when it travels to Indianapolis for the 18U National Championship from July 17-21.

For more information go to dawgsacademy.ca