An Okotoks ballplayer has a spring in his step after a big hit against near big-league pitching.
Apr 4, 2018 12:00 AM By: Okotoks Western Wheel Staff 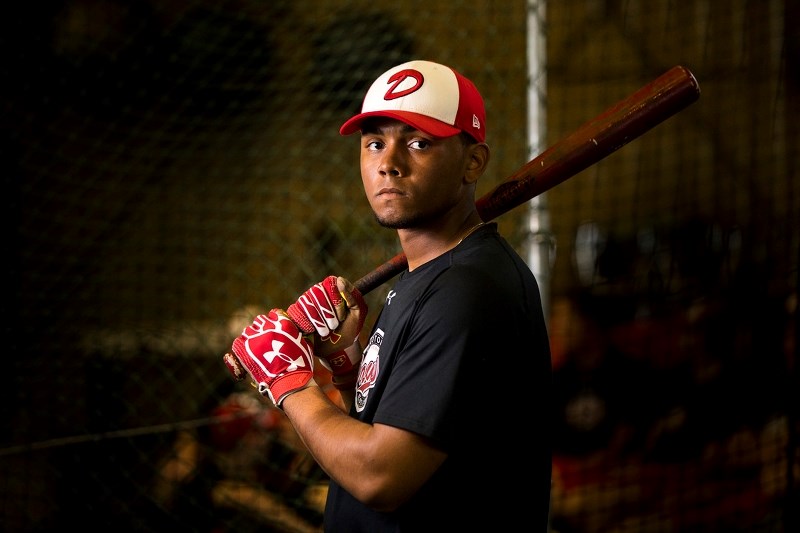 An Okotoks ballplayer has a spring in his step after a big hit against near big-league pitching.

“It was just crazy, playing in front of that many people,” Smith said. “When I went up to the plate, it was like Holy, this is real. I told myself: ‘Hey, I gotta do something.”’

Reality didn’t bite as Smith hit a fastball for a double.

“It felt really good hitting one down the line past Vladimir Guerrero Jr.,” said Smith, who grew up in the Spruce Grove area. “It was like: ‘Wow, this really just happened.’”

He got a chance to exchange some words with the top Toronto Jays’ prospect, whose father, Vlad Sr., was elected to the Baseball Hall of Fame in January.

“I go to third base and Vladimir Guerrero Jr. said ‘nice hit, Popi’” Smith said. “That definitely put a smile on my face.”

Smith and Okotoks Black Dawg infielder Cesar Valero made the trek to Florida for the five-game spring training stint with the national squad.

(Marcus Stroman got the start for the Jays and didn’t give up a hit, including against Okotoks Dawg Valero, who started at shortstop for Canada).

Smith has been on Team Canada’s radar for a while, he became more than a blip on the screen after a solid showing Toronto last fall.

“I had a really good Tournament 12 and from there it just kind of skyrocketed,” said Smith, who plays third base for the Dawgs. “I got a couple of emails and then I started getting more emails.”

When he got the official word he was selected for Team Canada, he had to make sure he wasn’t dreaming.

“It almost brought tears to my eyes — I had to pinch myself, I didn’t think it was real,” Smith said. “My older brother, Kobe Hyland, and I grew up wanting to play for my country and it finally happened. It was one of those moments when you have no words.”

The infielder had plenty of reason to smile after his second trip with the national team. The stint to the Sunshine State included games against prospects from the Philadelphia Phillies, Detroit Tigers and Tampa Bay Rays.

“I’m learning to be humble, keep a clear head and just keep learning,” said Smith, a Grade 12 student at Foothills Composite High School. “It’s humbling, you can’t get a hit every time off, but I learned I am really not that far off, I just have to get bigger, stronger and keep working.”

He estimates he had five hits in the trip.

Smith, who has committed to Indian Hills Community College, usually plays the hot corner for the Black Dawgs, but was playing second base for the stint in Florida.

It wasn’t a major adjustment.

“I have played up the middle for most of my life,” the 17-year-old Smith said. “To be honest it was kind of easy because I didn’t have to make such a strong throw,” he said. “From second, I could just show off my arm on a double-play.”

“They both had really solids weeks,” said Hamilton, a member of the Okotoks Dawgs Hall of Fame. “They both have the ability to swing the bat. They have tools that allow them to move up. We are looking favourable upon them moving forward with us.

“They accounted for themselves very well.”

Valero and Smith will be in Florida again later this month.

If everything goes well, they will be on the roster for the Junior National teams trip to the Dominican Republic in May.

The world qualifier for the Canadian Junior team is in the fall in Panama.

Valero is currently playing in the United States and was unavailable for comment.