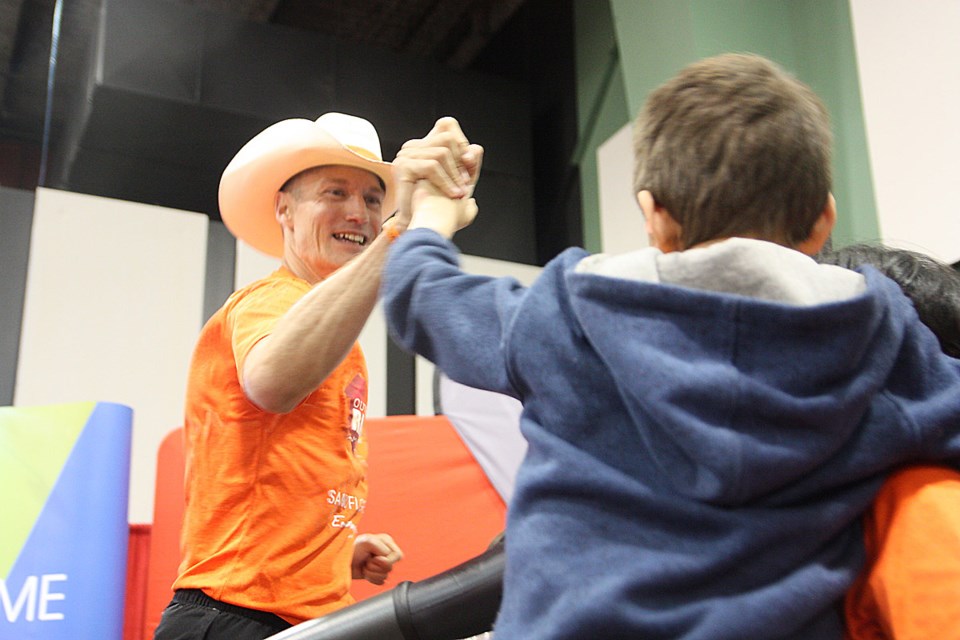 Okotoks ultra-marathor David Proctor, here high-fiving his son while breaking a long-distance treadmill record, has cancelled his Trans-Canada run to beat Al Howie's record of 72 days scheduled to start on Victoria Day. The cancellation was due to the COVID-19 pandemic. Proctor was raising money for the Rare Disease Foundation.

An Okotoks ultramarathoner’s record-breaking attempt to run across Canada to raise money to fight rare disease has been halted due to the COVID-19 pandemic.

“Everybody in the world is going through crisis management and trying to figure out how to run their businesses and operations,” said David Proctor. “It wasn’t in the greater community’s best interest to go about doing this.”

Proctor was planning to start his OutRunRare Cross-Canada run in St. John’s NFLD on Victoria Day. It was an attempt to break the late Al Howie’s 1991 record of running across the country in 72 days, 10 hours. Proctor announced he was cancelling the 2020 attempt on Friday. He is aiming to try again in 2021

He said attempting to run across the country at this point could endanger the very people he is trying to help.

“A lot of people in the rare disease community are immune compromised,” Proctor said. “If I got sick, I would be okay, but if my son (Sam), who has a rare disease (RECA, which affects Sam’s mobility), or even my parents got sick, the elderly, they probably wouldn’t be okay.

“It’s our responsibility as a community to look out for our most vulnerable. I would be putting the rare disease community at harm to go ahead with this campaign.”

He said the run would have produced support in some stops of hundreds of people – many who may have a rare disease or are In close contact with an individual who does.

“It just makes all the sense in the world to not do this,” Proctor said. “I can’t selfishly put my desire to break the trans-Canada speed record over and a top of other people’s health.

“That is just not okay.”

He said if he decided to proceed he would also put members of his support team’s health in jeopardy by being at large gatherings.

Proctor is an elite athlete with Canadian and International long-distance records. So after a year of training that would have Forrest Gump wondering how Proctor can run so many kilometres, it’s hard for the Okotoks runner to turn off the switch.

“I’ve been building mileage for the entire year and even just this morning, I ended up running 86km on my treadmill,” Proctor said on Sunday. “I don’t want to stop… My training is going very well and I am fitter than I have ever been.”

He said he may make an unofficial attempt to break his own Guinness Book of Record’s record for running distance over 24 hours on a treadmill.

“I don’t have time to get all the Guinness Book of Records authority stuff done, maybe I will just livestream the whole darn thing and do it on a random Thursday,” he said.

Proctor attempted to break Howie’s record in 2018. However, after starting in Victoria, he had to stop just east of Winnipeg due to a back injury. He has raised more than $300,000 for the Rare Disease Foundation over the years.

“I would tell you it’s going to come hell or high water, but hell and high water already came with the coronavirus,” Proctor said. “God willing, I will be able to do this. This maybe gives us some more time to get ready.”

“Our health care system, the media, everybody has bigger fish to fry than to follow some goofball running across Canada to draw our attention to rare disease,” Proctor said. “All of our attention should be on how to keep everyone safe.

“And I am really glad everybody is doing that.”