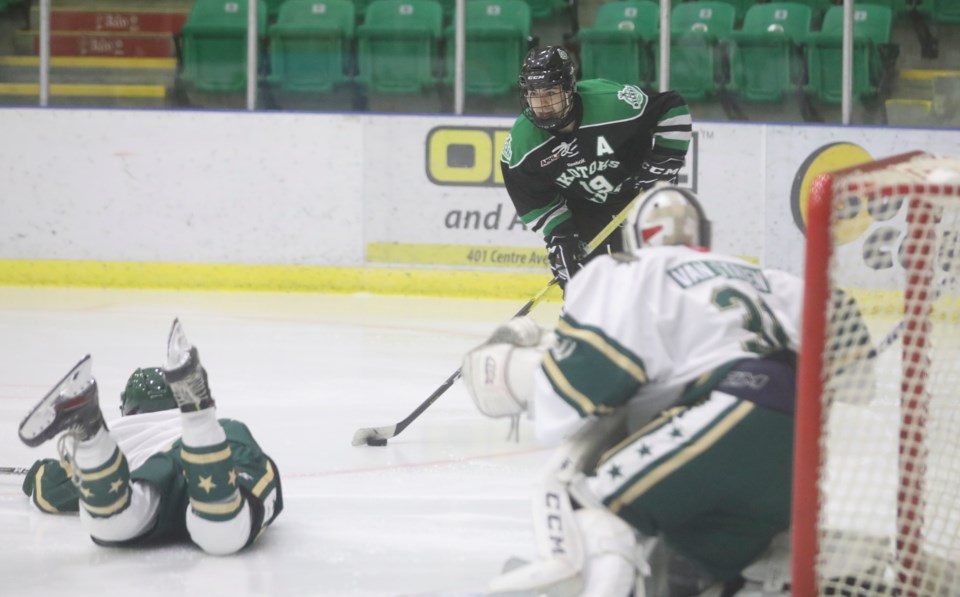 Poor puck luck and a tough middle frame stopped the Bow Mark Oilers from a winning start to the season.

The Okotoks Bow Mark Oilers made it interesting with a late pushback but fell just short in their Alberta Midget Hockey League home and season opener in a 4-2 loss to the Calgary Northstars Saturday at Pason Centennial Arena.

“We played pretty well in the third and at the end of the day had a couple breakdowns that cost us a couple goals,” said Bow Mark Oilers head coach Ryan Barrett. “But I thought we carried the play for most of the game. I’m not overly upset with the way we played, I’m just not overly happy with the outcome.”

Following a scoreless opening stanza, the visitors struck for three in the second period, including two goals in an 11-second span.

Ethan Aucoin scored on a breakaway, Alexey Trischuk added a powerplay marker and Brett Huxley scored on the following shift to give the Northstars the 3-0 lead.

“First period was very even, back and forth both ways,” said Bow Mark Oilers captain Sam Simard. “We battled hard, got the jitters out of a bunch of the guys coming up that hadn’t played in the league last year and they showed up.

“Really I feel like we lost the game in the second period. That’s where we let up, odd-man rushes, breakaways, (Mitch) Dudar stood on his head, but we couldn’t stop those.”

Okotoks reversed the script in the third period, showcasing the urgency it needed to wrestle its way back into the game.

Moe Hakim notched the team’s first goal of the season on the rush, picking the corner with a rolling puck with just over 11 minutes left in regulation.

It was a one-goal game less than two minutes later with Daxton Budd crashing the net and cutting the deficit in half.

“We had life there,” Simard said. “We just couldn’t quite seal the deal.”

Okotoks out-shot Calgary by a 32-22 count on Saturday.

The Oilers will shoot for their first win of the season on Oct. 6 when they travel south to battle the Lethbridge Hurricanes.

Okotoks is then home for an Oct. 10 date with the Calgary Royals and Oct. 12 showdown versus the Sherwood Park Kings.

“I’m super excited for this year,” Simard said. “We’ve got a good squad coming in, we’re all super close, a bunch of the guys played M15 together … We’re good friends, we’re good buddies and we have that chemistry.

“Something we were missing last year is we had certain groups and now we’re all together as one as a family and I feel like that’s going to be a huge contributing factor, having each other’s back on the ice.”

Earlier in the week, the Bow Mark Oilers announced the leadership group featuring all second-year members of the club with Simard — a multisport athlete as a football, basketball and badminton player at Foothills Composite — wearing the C, along with alternate captains Hakim and defenceman Lucas Watkins.

“Sam is a leader in the dressing room, he’s a leader amongst his peers,” Barrett said. “He has no problem being that guy who can step up in front. You saw tonight Lucas leads by example and Moe is another kid with the work ethic, the talent and the leadership in the dressing room that is something we look for in a captain.

“All three guys bring exactly what we need to the captaincy roles.”

For more information on the team go to ooaaoilerhockey.ca