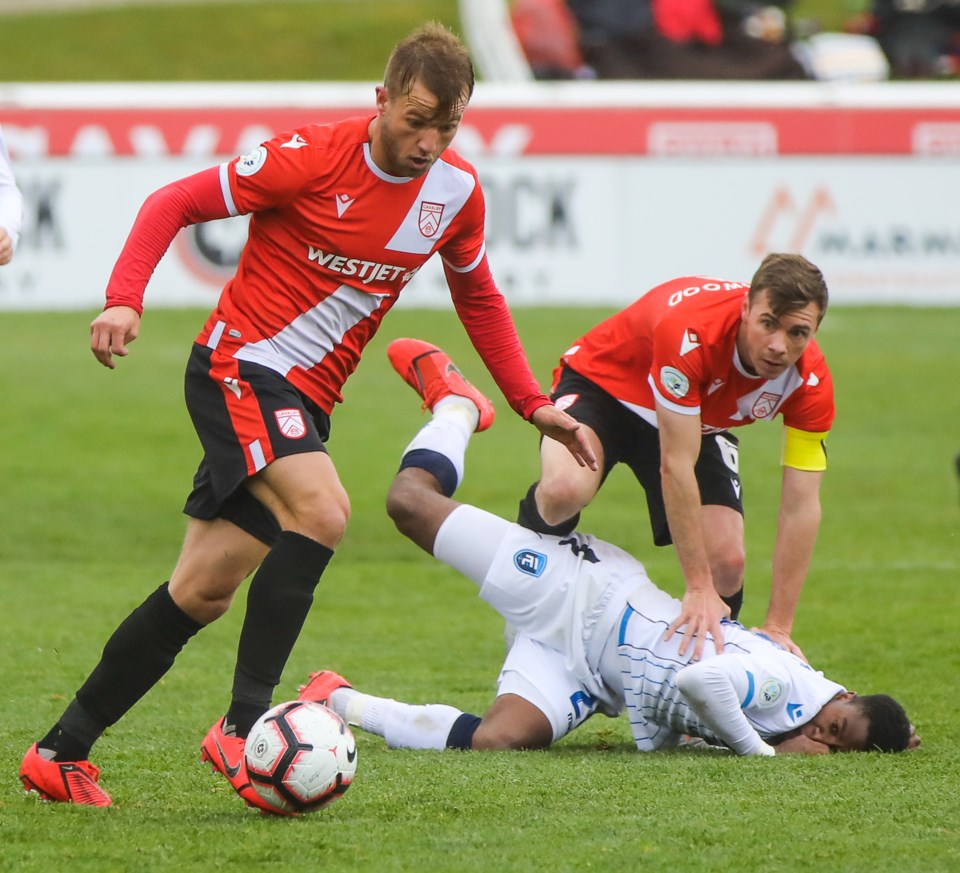 Cavalry FC's Nik Ledgerwood, right, had the lone goal in the 1-0 victory over FC Edmonton on Sept. 11. The win clinched the Wildrose Cup for Cavalry. (Brent Calver/WesternWheel)

Cavalry FC blanked FC Edmonton 1-0 Wednesday night in the capital city to clinch the Wildrose Cup, move to four games unbeaten versus their provincial foes and improve to 6-1-4 in the CPL’s fall season.

“We’ve got to be prepared for a battle,” Cavalry FC head coach Tommy Wheeldon Jr. told OneSoccer post-match. “It’s the Battle of Alberta against a rival that’s very physical, very tough to breakdown. We had to weather a storm, they’re a very physical team and when we stand up to that I think that’s why we’ve been successful.”

In a strong opening half, the visitors made the breakthrough from the spot.

Jose Escalante was brought down at the edge of the box by Edmonton defender Amer Didic leading to a penalty kick in the 26th minute.

Captain Nik Ledgerwood stepped up and delivered a strike low to the left side of Edmonton’s Connor James in goal, for the skipper’s third goal of the season and second in as many games after scoring to the right on a penalty kick the previous match versus Valour.

“I took a penalty last week, felt good, stepped up,” Ledgerwood said. “I know a lot of the keepers in the league watch previous penalties so I thought I would mix it up and go the other way.”

Goalkeeper Niko Giantsopoulos preserved the one-goal result with the clean sheet for the visitors in what was a game defined by discipline, or a lack thereof.

“It’s a horrendous penalty to give up, there’s no reason to go to ground there, the player is not going anywhere,” said FC Edmonton head coach Jeff Paulus. “A horrendous mistake on the penalty in a game that really had nothing in it at that point.

“I’m happy with the lads in the second half, really happy.”

The Cavs improved to 3-0-1 versus Edmonton in the CPL and made it four games without allowing a goal to the Eddies.

“You can’t take anything away from the Cavalry back line,” Paulus said. “They’ve given up the fewest goals all year, there’s not many teams that score against them. Yes, we’ve not scored against them, credit to them.”

Though the Cavalry have the Wildrose Cup sewn up, having already won the season series, the provincial foes clash once more in the fall season finale on Oct. 19 at Spruce Meadows.

The Wildrose Cup was created by the supporters groups of both teams.

“This is for the fans,” Wheeldon Jr. said. “They created it and they mean the world to us.”

The Cavalry, the spring season champions, sit one point back of Forge FC in the fall standings.

The top-team from each season advances to the CPL championship, though the winner of the fall season also gets to select which of the two legs it hosts.

For more information go to cavalryfc.canpl.ca