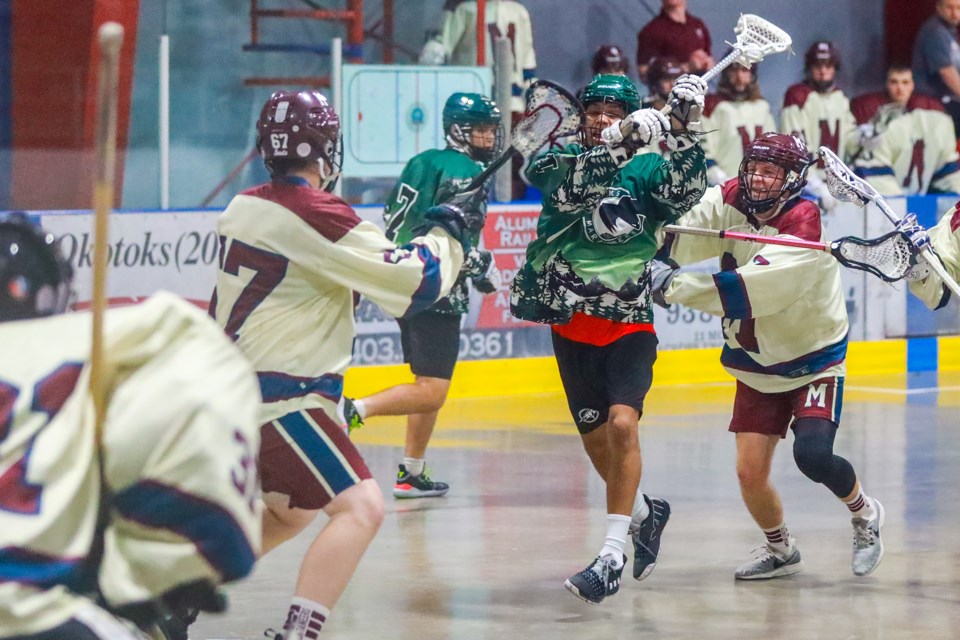 Okotoks Marauder Rylee Lapierre takes a shot against the Mountaineers at Murray Arena during the 2019 season. (BRENT CALVER/Western Wheel)

What could have been a milestone season for Okotoks box lacrosse is off the docket.

The Rocky Mountain Lacrosse League announced it was officially cancelling the 2020 season for all of its divisions, a move that impacts Okotoks’ Jr. B Marauders, Jr. Ladies Raiders and Sr. C Erratic.

It’s a particularly big blow for the Marauders who were set to host the Jr. B provincial championship this season, which would mark their first appearance on the stage, beginning at the end of July at the Murray Arena.

“It’s disappointing for sure, it really sucks, all the boys were really excited,” said Marauders head coach Don Haynes. “We were in a good spot especially with hosting provincials this year and we had a great draft with a lot of good kids coming into the program and that all being shutdown is definitely disappointing.”

The coach said he expects the hosting duties for the 2021 event to remain in Okotoks given that’s how much of the sport has operated with deferrals of provincial and national championships.

That’s good news because Okotoks put its roster together with an eye on the championships and having a team built to compete.

“It being the year we were hosted, we took a lot of the highest calibre kids in the draft,” the coach added. “Where in the past years where we were rebuilding we took guys that would be around for a couple of years and develop them.

“This year we scooped up a lot of guys who would probably only play one or two years in B before they go up to A. We had a lot of offensive talent coming in, which was a problem for us last year, scoring goals. We think we had that figured out and our defence we didn’t really have to change too much, we added maybe on guy back there.”

On the last line of defence the Marauders were in great shape with Calvin Pederson, Tyler Lowe and potentially Brendyn Kendall set to return in the crease.

“Our goaltending is pretty outstanding,” Haynes said. “We didn’t have to touch that either.”

Going forward, there’s some movement on the eligibility of junior players in their final seasons of lacrosse being granted another season to finish out their careers.

“There’s a lot of things up in the air right now,” Haynes said. “Carter, he’s a five year guy and I think could have probably played Jr. A, but wanted to do this fifth year with the boys. And Andy Fox is another guy who’s a leader in our room and just a great kid.”

Haynes said some of the contingency plans in place for a shortened 2020 season included a six-game regular season followed by a playoffs and then the Founders’ Cup, the national Jr. B championship – which was slated to be held on Brampton, Ont.

On May 28, the Canadian Lacrosse Association announced it was cancelling all national competitions for the 2020 season.

That includes the Minto Cup, the national Jr. A championship, which until this summer had run every year since the end of the Second World War.

The Okotoks Jr. A Raiders hosted the 2011 Minto Cup at Okotoks’ Pason Centennial Arena and were again co-hosts of the 2018 event at Calgary’s Max Bell Centre.

The 2020 Minto Cup was set to be held in St. Catharines, Ont. in conjunction with the 16U national box lacrosse championships in August.

The RMLL features teams in Alberta, Saskatchewan and Manitoba and a number who play out of the Calgary region.

In late April, the City of Calgary announced its facilities would be closed until at least July 31 with municipalities across western Canada making similar announcements.

“Losing an entire RMLL season is something that none of us has likely thought about,” said RMLL president Duane Bratt in a June 1 press release. “Then again, few of us would have foreseen the near total disruption of life in general. This presents us all with a number of difficult challenges to navigate over the coming months.

“Among those is all of us working together to keep the momentum in our game and our league so we can build a successful comeback lacrosse season in 2021.

“As a consequence of these decisions from government and lacrosse governing authorities, the RMLL, in consultation with, and the agreement of all the divisions, regrettably is formally cancelling its 2020 season. While there was some hope that some type of modified schedule could be maintained for July-August, that is no longer an option."

The Erratic, a fixture in the RMLL’s Sr. C ranks, finished with a 5-9-1 record last season. The Jr. Raiders were set to enter their fourth season in the RMLL having earned a top-four finish in their first three seasons.

For more information go to rockymountainlax.com.