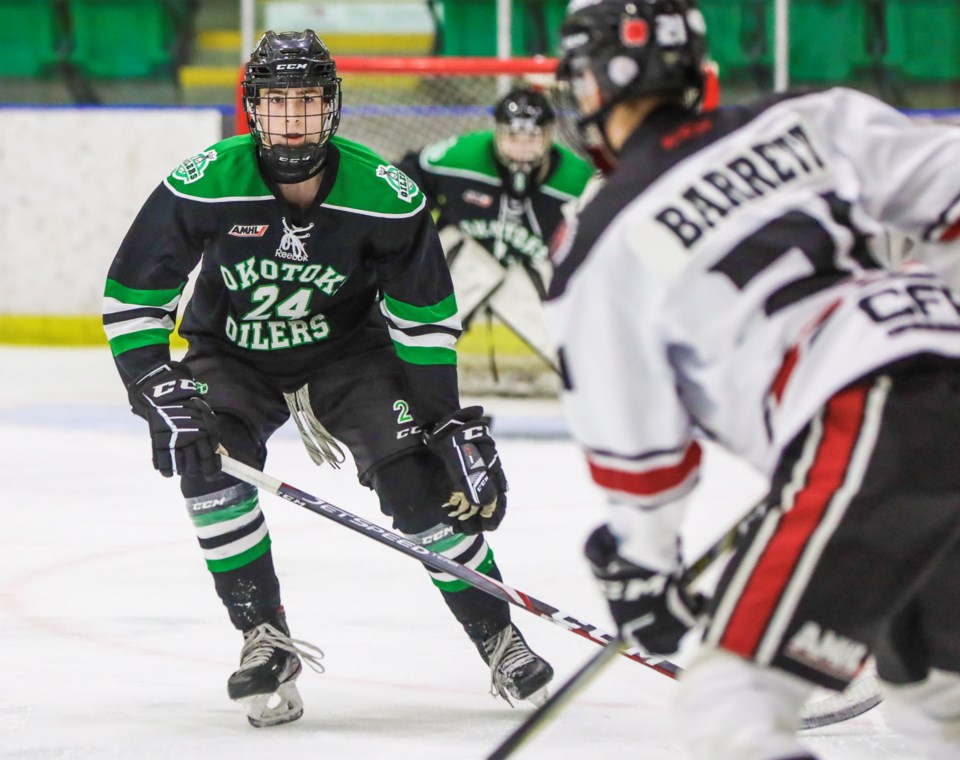 Okotoks Bow Mark Oilers forward Liam Watkins, one of four returning skaters on the team, will serve as captain in his second season with the hometown squad. (BRENT CALVER/Western Wheel)

When preparing for the unknown it’s best to stick to the familiar.

“I think we’re all just treating it like it’s a regular season right now,” said Bow Mark Oilers captain Liam Watkins, one of four returnees on the squad. “As soon as we get inside the rink nothing changes from any other year, we’re just getting on the ice practising, getting to know each other.

“Everyone on the team is really excited, we know who we’re up against and to perform how we should perform. It will mean a lot, right now we’re running practices and it will definitely be different hopping into games, it will be nice to play against other people that we’re not familiar against.”

There’s at least some familiarity between Okotoks and its first opponent.

The Oilers and Lethbridge Hurricanes will meet for the first time since the Canes took their opening round playoff series in three games to close the 2019-20 campaign. Okotoks opens it season on Oct. 15 with the Canes visiting Pason Centennial Arena for a 6:30 p.m. puck drop, the teams battling it out in Lethbridge the following night and back in Big Rock Country on Oct. 18 at 4:15 p.m.

“They’re really excited,” said Bow Mark Oilers head coach Ryan Barrett. “It’s like going to class all year and then you finally have to take that final exam and you want to know what you know and see how good you’ve got it.

“And for a coach you want to see what the team can do and have that competitive atmosphere which makes coaching a lot easier.”

The two-team cohort system will see AEHL teams play one another over a two-week period before a two-week hiatus to play other opposition.

“It’s basically a best-of-three that you play over a weekend span and then take the next weekend off,” Barrett said. “I think it’s going to be good and will create that strong rivalry, those three game series are fun and an attainable goal with these best-of-three series throughout the year.

“It’s something tangible that they can look forward to, winning all those series.”

Okotoks will meet division foes in the Airdrie CFR Bisons in early, the Calgary Buffaloes at the end of the month and the Calgary Northstars in late December.

The annual holiday classic, the Mac’s Tournament, has been cancelled this year due to the COVID-19 pandemic and the challenges of bringing in teams from different locales with the health and spectator restrictions still in place.

“Our team is going to be really strong this year,” Watkins added. “We’ve got most of the 15s team from last year that came off a pretty good season there and then we’ve got some Foothills and Strathmore guys that played AA last year and they’re strong. And then a few other returnees with me this year as well so we should be a really strong team this year.”

“It’s definitely an honour to wear a letter for any team, but especially for the team I was on last year, it’s definitely a big step for me,” Watkins said. “(The assistants) will all help me out this year with leading the team.

Barrett said the Oilers captains all bring their own element of leadership.

“Liam was basically a coaches pick, we knew we wanted him as our captain, we knew we could get a lot out of him in regards to leadership on the team,” the coach added. “With Poffenroth, he’s a second year guy that is very well liked in the room and he’s a very good hockey player and can lead from example and he’s also got a voice. Caden Scott, a returning guy and an excellent guy, he’s a glue type character and he brings a calming presence to a lot of guys and a pretty down to earth kid.

“And Conyr Hellyer, that kid is just a captain, he’s a leader and just does what he does, he’s not necessarily very vocal, but with what he does by example he’s worn captaincies on pretty much every team he’s ever played for.”

The AEHL’s schedule has also been released for its U15AAA and U16AAA divisions with the Okotoks Oilers squads set to get underway on Oct. 17 and Oct. 31, respectively.