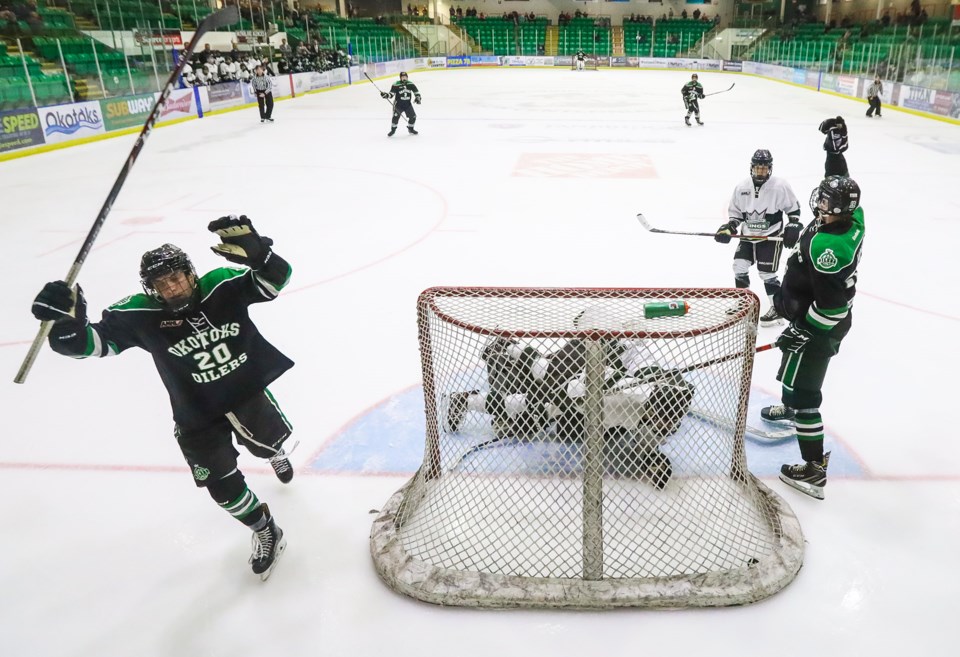 A local hockey rivalry will take new heights this week.

The Okotoks Bow Mark Oilers are hosting their inaugural Whiteout Game for Movember on Nov. 7 with the Airdrie CFR Bisons paying Pason Centennial a visit for an Alberta Midget ‘AAA’ Hockey League clash at 6:30 p.m.

“With our partnership with the Foothills Composite High School I know they’ve been doing them for years with the football teams, the volleyball and everything,” said Bow Mark Oilers general manager Lee Watkins. “With our players being partnered with the school there we thought it would be a good idea to extend that to the hockey team.

“We’ve partnered up with them. To try to get lots of fans out and whiteout the building and raise some money for the Movember campaign the boys have started.”

Admission is free with a donation to the Bow Mark Oilers Movember campaign, as well all proceeds from the 50/50 will go towards the campaign.

“Through the high school they’re selling t-shirts with the proceeds being donated as well,” Watkins said. “Anyone else that wants to come can also feel free to dress in whatever they have (in) white.”

The Nov. 7 contest features the two teams who used to be under the same banner.

Prior to the zone being re-drawn in advance of the 2017-18 season, Okotoks, Foothills and Strathmore area players all suited up for the CFR Bisons.

Okotoks was awarded its own zone in 2017 with the Bisons moving from Strathmore to Airdrie.

The Oilers go into the game tied for second in the South with a 6-3 record while the Bisons are eighth in the division at 0-8-1.

The Bow Mark Oilers are fresh off a two-day road trip which saw them fall 5-1 to the St. Albert Raiders on Nov. 2 followed by a 3-2 victory in Leduc over the Oil Kings the following day.

Anyone interested in making a donation to the Bow Mark Oilers Movember campaign can do so at the following link:

First, the Raiders were foiled by the Edmonton Pandas by a 3-0 count on Nov. 2.

Hali Lawrence made 19 saves for her second win of the season.

The Raiders are home this weekend to the undefeated St. Albert Slash on Nov. 9 at 2:30 p.m. and the Pandas on Nov. 10 at noon. Both games are at the Scott Seaman Sports Rink in Heritage Heights.

In Midget Elite action, the Raiders (4-2-0) skated to a 1-0 win over the Southern Express in a shootout on Nov. 2 in Heritage Heights.

Ellen Poelzer and Falyn Thomson combined for the 35-save shutout while Madeline Hubbard scored the lone goal in the shootout to clinch the victory.

The Raiders then fell 4-0 to the Calgary Fire.

For more information go to ooaaoilerhockey.ca