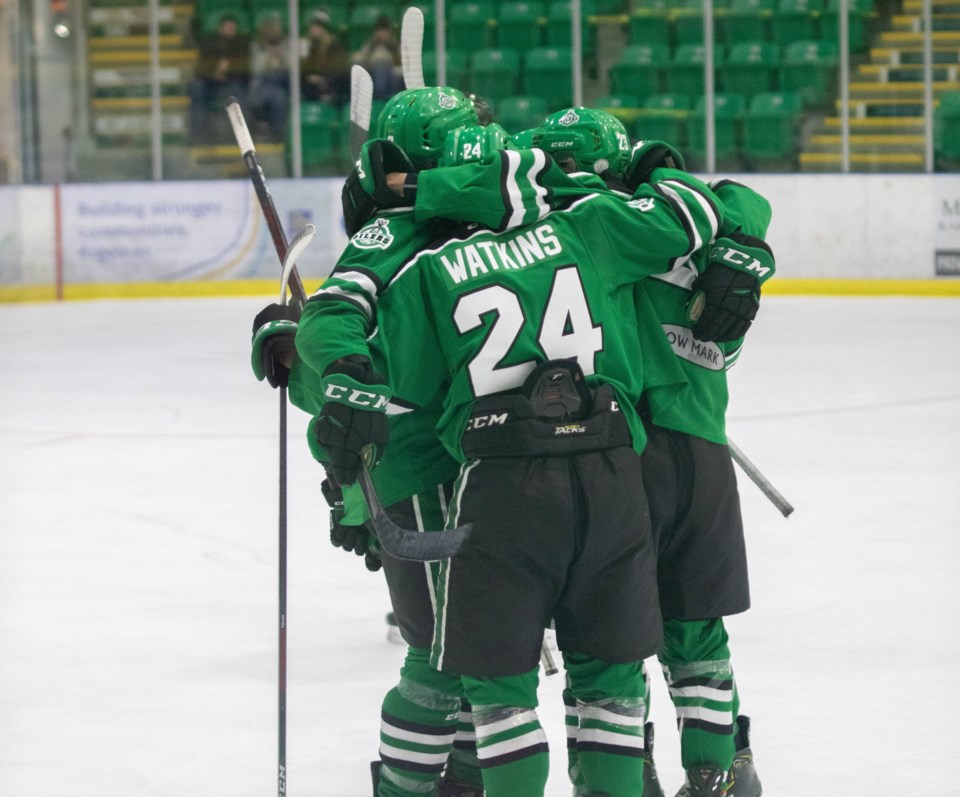 The Okotoks Bow Mark Oilers celebrate a first-period goal during their 6-5 win over the Airdrie CFR Bisons on Nov. 7 at Pason Centennial Arena. (Photo by Hogan Holditch)

The Okotoks Bow Mark Oilers paved the way to victory for the first time – but it wasn’t easy.

Following a similar script of lead changes and comebacks seen through the early stages of the Alberta Elite Hockey League U18 AAA regular season, the Oilers (1-1-3) held off a late surge from the Airdrie CFR Bisons to claim the 6-5 result Nov. 7 on home ice and pick up their first win in their fifth game of the campaign.

“It’s really big for us to get that monkey off our back and a good starting place where it’s only up from here,” said Bow Mark Oilers alternate captain Caden Scott. “We had a couple week layoff in between games, we worked really hard in practice and our goal every night is to play our best and win hockey games and I’m glad we managed to do that and hopefully we can keep rolling.”

Okotoks exploded with a four-goal first period with Adam Kirkpatrick and Liam Watkins each scoring twice to claim a 4-2 advantage after 20 minutes.

“We’ve got 12 forwards and six d-men that can all create offence,” Scott said. “That’s really big for us knowing we’re never out of a game and we can take over games with our offence.”

Connor Poffenroth tallied his fourth goal of the season and Easton Inglis scored what held up as the game winner on a power move late in the second period as Okotoks skated into the intermission with a 6-2 advantage.

The Bisons stormed back with three third-period markers to make it interesting as Ethan Tinevez and Shaw Cathcart talled in the final five minutes to produce the nailbiting finish.

“It’s a spot we really haven’t been in yet this season,” Scott added. “It’s definitely a learning experience for us and we’ll take from that, just try and be more aggressive and play more of our game and hopefully keep a bigger lead than we had and not let off.”

With ties being a trend this season it felt pretty good for the home squad to walk away victors.

“I just feel like we were starting slow and let little things slip through our fingers,” said Bow Mark centre Brody Spencer-Ha on the early season trends. “But luckily, (Saturday) we minimized those mistakes that cost us in other games and we were able to stop some of those goals that could have tied or lost us the game.”

Kashton Payne made 28 saves on 33 shots to pick up the victory in goal for Okotoks.

The Oilers likely carried momentum into the contest after securing a 4-4 tie the night prior in Airdrie after fighting back from a pair of two-goal deficits.

“It’s always good to get a comeback and it kind of boosted our confidence a bit knowing we could get a ton of goals really quickly if we had to, especially against this team,” Spencer-Ha said. “We just remembered the mistakes we made in the (second) game and made sure we didn’t make them as much.”

The Oilers and Bisons conclude the three-game set on Nov. 3 in Airdrie.

Following a two-week hiatus from game action, the Oilers begin a three-game set with the Buffaloes on Nov. 28 in Calgary.

The revamped schedule has allowed the Oilers to sharpen areas of the game that need extra-work, one perk of the different format in the 2020-21 campaign.

“During our practices we’ve been working on our battles, doing a lot of battle drills lately against each other,” Spencer-Ha said. “Just so we can win those little ones in the game in the offensive zone that can get us a goal and change the game and then also we’ve been working on just keeping that high guy because we were really weak on that, we would let guys go and they’d get breakaways.

“We were definitely working on that for the weeks before these games.”

For more information go to ooaaoilerhockey.ca.