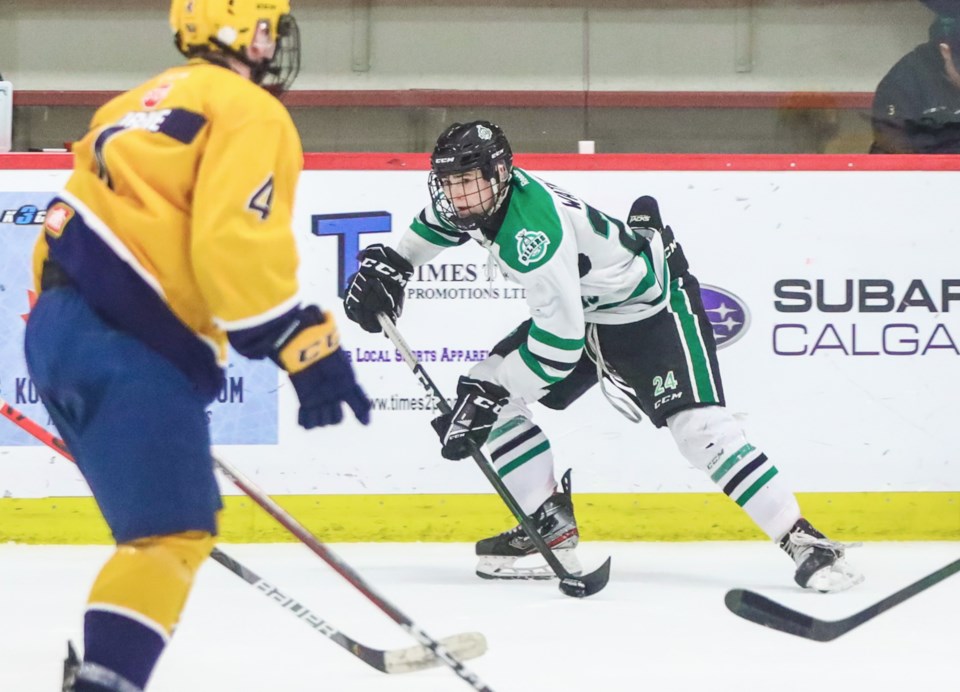 A local showcase helped paved the way to Division I hockey for an Okotoks star.

Okotoks Bow Mark Oilers captain Liam Watkins is headed to the Cornhusker State to play NCAA hockey at the University of Nebraska Omaha after turning heads closer to home.

“It started two years ago at this STIX showcase thing where a bunch of NCAA teams came to this little tournament that we did,” said Watkins, a Grade 11 student at Foothills Composite. “That’s when I first met them and we kept in contact ever since and I finally committed there.

“I just like everything about the program, great coaching staff, the facilities there are amazing and they have the right courses that I want to take. They’ve done their homework on me and I’ve done some homework on them.

“I feel it’s the right place for me to play.”

Watkins, a fourth-round pick of the Brandon Wheat Kings in the 2019 WHL Bantam Draft, played in many of the elite youth hockey milestone events coming through the ranks including the famed Brick Invitational and later starred at the 2019 Alberta Cup competition, helping Team South to a gold medal at the event.

“I just felt like this was the right time with everything I’m going through with my season this year,” said Watkins, a 2004-born centre. “They’ve shown a lot of confidence in me and think I’ll be the right player for them.

“It’s been a while now that I’ve known college would be the way to go, it gives me more time to develop as a player to get to the place I want to be.”

Fellow-Okotokian Kirby Proctor, a 2001-born defenceman, is a sophomore on the Mavericks.

“A couple days before I committed I shouted him out,” Watkins said. “I just asked him a couple questions about the school and how he balances hockey with the schooling and he didn’t have anything but good things to say about the place.”

“That was one of the reasons I wanted to go there,” Watkins added. “Because it was in the right conference and against all those really good teams like North Dakota and Denver it will be really good for my development.”

Prior to moving on to college hockey the Okotokian said he wants to improve his strength and speed in order to play at the next level.

Watkins leads the Bow Mark Oilers with 5 goals and 7 points through 5 games, and in parts of two seasons with the squad has 18 goals and 29 points at the 18U AAA level.

Liam skated with his older brother Lucas, a rookie defenceman on the AJHL’s Spruce Grove Saints, during his first year with the Bow Mark team.

“(My family) has always supported me from day one so I can’t thank them enough,”
Watkins said. “My brother is playing in Spruce Grove this year, he’s back in town and we’re practising two days a week so I will get to improve with him over the next month and a half here.

“Whenever we have ice together we always go against each other and it really helps me improve when I’m going into the corners against a big d-man and if I’m going down one-on-one against him.”

The Oilers have been sidelined from competition or in-person team events since the middle of November when team sports restrictions were put in place by the provincial government.

“It’s been weird, but twice a week we have Zoom calls as a team so we’re interacting with each other still,” Watkins said. “Everyone is doing their workouts so when we get back to playing here we should be in good shape and ready to go.”